Collection from National Archives, U.S. Holocaust Memorial Museum will be free to view in October. 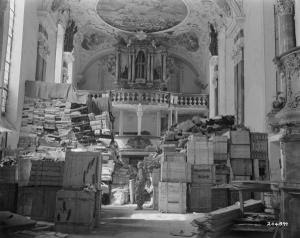 This photo from April 4, 1945, shows German loot stored in church at Ellingen, Germany, found by troops of the U.S. Third Army. It is an example of the images and documents on Footnote.com's new Holocaust Collection site. (Courtesy of Footnote.com)At the U.S. Holocaust Museum, it is a pile of shoes that powerfully drives home for many the scale of events in the Nazi concentration camps of World War II.

At Footnote.com's new Holocaust Collection site, it is the rows of portraits of men, women and children -- nearly 600 in all -- that are likely to invoke the same emotional response from visitors.

Scroll over this portrait and you learn it is of Ruth Huppert Elias of Czechoslovakia, who gave birth in a camp but was not allowed to nurse her infant as part of survival experiment; the child died.

That one: Idzia Pienknawiesz of Poland, who was 22 when she died in a concentration camp. Or this one, which turns out to be Fred Bachner of Berlin. Bachner was taken to Auschwitz and given the task of checking shoes for hidden valuables; he escaped in a transport train and was liberated in 1945.

The interactive Web site, located at www.footnote.com/holocaust, offers more than 1 million Holocaust-related documents. It is a collaboration between the National Archives and Records Administration, the U.S. Holocaust Memorial Museum and Footnote.com, based in Lindon.

"It really is a central gathering place for these documents to come together and tell the story," said Justin Schroepfer, Footnote.com's marketing director. "It is important that they not be forgotten, with the generations that are disappearing."

Footnote.com, founded in 1997 as iArchives Inc., is a privately held company that uses scanning technology to place newspapers and historical documents online. It charges fees for access and provides scanning services to other entities.

It has a partnership with Gannett Co., the largest U.S. newspaper owner, on anniversary projects about Woodstock and the Apollo moon landing.

Footnote.com buys copies of microfilms from the National Archives and digitizes them for use in searchable, interactive databases. The National Archives, which lacks funds to bring its collection into the online era, is allowing the Utah company to make commercial use of the digitized records for five years; the databases will then transition back to the archives' Web site.

The company has already created interactive databases on the Lincoln assassination, the Revolutionary and Civil wars, and the Great Depression.

Like those documents, the Holocaust records are available at archives' research centers in paper or microfilm format, which makes searching for specific records difficult.

"Working with Footnote, these records will become more widely accessible, and will help people now and in the future learn more about the events and impact of the Holocaust," said Michael Kurtz, assistant archivist of the United States in a statement.

Ron Smelser, a history professor at the University of Utah whose specialty is Nazi Germany and the Holocaust, said there is a growing awareness of and interest in the Holocaust that the collection will help meet.

"It's a wonderful idea, which means you don't have to fly to Washington," he said.

Access to the documents will be free during October. After that, access will be available only through subscription -- $79.95 for a year, $11.95 a month or $2.95 for a single image view.

The collection includes The Ardelia Hall collection, which catalogs artworks and artifacts seized by the Nazi and then taken into custody by the U.S. at the end of World War II.

There also are intelligence and interrogation reports; camp registration records and death books from Dachau, Mauthausen, Auschwitz and other camps; and proceedings of the Nuremberg War Crimes Trial.

Visitors can search for specific names and add information, comments, photos and other records and create individual pages.