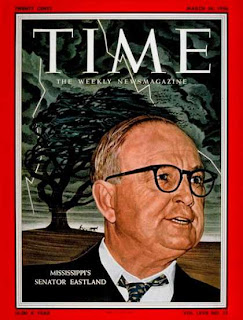 Nearly a quarter century after U.S. Sen. Jim Eastland's death, Klan leader Edgar Ray Killen still talks about the many jobs he did for the veteran lawmaker.

Former inmate Larry Ellis told the FBI that Killen talked repeatedly of tasks he did for Eastland, quoting Killen as saying, "There was not anything I would not have done for him. He made miracles happen for me. He was and will always be my No. 1 hero."

Killen is serving 60 years in prison following his conviction in 2005 in Neshoba County for orchestrating the Klan's June 21, 1964, killings of three civil rights workers.

Eastland's nephew, Hiram Jr. of Greenwood, said he doesn't believe Killen's claim that he knew Eastland. "I know for a fact the senator did not associate himself with people like that," he said. "And I guarantee he wasn't having Killen do anything illegal."

The senator regarded the killings as shameful, he said.

But in the days following their disappearances, Eastland repeatedly tried to convince President Lyndon Johnson it was a publicity stunt, telling him there was no Ku Klux Klan in Neshoba County. A month later, Eastland took to the Senate floor, saying a hoax was a real possibility if the trio remained missing.

Ellis told the FBI that Killen talked of thwarting communists in his work for Eastland, going across Mississippi and across the South.

Chris Myers Ash, author of The Senator and the Sharecropper about Eastland, said he wouldn't be surprised if "there's a kernel of truth" in what Killen is saying.
Eastland "had sources all over the place," Ash said. "He was such good friends with (FBI Director J. Edgar) Hoover that he could get access to FBI files."

That information, in turn, was shared with Mississippi's now defunct Sovereignty Commission and others, he said. "It would not surprise me at all that Edgar Ray Killen could operate under the radar and report back from hot spots. Eastland was very well informed about politics and civil rights activities."

In documents Killen wrote to Ellis, Killen talked of secret files he obtained through an unnamed friend in the Justice Department. "My friend never violated any laws by giving secrets away," Killen wrote.

His friend then forwarded them to another friend "who legally could see and use them," Killen wrote. "He gave them to me."

FBI records confirm Eastland had a relationship with the Klan.

Informants told the FBI that Eastland met with Klan leaders and courted the Klan's vote in his 1966 re-election race. The senator also talked with suspects in the Neshoba County case, including then-Sheriff Lawrence Rainey and defense lawyers, getting updates on the case.

In 1965, U.S. District Judge Harold Cox of Jackson - whose appointment to the bench Eastland engineered - threw out the indictments of all the suspects, except Rainey and his deputy, Cecil Price.

An FBI memo said Eastland, who was a college buddy of Cox, "has been taking credit for the federal government dropping charges against those indicted in the Neshoba County slayings."

According to the FBI, Rainey penned a letter saying, "I know for a fact that James O. Eastland helped prevent the trial of 16 other men."

A "prominent local Klansman" in Meridian told the FBI that Eastland had appeared at a rally in Forest and invited Imperial Wizard Sam Bowers to speak with him: "Eastland stated that he would help the 17 defendants in the Neshoba County case and that he has been 'pulling strings for them.' "

In a motion filed last year in U.S. District Court in Jackson, Killen discussed his relationship with Eastland, saying the senator called him shortly before the 1967 federal conspiracy trial and was told he was on his own.

Seven were convicted. Killen and Rainey were among those who walked free.
After the trial, Killen wrote that Eastland brought him FBI documents about the relationship between the FBI and defense lawyer Clayton Lewis. FBI documents show Lewis shared information with the FBI in 1964.

Killen's attorney, Rob Ratliff of Mobile, said Killen has shared stories about him and Eastland. "If they're even half true, they're incredible."

In documents identified as Killen's handwriting, he wrote he was never an Eastland employee, "but, yes, I worked for him."

In his later years, he softened his position and hired an African American to his staff, Ed Cole, who later headed the Mississippi Democratic Party. In 1985, months before he died, he wrote a letter to the late Mississippi NAACP President Aaron Henry, commending Henry for his persistent leadership "that has made recognition of a life that includes all mankind possible. I personally thank you for helping me to see the whole picture." He enclosed a $500 check for the state NAACP.

Eastland grew up in Hillsboro and was buried in Eastern Cemetery in Forest.

Killen, who grew up in neighboring south Neshoba County, said he developed a relationship with Eastland after becoming friends with Leander Perez, an arch-segregationist in Louisiana.

Documents from the Eastland papers at the University of Mississippi show Eastland and Perez shared information on purported communists.

Ellis told the FBI that Killen said his work for Eastland was "to stop the communist Jews or their soldiers."

Micki Dickoff, who interviewed Killen extensively for her award-winning documentary, Neshoba, said these statements attributed to Killen are consistent with what Killen told filmmakers.

Killen called Eastland "a second father," she said. "He told us he worked for Eastland for many years, 'bringing him proof,' and would do anything Eastland asked."

Killen made sure "we understood just how powerful Eastland was and that even President Johnson had to go to Eastland when he wanted something," she said. "There was no doubt in our minds that Killen had a close and personal relationship with the senator."

Deke DeLoach, a former deputy director for the FBI, said he knew nothing about his friend Eastland having any relationship with Killen.

Eastland never objected to the FBI's Neshoba County investigation, he said. "He was upset this happened in his state."

But longtime FBI agent Joe Sullivan, who headed the investigation, told The Clarion-Ledger before his 2002 death that Eastland complained to Hoover after the FBI started "an infiltration of Klan-type groups in Mississippi."

A lot of what Eastland did was not recorded, Ash said. "There was a back-room, verbal understanding."