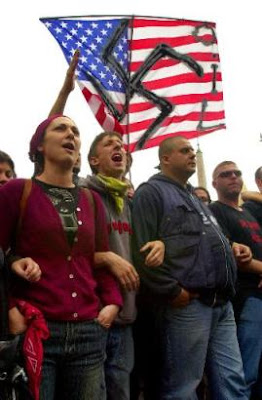 It's remarkably common for a grandson to take up his grandfather's major project. This occurred to me when I read recently of Thor Heyerdahl's grandson taking up his mission to cross the Pacific on a raft. But what really struck me was the BBC story aired on July 23rd, 2007, documenting President George W. Bush's grandfather's involvement in a 1933 plot to overthrow the U.S. government and install a fascist dictatorship. I knew the story, but had not considered the possibility that the grandson was trying to accomplish what his grandfather had failed to achieve.

Prescott Sheldon Bush (1895 to 1972) attended Yale University and joined the secret society known as Skull and Bones. Prescott is widely reported to have stolen the skull of Native American leader Geronimo. As far as I know, this has not actually been confirmed. In fact, Prescott seems to have had a habit of making things up. He sent letters home from World War I claiming he'd received medals for heroism. After the letters were printed in newspapers, he had to retract his claims.

If this does not yet sound like the life of a George W. Bush ancestor, try this on for size: Prescott Bush's early business efforts tended to fail. He married the daughter of a very rich man named George Herbert Walker (the guy with the compound at Kennebunkport, Maine, that now belongs to the Bush family, and the origin of Dubya's middle initial). Walker installed Prescott Bush as an executive in Thyssen and Flick. From then on, Prescott's business dealings went better, and he entered politics.

Now, the name Thyssen comes from a German named Fritz Thyssen, major financial backer of the rise of Adolph Hitler. Thyssen was referred to in the New York Herald-Tribune as "Hitler's Angel." During the 1930s and early 1940s, and even as late as 1951, Prescott Bush was involved in business dealings with Thyssen, and was inevitably aware of both Thyssen's political activities and the fact that the companies involved were financially benefiting the nation of Germany. In addition, the companies Prescott Bush profited from included one engaged in mining operations in Poland using slave labor from Auschwitz. Two former slave laborers have sued the U.S. government and the heirs of Prescott Bush for $40 billion.

Until the United States entered World War II it was legal for Americans to do business with Germany, but in late 1942 Prescott Bush's businesses interests were seized under the Trading with the Enemy Act. Among those businesses involved was the Hamburg America Lines, for which Prescott Bush served as a manager. A Congressional committee, in a report called the McCormack-Dickstein Report, found that Hamburg America Lines had offered free passage to Germany for journalists willing to write favorably about the Nazis, and had brought Nazi sympathizers to America. (Is this starting to remind anyone of our current president's relationship to the freedom of the press?)

The McCormack-Dickstein Committee was established to investigate a homegrown American fascist plot hatched in 1933. Here's how the BBC promoted its recent story:

"Document uncovers details of a planned coup in the USA in 1933 by right-wing American businessmen. The coup was aimed at toppling President Franklin D Roosevelt with the help of half-a-million war veterans. The plotters, who were alleged to involve some of the most famous families in America, (owners of Heinz, Birds Eye, Goodtea, Maxwell Hse & George Bush´s Grandfather, Prescott) believed that their country should adopt the policies of Hitler and Mussolini to beat the great depression. Mike Thomson investigates why so little is known about this biggest ever peacetime threat to American democracy."

Actually, if you listen to the 30-minute BBC story, there is not one word of so much as speculation as to why this story is so little known. I think a clue to the answer can be found by looking into why this BBC report has not led to any U.S. media outlets picking up the story this week.

The BBC report provides a good account of the basic story. Some of the wealthiest men in America approached Marine Corps Major General Smedley Butler, beloved of many World War I veterans, many of them embittered by the government's treatment of them. Prescott Bush's group asked Butler to lead 500,000 veterans in a take-over of Washington and the White House. Butler refused and recounted the affair to the congressional committee. His account was corroborated in part by a number of witnesses, and the committee concluded that the plot was real. But the names of wealthy backers of the plot were blacked out in the committee's records, and nobody was prosecuted. According to the BBC, President Roosevelt cut a deal. He refrained from prosecuting some of the wealthiest men in America for treason. They agreed to end Wall Street's opposition to the New Deal.

Clearly the lack of accountability in Washington, D.C., did not begin with Nancy Pelosi taking Dubya's impeachment off the table, or with Congress' decision to avoid impeachment for President Ronald Reagan (a decision that arguably played a large role in installing Prescott Bush's son George H.W. Bush as president), or with the failure to investigate the apparent deal that George H.W. Bush and others made with Iran to not release American hostages until Reagan was made president, or with the failure to prosecute Richard Nixon after he resigned. Lack of accountability is a proud tradition in our nation's capital. Or maybe I should say our former nation's capital. I don't recognize the place anymore, and I credit that to George W. Bush's efforts to fulfill his grandfather's dream using far subtler and more effective means than a military coup.

Bush the grandson took office through a highly fraudulent election that he nonetheless lost. The Supreme Court blocked a recount of the vote and installed Dubya.

Prescott's grandson proceeded to weaken or eliminate most of the Bill of Rights in the name of protection from a dark foreign enemy. He even tossed out habeas corpus. The grandson of Prescott, that dreamer of the 1930s, established with very little resistance that the U.S. government can kidnap, detain indefinitely on no charge, torture, and murder. The United States under Prescott Bush's grandson adopted policies that heretofore had been considered only Nazi policies, most strikingly the willingness to openly plan and engage in aggressive wars on other nations.

At the same time, Dubya has accomplished a huge transfer of wealth within the United States from the rest of us to the extremely wealthy. He's also effected a major privatization of public operations, including the military. And he's kept tight control over the media.

Dubya has given himself the power to rewrite all laws with signing statements. He's established that intentionally misleading the Congress about the need for a war is not a crime that carries any penalty. He's given himself the right (just as Hitler did) to open anyone's mail. He's created illegal spying programs and then proposed to legalize them. Prescott would be so proud!

The current President Bush has accomplished much more smoothly than his grandfather could have imagined a feat that was one of the goals of Prescott's gang, namely the elimination of Congress.