The ultimate goal of the far-right for the past 80 years, since Mussolini conceived of fascism, has been open fascist rule. Presumably, a majority of Americans will, in time, speak unabashedly of their allegiance to fascism. Can't happen here ? Recently, we've had Sarah Palin quoting domestic Nazi Westbrook Pegler before a national audience at a convention with the theme of America First, an allusion to a movement that gave the Germans a free pass to engage in world conquest, code words for totalitarianism. Italy, the uncubator of fascism, may be ahead of the United States, but give it a few more years and fascists stateside will have open rule, too, and outbursts like this will be commonplace. We're almost there ... - AC 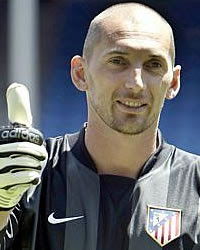 One of Silvio Berlusconi's players at AC Milan has declared he is a fascist. Christian Abbiati, 31, an Italian international, said: "I am not ashamed to proclaim my political beliefs. I share [the] ideals of fascism, such as the fatherland and the values of the Catholic religion."

The goalkeeper's remarks, published today in Sportweek magazine, come amid debate over Italy's fascist past and rightwing present under the leadership of AC Milan's billionaire chairman. The minority partner in Berlusconi's parliamentary alliance, the Freedom People, is a party spun out of the country's neo-fascist movement. Some members remain unabashed apologists for the dictatorship of Benito Mussolini.

The defence minister, Ignazio La Russa, sparked a row this month after he paid tribute to Italian soldiers who fought alongside German troops in the second world war. His comments came after the mayor of Rome, Gianno Alemanno, told a magazine he did not consider fascism an "absolute evil". Berlusconi dodged a question on his own views, replying: "I think only of working to resolve the problems of the Italian people."