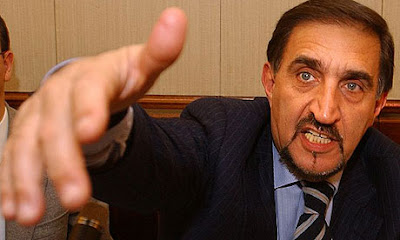 Italy's defence minister yesterday paid tribute to fascist soldiers who fought in Italy alongside German troops during the second world war, inflaming a row prompted on Sunday when Rome's mayor refused to condemn fascism as evil.

Speaking at an anniversary event marking Rome's resistance to Nazi occupation in 1943, the defence minister, Ignazio La Russa, yesterday chose to stress the patriotism of those Italians who fought against the advancing allied forces.

A day earlier, the mayor of Rome, Gianni Alemanno, a former neo-fascist youth leader, told the newspaper Corriere della Sera he "did not and never has" considered fascism to be "absolute evil". That definition he saved for the racial laws passed by Italy's fascist government in 1938, which removed Jewish Italians from state jobs. "Fascism was a more complex phenomenon. Many people signed up in good faith," he argued.

Alemanno's comments drew criticism from the Italian Jewish community leader Renzo Gattegna, who said: "The racial laws were created by the fascist regime, and it therefore seems difficult to separate the two."

The leader of the centre-left opposition, Walter Veltroni, reminded Alemanno that Mussolini had destroyed Italian democracy before 1938; Veltroni also said he was resigning in protest from a committee, overseen by the city, to plan a Holocaust museum.

Both La Russa and Alemanno are members of Italy's National Alliance party, which has evolved from its "post-fascist" roots to join the political mainstream. It is now a coalition partner in the government of Silvio Berlusconi, which has been accused of a crackdown on immigrants and Gypsies since taking office in April.

Alemanno appeared to be on the retreat yesterday at the anniversary of the anti-fascist defence of Rome, claiming he had not sought to condone the "anti-democratic" tendency of the fascist government. But his party colleague, La Russa, then stood up to keep the row alive.

"I would betray my conscience if I did not recall that other men in uniform, such as the Nembo from the RSI [Italian Social Republic] army, also, from their point of view, fought in the belief they were defending their country," the minister said in a speech.

Anna Finocchiaro, the Senate opposition leader, said: "There is no such thing as good fascism and bad fascism."

After the allied landings in Sicily in 1943, Mussolini was dismissed by Italy's King Victor Emmanuel III before setting up the Italian Social Republic in the north, from where the allied advance was checked. As the Germans retreated in 1945, Mussolini was killed by Italian partisans.