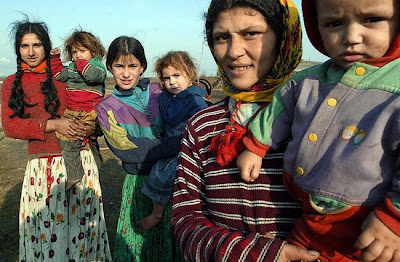 In Rome, police in battle dress have evacuated Gypsy settlements and prevented children from going to school, and the city’s rightwing mayor, Gianni Alemanno, is having fingerprints taken of those who remain. In Milan, Silvio Berlusconi’s government has appointed a “commissioner extraordinary for the Roma emergency” and enforced ID checks for people entering their camps. In Naples, the police charged a settlement with Molotov cocktails, forcing families to flee; the faces of the terrified children were seen on television screens around the country that evening. “I see institutionalised racism here,” said Luciano Muhlbauer, the Milan regional councillor for the Communist Refoundation Party. The mayor of Venice, Massimo Cacciari, went further: “If they continue like that, they’ll be a threat to democracy.” Cacciari, a leftwing mayor, asked for social housing for the Roma but district committees, controlled by the right, turned him down. He is an exception among leftwing mayors who like to outdo the Northern League and the National Alliance when security is an issue, and deport the Romanian Roma, fine beggars and patrol the neighbourhoods.

The government seems to use the same racist language used in bars. According to sociologist Alessandro Dal Lago: “Economic and existential uncertainties, fear of the future, and the end of European illusions, are all channelled against foreigners and Gypsies. Cynical politicians everywhere exploit discontent to win favour. It costs them nothing. Add to that the short-sightedness of the ‘moderate left’, who have made things worse by undermining the antifascist foundations of the First Republic. They cried over the fascists who died in Salo (1) as though those fascists hadn’t died fighting partisans and collaborating with the Nazis, making it easier to exterminate Jews, antifascists, homosexuals and Gypsies.”

The Prodi government was the first to deport Balkan Roma, despite their European citizenship, when it enacted an ad-hoc decree requested by the former mayor of Rome, Walter Veltroni, after a Roma had murdered an Italian woman. The security package approved by the Berlusconi government on 21 May merely used and reinforced that decree, adopted by the centre-left government shortly before it lost the elections. “All the Slav Roma who found refuge in Italy during the wars in Yugoslavia have lived in limbo up to now,” explained Santino Spinelli, university professor and world-famous Roma musician. “But if the law makes illegal immigration a crime, then instead of obtaining refugee status, they’ll go to prison.”

Some 150,000 Gypsies live in Italy, 70% Roma and Sinti with Italian nationality. The others are Slav Roma from the Balkans, or Romanians who arrived after the fall of Ceausescu. “Under the Ceausescu regime,” explained Spinelli, “the Roma had houses and equal rights. But the change of system revoked the privileges of the working classes, and the Roma were in the front line. They were the first to lose their work and their homes and were forced to migrate. That’s how they ended up in camps in Italy, victims of a new form of apartheid.”

Giovanna Boursier, historian and journalist, is a specialist in the Balkan Roma camps. “As far as the Roma are concerned, we have used the wrong words to justify the wrong solutions, dictated by stupidity or private interest. By investing money to prop up the dilapidated shantytowns, without looking at the issue from a global point of view, we ended up institutionalising a ghetto and perpetuating cultural stereotypes that are easy to demonise. Hence the Roma’s scapegoat status. But we are ignoring the long history between Italy and a large section of the Roma and Sinti population, as well as the massive cultural exchanges.”

In an effort to reverse the xenophobia and bleak stereotypes, Spinelli has become a party leader. He headed the first Roma and Sinti demonstration in Rome on 8 June, with nearly 10,000 participants, mostly Roma, but with many supporters from the left (which recently lost the elections) as well as Catholic grassroots organisations and social centres. “I hope 8 June will remain a day of Roma pride,” said Spinelli. “Now, together with the Sintis and all the other groups that make up our people, who are in harmony with all religions, and have never declared war, we will set up a national coordination against all racism. We want to take in hand our relations with institutions and associations, without any false friends. But we are badly in need of real ones.”