Impoverishment of the Middle Class and the Rise of Fascism

"It should never be forgotten that the one decisive factor in the rise of totalitarianism on the Continent, which is yet absent in England and America, is the existence of a large recently dispossessed middle class." — Friedrich A. Hayek, "The Road to Serfdom" 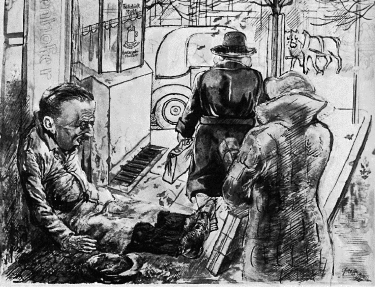 The above words were published in 1944, when Nazi Germany was in its death throes. They directly relate, however, to the early 1930s and the utter collapse of the Weimar Republic. ... Hitler's ascension to supreme power in Germany was by way of the ballot box. It is most unlikely, however, that the rise of Nazi Germany and the horrors of World War II ever would have darkened the pages of history had the great German middle class not been so savaged by years of blunder and neglect during the Weimar Republic.

And that brings me to the current crisis in America. The "weak dollar" policy followed by the Bush administration, a policy facilitated by the Federal Reserve, already has destroyed the accumulated wealth of many hard-working Americans. They have seen their savings, the market value of their homes, the income from their investments, and the purchasing power of their dollars plummet in direct proportion to the failure of this administration and the Congress to protect and further their financial interests. What makes it even worse is the essential dishonesty of government to acknowledge the severity of the present crisis and the damage it already has done to the American way of life and the American dream.

Look no further than the projected budget deficit the next administration will inherit from the present one. It's said to be $482 billion, but that doesn't include the $10 billion a month being poured down the drain (my characterization) in Iraq. The deficit is also based on what many believe to be wildly optimistic forecasts of economic growth, this at a time when the U.S. economy is in near free fall. The official "core rate" of inflation (excluding energy and food) is said to be a very modest 2 percent or so. To pretend that in any way reflects increases in the cost of living working Americans face would be laughable if not so tragic. The true rate of inflation in America today is well in double-digit range. If you don't believe this, you haven't been doing your own shopping at the supermarket, or pumping your own gas.

Is it any wonder that polling numbers for both the president and the Congress are at historic lows? ... Could the reaction to all this be a dramatic turn toward totalitarianism, such as occurred in Germany in the pre-World War II years? And if so, from what part of the political spectrum would that turn come? ...

R.L. Schreadley is a former Post and Courier executive editor.