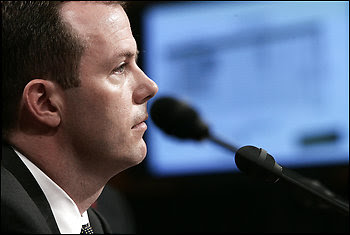 Former lobbyist Kevin A. Ring, shown at a Senate panel hearing in 2005, said through his attorney yesterday that the government is trying to pressure him to provide evidence against others involved in a public corruption scheme. (By Alex Wong -- Getty Images)

Former lobbyist Kevin A. Ring was arrested yesterday on conspiracy, fraud and obstruction-of-justice charges in connection with his alleged role in a four-year scheme to lavish tickets and trips on lawmakers and government officials in return for help for his clients.

Ring, 37, had worked hand in hand with disgraced lobbyist Jack Abramoff on behalf of Indian tribes that sought to operate gambling casinos, describing the efforts in boastful private e-mails later used by prosecutors to build a criminal case against the lobbyists, according to an indictment unsealed yesterday.

Ring, a former aide to Rep. John T. Doolittle (R-Calif.), made a brief appearance yesterday in the federal courthouse in the District. Through his attorney, Ring pleaded not guilty and criticized the government, saying it was trying to pressure him to provide evidence against others.

"While Mr. Ring had been cooperating with officials for over two years, he simply could not plead guilty to crimes he did not commit," lawyer Richard A. Hibey said in a statement. "From that point, he was deemed uncooperative. Based on his decision to proceed to trial rather than plead guilty, Mr. Ring, his family, and his attorneys expected this indictment."

Authorities accused Ring of arranging campaign contributions for Doolittle, who is referred to as "Representative 5" in court papers, and of lying to investigators hired by Ring's former employer about his knowledge of a lucrative consulting job that lobbyists had arranged for the lawmaker's wife, Julie. Ring and Abramoff treated Doolittle's staff members to rock concerts, football games and meals at pricey restaurants, prosecutors say.

The indictment says Doolittle asked another lawmaker to write a letter to the Army Corps of Engineers in support of earmarks for one of Abramoff's clients, threw his weight behind a bill to grant Puerto Rico statehood status that would have benefited another client and opposed an anti-gambling measure that would have hurt one of Ring's clients.

In October 2000, Ring wrote Abramoff an e-mail describing Doolittle as "such a good soldier, doing everything we asked of him. . . . I know you are great about making sure he gets his fair share of contributions, but if [client] is feeling generous, this would be a very opportune time to get something" to him, according to the indictment.

Abramoff and Ring hosted fundraisers for Doolittle at the Capital Grille, a D.C. steakhouse, and arranged for Doolittle's wife to be paid $96,000 for fundraising and bookkeeping services, the indictment alleges.

Abramoff was sentenced to four years in prison last week for his role in the alleged conspiracy. Prosecutors have secured 13 guilty pleas in the corruption scandal centered on him.

Neither John Doolittle, who announced that he would not run for reelection after investigators raided his home last year, nor Julie Doolittle has been charged with a crime. Their attorneys issued a statement yesterday in which they "steadfastly" maintained their clients' innocence and questioned the strength of the allegations in the indictment.

"It is clear that portions of the Kevin Ring indictment were designed to make gratuitous references to the Congressman and his wife," David G. Barger and Michael R. Sklaire wrote. "This appears to have been done to titillate the public, with the foreseeable and therefore intended consequence of attempting to embarrass and pressure the Congressman."

Ring worked closely with Robert E. Coughlin II, a former legislative affairs official at the Justice Department who pleaded guilty to criminal conflict of interest in April for accepting meals and tickets from the lobbyist in exchange for advancing his clients' causes with other friendly officials at the department. Both men had worked on Capitol Hill for then-Sen. John D. Ashcroft (R-Mo.), who went on to serve as attorney general from 2001 to 2005.

At one point, Coughlin had served as deputy chief of staff for the department's criminal division, and several officials there have been recused from the case because they worked alongside him. The matter is being handled by career lawyers in the fraud and public integrity sections, the U.S. attorney's office in Maryland and the acting principal deputy of the criminal division.

Ring met with investigators more than 20 times and talked for more than 100 hours about his work with Abramoff. But the cooperation appears to have ended last year. That is when Justice Department lawyers "insisted that Mr. Ring plead guilty to various fraud and corruption-related offenses and to implicate others as the price of leniency," Hibey wrote.

Hibey said that he and others tried to arrange a way for Ring to turn himself in but that authorities ignored the request. They arrested Ring at his home in Kensington yesterday morning. Hibey said the arrest "is a harbinger of the overreaching that will characterize the government's prosecution of him."