The Nazi Invasion of Lodz 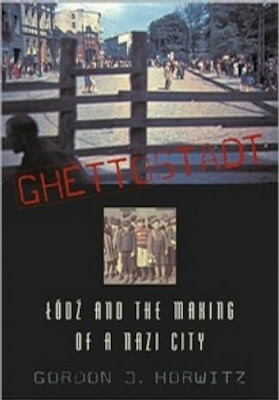 A heart-rending account of the devastating impact the Nazi invasion had on the lives of the Jewish inhabitants of the Polish city of Lodz, writes Carla King

A FRIEND RECENTLY enthusiastically described 19th-century Lodz as "the Manchester of Poland", referring to its importance as a tex- tile-manufacturing city, its rapid growth and bustling atmosphere. A significant contribution to its dynamism came from its Jewish community, which made up around one-third of the city's population by the outbreak of the second World War, the majority being non-Jewish Poles, with other ethnic groups (including Germans) accounting for smaller proportions.

Though represented at all social levels, from the great industrialists and merchants, to a lively middle class, the bulk of the Jewish community was made up of poor artisans, craftsmen and employees in the clothing industry. Lodz Jewry had a vibrant cultural life, with Yiddish and Polish-language daily presses, artists and writers, cabaret and theatre.

The impact of the German invasion in September 1939 was immediate and, for Jewish residents, devastating. Within a fortnight Hitler was in the city and attacks on the Jewish community commenced. At first, direct and violent: physical abuse, looting, humiliation, coupled with legal curtailments of their rights; by the end of the year a plan had been elaborated for a complete restructuring of those parts of Eastern Europe already in Nazi hands.

Jews within the occupied areas were to be marginalised into ghettoes, while ethnic Germans living in the Soviet Union, the Baltic States and Eastern Poland were to be resettled in cities within the greater Reich. Thus the creation of the Lodz ghetto, early in 1940, was part of a wider scheme to Germanise the city, first known to the Nazis as Lodsch and subsequently renamed Litzmannstadt after a German Great War commander and Nazi supporter, Karl Litzmann.

While past historians of Nazi policies tended to focus on their destructive aspect, recent research has frequently highlighted what they were aiming to achieve. Horwitz effectively locates the treatment of Lodz's Jews within an, albeit perverted, idealism that planned to transform the city into a showcase German urban environment, the sixth largest in the Reich, with new houses, parks, sports facilities and theatres.

Its Polish residents were to be shunted out to designated areas in the suburbs but the confinement of the Jews to a ghetto to the north of the city, where they would be contained and controlled, was envisaged as indispensable to the public hygiene of the city, the Jewish population being portrayed as unclean, an immediate source of contagion to the rest of its inhabitants. Pending some unspecified arrangement - the Final Solution had not yet been elaborated - they were to be confined within a ghetto.

The process of establishing the ghetto was very rapid. By May 1st, 1940, those of Lodz's Jewish community who had not managed to escape, some 163,777 people, were corralled into a zone four kilometres square, sealed by barbed wire fences and patrolled by both Jewish police and Gestapo. The book's name refers to the ghetto-city that emerged, with bureaus for housing, care of orphans, a welfare bureau, a health department administering five hospitals, a schools department, a supply department to control the receipt, storage and distribution of food and fuel, a finance and economy division, a workshops bureau, a judicial system with a police force, prison and court system, and a central secretariat, headed by the ghetto's leader, Mordechai Chaim Rumkowski. A ghetto orchestra was eventually formed and a newspaper published.

Drawing on an impressive range of sources, including memoirs, diaries, Nazi material, such as administrative records, and contemporary film footage of the city, Horwitz traces the history of the ghetto from its establishment in 1940 to its final liquidation in August 1944, just four months before the Red Army entered the city. The main figure in the account is Rumkowski - arrogant, self-important, sexually predatory, but determined to ensure the survival of as many of the ghetto inhabitants as possible, and to that end, willing to cooperate with the Nazis.

He quickly realised that the only hope for survival was in the ghetto's inhabitants representing a source of income to the Nazis. Drawing on the skills of its people, workshops were established providing a range of goods, from furnishings to clothing, footwear and leather goods, paper products, metal works and millinery. Nevertheless, starvation and disease dogged the ghetto, with rising mortality levels, coupled with suicides of the despairing. The ghetto had to cope with an influx of almost 20,000 further people, Jews and Gypsies, brought from other parts of Europe.

Then, at the beginning of 1942, the deportations commenced. First the Gypsies disappeared from the ghetto; then the first batch of deportees was selected by the Resettlement Commission and shipped off, officially to an unknown destination, but in fact to the death camp at Chelmno. When possessions belonging to those executed were reclaimed by the Nazi administration and brought back to the ghetto for processing, workers employed in sorting them were able to recognise items and to realise that something had befallen their owners. In September 1942, the deportations specifically targeted the elderly, the infirm and children under 10. Adam Czerniakow, head of the Warsaw Jewish Council, faced in July 1942 with an order to assist in assembling children and others for deportation took his own life, but of course this didn't halt the process.

In Lodz, Rumkowski, faced with the same demand, presented their surrender as an inescapable sacrifice in the interest of saving at least a part of the community, and a total of 20,000 young, old and ill, were handed over, dragged from screaming, pleading parents and relatives, those resisting or discovered hiding shot on the spot. Throughout, Rumkowski gambled that he might, by cooperating with the Nazis and by supplying them with valuable sources of skilled labour, manage to preserve at least a remnant, if they could last out until the end of the war. Ultimately he lost, and he too perished with the liquidation of the ghetto, joining the transport when it became clear that he could not secure the freedom of his own relatives. Only a very few Jewish survivors remained when the Red Army reached the city.

In alternating sections, Horwitz provides a counterpoint between the burgeoning city of Litzmannstadt and the ghetto, the Nazi administration in the one, to take an example, cherishing its children, providing them with the best of schools, summer camps, sports facilities, and celebrating them, while simultaneously deporting and shooting the children of the other.

Horwitz, who is associate professor of history at Illinois Wesleyan University, has, in an earlier book, a study of the public's attitude to the Nazi concentration camp at Mauthausen (In the Shadow of Death: Outside the Gates of Mauthausen, 1991) pointed out the indifference and even hostility to the inmates on the part of much of the surrounding Austrian population. But here in Western Europe, a society that routinely deports refugees and asylum-seekers to face possible torture, imprisonment or death, have we any right to be complacent? Will future generations condemn our indifference as we wonder at the behaviour of the citizens of Litzmannstadt?

Beautifully produced, and well-illustrated with contemporary photographs, this is a powerful, though at times a heart-rending account that must be put alongside Harold Marcuse's Legacies of Dachau: The Uses and Abuses of a Concentration Camp (2001) and Arno J Mayer's Why Did the Heavens Not Darken: The "Final Solution" in History (1988) as an indispensable source for anyone trying to comprehend this appalling time in European history.

• Carla King is a lecturer in modern history at St Patrick's College, Drumcondra
Posted by Alex Constantine at Monday, September 15, 2008