People Convicted in the Abramoff Investigation 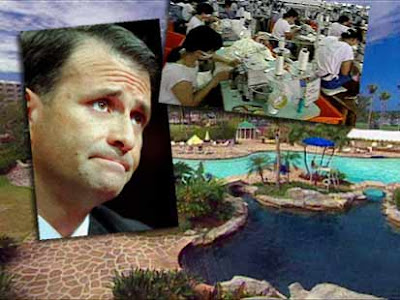 • Abramoff was sentenced Thursday to four years in prison on charges of mail fraud, conspiracy and tax evasion. Since pleading guilty in 2006, the once-powerful lobbyist has cooperated with the federal investigation of influence-peddling in Washington. He is nearly two years into a six-year prison sentence in a criminal case out of Florida, where he pleaded guilty in January 2006 to charges of conspiracy, honest services fraud and tax evasion in the purchase of gambling cruise boats.

• John Albaugh, a one-time top aide to former Oklahoma Rep. Ernest Istook pleaded guilty to conspiracy to defraud the House as part of the scandal. Albaugh admitted in federal court in Washington that he accepted meals and sports and concert tickets, along with other perks, from lobbyists in exchange for official favors. He is cooperating with investigators.

• Robert E. Coughlin II, a Justice Department official, pleaded guilty to conflict of interest. He admitted in federal court in Washington that he accepted meals, concert tickets and luxury seats at Redskins and Wizards games from a former Abramoff associate, lobbyist Kevin Ring, while helping the lobbyist and his clients. Coughlin is cooperating with investigators.

• Italia Federici, co-founder of the Council of Republicans for Environmental Advocacy, was sentenced to two months in a halfway house, four years on probation and a $74,000 fine after agreeing to help federal investigators. She pleaded guilty to tax evasion and obstruction of a Senate investigation into Abramoff's relationship with officials at the Department of Interior.

• Former Rep. Bob Ney, R-Ohio, sentenced to 2 1/2 years in prison, acknowledged taking bribes from Abramoff. Ney was in the traveling party on an Abramoff-sponsored golfing trip to Scotland at the heart of the case against former White House official David Safavian. Ney was released in August — a year early — after completing treatment for alcohol problems.

• Former Deputy Interior Secretary Steven Griles, the highest-ranking Bush administration official convicted in the scandal, was sentenced to 10 months in prison for obstructing justice. He admitted lying to a Senate committee about his relationship with Abramoff, who repeatedly sought Griles' intervention at Interior on behalf of Indian tribal clients.

• David Safavian, the Bush administration's former top procurement official, was sentenced to 18 months in prison in October 2006. Safavian, the only scandal defendant to take his case to court, was found guilty of covering up his dealings with Abramoff. In July, a federal appeals court overturned his conviction. The Justice Department plans to retry him.

• Michael Scanlon, a former Abramoff business partner and DeLay aide, pleaded guilty in November 2005 to conspiring to bribe public officials in connection with his lobbying work on behalf of Indian tribes and casino issues. He is cooperating with investigators.

• William Heaton, former chief of staff for Ney, pleaded guilty to a federal conspiracy charge involving a golf trip to Scotland, expensive meals, and tickets to sporting events between 2002 and 2004 as payoffs for helping Abramoff's clients. He cooperated with investigators and was sentenced to two years probation and a $5,000 fine.

• Neil Volz, a former chief of staff to Ney who left government to work for Abramoff, was sentenced to two years of probation, 100 hours of community service and a $2,000 fine after pleading guilty to conspiring to corrupt Ney and others with trips and other aid.

• Mark Zachares, former aide to Rep. Don Young, R-Alaska, pleaded guilty to conspiracy. He acknowledged accepting tens of thousands of dollars worth of gifts and a golf trip to Scotland from Abramoff's team in exchange for official acts on the lobbyist's behalf.

• Roger Stillwell, a former Interior Department official, was sentenced to two years on probation in January after pleading guilty to a misdemeanor charge for not reporting hundreds of dollars worth of sports and concert tickets he received from Abramoff.

• Former Abramoff business partner Adam Kidan, sentenced in Florida in March 2006 to nearly six years in prison for conspiracy and fraud in the 2000 purchase of the Fort Lauderdale-based SunCruz Casinos gambling fleet.