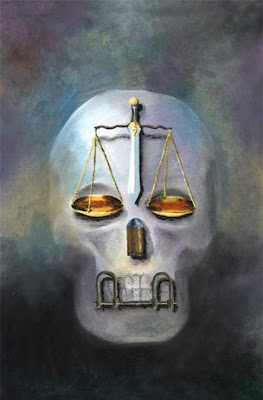 For a designated national monument, Risiera San Sabba, in Italy, is not an easy place to find. While road signs in Trieste routinely point you toward restaurants, hotels, roman ruins, the town center, Castle Miramare, and so on, we saw only one sign for San Sabba, at the bottom of a long list of arrows pointing to other cultural destinations. This is not a surprise. The citizens of the city are probably not all that eager to be reminded of the former Nazi concentration camp in their midst.

In the end, we had to ask at the bureau how to get there, and even with her explicit directions it was hard to find. It’s a nearly entirely unmarked building down a small street that’s a difficult turn to see coming off the autostrada. The humdrum brick structure stands innocuously enough in a somewhat rundown part of town, down the street from a soccer stadium and next to a Lidl discount supermarket. A circus was set up around the corner. I happened to park our rental car next to the bricked over windows of a chamber now called “the death room,” where new inmates were processed by the Nazis amid corpses waiting to be cremated. Only a small plaque by the long gray corridor into the complex marks the site’s significance now, unless you count the swastika someone painted on the highway riser back by the autostrada. The fact that the site is a national monument but all but invisible suggests strongly the tension between remembering and forgetting that seems to characterize attitudes toward World War II atrocities and the methods by which the Holocaust was carried out within view of the ordinary life of civilians. Apartment buildings still stand in the blocks that surround San Sabba; they probably stood when the horrors were being carried out.

San Sabba’s ordinary exterior is a large part of what is awful about it now. It seems a perfect representation of the matter of fact way the Nazis assimilated killing into industrial organization. The building was originally a rice-husking factory; when the Nazis occupied the city they simply converted it into a different, horrific kind of factory, retrofitting in prison cells (some of which still remain) and installing a crematorium (which they dynamited as they fled when the city was liberated in 1945). At the site now, there are commemorative inscriptions, sculptures meant to evoke the crematorium smoke rising, an exhibition detailing the history of the Nazi occupation of the region, and a grim collection of inmate uniforms, confiscated property, a replica of a truncheon used to beat inmates to death, grainy photographs of the perpetrators. It wasn’t a lot to see, but it was enough. I started to understand why the place was so hard to find. Though we made a special effort to tour the place, I wanted nothing to do nothing but forget what I had seen after we left; I stayed up late that night watching whatever bad shows I could find on Slovenian television to keep my mind off it all. I never expected to be so grateful for old episodes of The X Files.