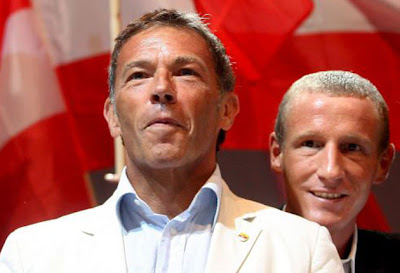 The truth comes out! Twenty-seven year old Austrian politician Stefan Petzner admitted this week to having a long-term affair with his recently deceased boss, Jörg Haider (seen in the foreground).

Though it's long been rumored, the murmurs of Haider's homo ways were revived last week after photographers spotted him at a gay bar just minutes before he was involved in a fatal car crash.

Taking Haider's spot as leader of the ultra-right Alliance for the Future of Austria this week, Petzner told a radio host that he and Haider began their relationship a few years ago, but promises that Haider's wife knew about their goings on - and didn't give a hoot:

[Petzner] effectively outed himself as the deceased’s gay lover while being interviewed on an Austrian radio breakfast show.

“I had to go to him. I had to go to him,” Mr Petzner said in his highly emotional interview as he recalled how he rushed to the hospital where the dead body of 52-year-old Haider was lying after his fatal crash in early October.

Admitting that he felt a “magnetic attraction” for Haider, whom he met five years ago while working as a cosmetics reporter, Mr Petzner insisted: “We had a relationship that went far beyond friendship. Jörg and I were connected by something truly special. He was the man of my life.”

He insisted that Mr Haider’s widow, Claudia did not object to his relationship: “She loved him as a woman. He loved her as a man. I loved him in a completely different and personal way. She understood that,” Mr Petzner said.

Other sources claim, however, that Mrs. Haider hated that the men spent so much time together.

Meanwhile, Alliance leaders have canceled Petzner's planned interviews in hopes that the scandal will blow over, a prospect that's looking less and less likely.