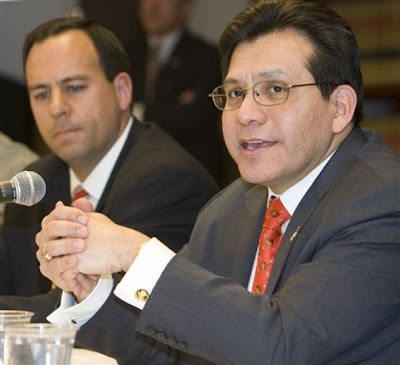 March 26, 2007: U.S. Attorney Troy Eid (left), who is accused of having called the FBI off of an alleged Obama assassination plot, seated next to U.S. Attorney General Alberto Gonzales during a discussion of Project Safe Childhood, sponsored by the Dept. of Justice in Denver.

"KUSA - 9Wants to Know has learned three men in Denver planned to assassinate U.S. Senator Barack Obama during the Democratic National Convention in Denver by sneaking into one of his events and shooting him with a gun hidden inside of a camera, according to federal court records. Nathan Johnson's girlfriend, whom 9NEWS is not naming because she's a juvenile, said it would have to be a suicide mission."

... The FBI released a statement the next day claiming that there was no evidence of an imminent threat against Obama.

But according to [one] news story ... the FBI did want to pursue charges, but the investigation was called off by Attorney General Troy Eid, an appointee of Karl Rove.

There are several recent blogs on this info, but only one story on Google's news page:

KUSA - 9Wants to Know has learned three men in Denver discussed assassinating U.S. Sen. Barack Obama during the Democratic National Convention in Denver by sneaking into one of his events and shooting him with a gun hidden inside of a camera.

Nathan Johnson's girlfriend, whom 9NEWS is not naming because she's a juvenile, said "it would have to be a suicide mission," according to federal court records. The plot is similar to that in the 1992 movie "The Bodyguard" starring actors Kevin Costner and Whitney Houston. In the movie, Costner stops an assassination attempt against Houston by spotting a weapon hidden inside a gutted-out TV camera.

Johnson, Shawn Adolf and Tharin Gartrell all thought that Obama had a suite in the third floor of the Hyatt hotel, where they were staying. In fact, Obama was staying in another Denver hotel.

The men were doing methamphetamine inside the hotel with two women on Aug. 23 discussing the plot to kill Obama, according to federal records.

Adolf said, "It would not matter if he killed Senator Obama because police would simply add a murder charge to his pending charges," according to the records.

There were seven outstanding warrants for Adolf's arrest.

The underage woman told law enforcement that Adolf also talked about using "a high-powered rifle 22-250 from a high vantage point" to shoot Obama during his acceptance speech at INVESCO Field at Mile High.

One of the other women in the room, Kay Neb, told police she believes Adolf is affiliated with the Sons of Silence white supremacist group. Neb also told police that Adolf, Johnson and Gartrell are all racists because they made racially disparaging comments about Obama.

The Sons of Silence is a motorcycle group with chapters across the country.

"We don't know these people, we are not associated with them in any way and we don't want people like this in our group," said a spokesman for Sons of Silence.

The group also says it has no ties to white supremacists.

Based on the evidence, FBI special agent Robert Sawyer first believed there was probable cause to believe the men were conspiring to kill Obama.

The men were charged with various weapons and/or drug charges.

Aurora Police found two rifles, ammunition, bulletproof vests, walkie-talkies, wigs and fake identifications in the pickup truck that Gartrell was driving when they pulled him over Aug. 24. One of the weapons was stolen from Kansas.

Police also found a Wizzinator inside the pickup truck, which is a device made of a prosthetic penis and synthetic urine to cheat on drug tests.

Eid is denying any lax work on his part, but I think the whole situation still sounds suspicious. Why would you NOT press charges against people who make a threat on a public official? Who is he to determine (above the inquiries of the FBI) that such a threat would definitely not be pulled off?

Here's one of several blogs about the story: