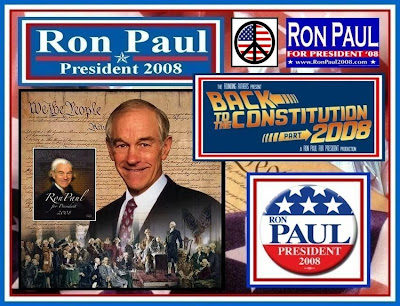 Also see: "The Early Days of the John Birch Society: Fascist Templars of the Corporate State" (scroll down)

Dr. Ron Paul, Texas congressman and 2008 Republican presidential candidate, was the featured speaker Saturday evening, October 4 on the final day of the John Birch Society's 50th Anniversary Celebration. The topic of his keynote address was "Restoring the Republic: Lessons From a Presidential Campaign," in which he lectured the audience on how our republic can be restored with groups such as the John Birch Society (JBS) and his own Campaign for Liberty leading the way.

During his introduction, JBS President John McManus explained that Dr. Paul was known as "Dr. No" on Capitol Hill because he had voted against so much unconstitutional legislation over the years. When Dr. Paul took the podium, he said that his wife had reassured him that it was okay to have that nickname, as long as everyone understood that it was spelled with a "K"!

Dr. Paul made evident his affection for the JBS by stating at the outset, "I am delighted to help celebrate this birthday." And when he moved on to talk about his first successful campaign for Congress in 1976, he said, "I'm sure there are people in this room who probably helped me in that campaign, because I know that so many of you have over the years." He then described his first press conference at the Capitol Hill Club, during which an antagonist from Houston asked him, "Mr. Paul, are you a member of the John Birch Society? Have you ever been a member of the John Birch Society?"

In reviewing his 2008 presidential campaign, Dr. Paul stated that he was reluctant to run in the primaries, despite being urged by many to do so, because he did not feel that enough preparatory work had been done. But he was surprised to see the response at the rallies, especially from the young people. He gave credit to the JBS for keeping alive the freedom fight through its programs to educate and motivate the American people. He went on to point out that the JBS had planted a lot of seeds over the years and that his presidential campaign was able to tap into the sentiment that sprouted from those efforts.

Not only were Dr. Paul's campaign rallies bigger and more positive than he had expected, but he marveled at the varied background of his supporters, who came from all parts of the political spectrum. From this, he concluded that freedom is popular and brings people together. The antithesis of freedom is big government, which causes people to divide into groups and to fight against each other for a bigger share of the pie, or to push the burden of government from one group onto another.

Throughout his speech, Dr. Paul kept referring to "the remnant," which he described as those who remember and respect the values upon which the United States was founded: self-reliance, personal responsibility, limited government, sound money, the gold standard, etc. He claimed that the important role the JBS has played was to nurture that remnant and added, "The remnant holds the truth together, both the religious truth and the political truth."

As the eldest presidential candidate, Dr. Paul was curious to find out why so many young people were joining his campaign. The most frequent responses he got ranged from the very general, "It sounded like you were the only one telling the truth" (which wasn't real reassuring!) to the more specific, "I liked it when you talked about the Constitution." Dr. Paul was encouraged by that because it meant that a new generation would keep alive the values of "the remnant" and continue the freedom fight. Young people believe that Social Security will not be there for them because they understand how the system works, which was why "End the Fed!" was the most oft-heard chant at his rallies.

Being a Fed gadfly, it was not surprising that Dr. Paul spent some time discussing the recent financial crisis and bailout. He found no satisfaction in seeing many of his forecasts coming true, but it has allowed him to get more face time on television news shows. Pundits challenged his opposition to the bailout with statements such as, "Surely you can't believe that we should do nothing." Dr. Paul's response was that the federal government should return to sound money and lower taxes, and take more care in regulating the regulators. He pointed out that we got into this mess because of too much government spending, too much debt, too much inflation, and too much regulation. Now we are being told that the solution is more of the same!

Dr. Paul recalled the hugely successful Rally for the Republic in Minneapolis and the JBS presence there, with President John McManus as one of the featured speakers. He also complimented the JBS on the big turnout at their annivesary celebration, pointedly mentioning that several extra rooms had been set up to accommodate the overflow crowd. He exhorted the audience to "continue what you have been doing," and concluded with, "I come with a positive message and congratulations to you for all you have done. Congratulations and thank you very much for having me tonight."