McCain and Pinochet: Palling Around with Dictators 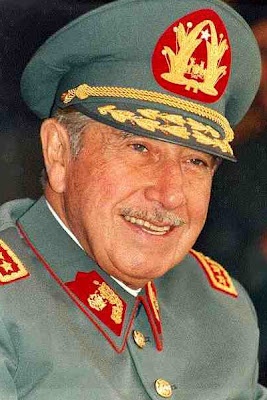 John McCain, who has harshly criticized the idea of sitting down with dictators without pre-conditions, appears to have done just that. In 1985, McCain traveled to Chile for a friendly meeting with Chile's military ruler, General Augusto Pinochet, one of the world's most notorious violators of human rights credited with killing more than 3,000 civilians and jailing tens of thousands of others.

The private meeting between McCain and dictator Pinochet has gone previously un-reported anywhere.

According to a declassified U.S. Embassy cable, McCain described the meeting with Pinochet "as friendly and at times warm, but noted that Pinochet does seem obsessed with the threat of communism." McCain, a member of the House Foreign Affairs Committee at the time, made no public or private statements critical of the dictatorship, nor did he meet with members of the democratic opposition in Chile, as far as could be determined from a thorough check of U.S. and Chilean newspaper records and interviews with top opposition leaders.

At the time of the meeting, in the late afternoon of December 30, the U.S. Justice Department was seeking the extradition of two close Pinochet associates for an act of terrorism in Washington DC, the 1976 assassination of former ambassador to the U.S. and former Foreign Minister Orlando Letelier. The car bombing on Sheridan Circle in the U.S. capital was widely described at the time as the most egregious act of international terrorism perpetrated on U.S. soil by a foreign power.

At the time of McCain's meeting with Pinochet, Chile's democratic opposition was desperately seeking support from democratic leaders around the world in an attempt to pressure Pinochet to allow a return to democracy and force a peaceful end to the dictatorship, already in its 12th year. Other U.S. congressional leaders who visited Chile made public statements against the dictatorship and in support of a return to democracy, at times becoming the target of violent pro-Pinochet demonstrations.

Senator Edward Kennedy arrived only 12 days after McCain in a highly public show of support for democracy. Demonstrators pelted his entourage with eggs and blocked the road from the airport, so that the Senator had to be transported by helicopter to the city, where he met with Catholic church and human rights leaders and large groups of opposition activists.

Mark Schneider, a foreign policy aide and former State Department human rights official who organized Kennedy's trip, said he had no idea McCain had been there only days before. "It would be very surprising and disappointing if Senator McCain went to Chile to meet with a dictator and did not forcefully demand a return to democracy and then to publicly call for a return to democracy," Schneider said.

McCain's visit with Pinochet took place at a moment when the Chilean strongman held virtually unrestricted dictatorial power and those involved in public, democratic opposition were exposed to great risk.

McCain's presence in Chile was apparently kept as quiet as possible. He and his wife Cindy arrived December 27 and traveled immediately to the scenic Puyehue area of southern Chile to spend several days as the guest of a prominent Pinochet backer, Marco Cariola, who later was elected senator for the conservative UDI party.

The trip was arranged by Chile's ambassador to the United States, Hernan Felipe Errazuriz. According to a contemporary government document obtained from Chile, Errazuriz arranged for a special government liaison to help McCain while in Chile for the "strictly private" visit, and described him as "one of the conservative congressmen who is closest to our embassy."

Errazuriz also arranged the invitation for the McCains to stay at the farm of his wealthy friend, Marco Cariola, according to Cariola, who did not know McCain previously. The McCains spent the three and a half days fishing for salmon and trout and riding horses. The area is one of Chile's most beautiful tourist attractions, with dozens of crystal clear lakes and rivers surrounded by luxurious estates such as the Cariola farm where the McCains were staying.

On December 30, McCain traveled back to Santiago for a 5 pm meeting with dictator Pinochet, followed by a meeting with Admiral Jose Toribio Merino, a member of the country's ruling military junta.

McCain's meeting with Pinochet in 1985 are described in a U.S. embassy cable, based on McCain's debriefing with embassy officials:

"Most of his 30-minute meeting with the president, at which foreign minister [Jaime] Del Valle and a ministry staff member were present, was spent in discussing the dangers of communism, a subject about which the president seems obsessed. The President described Chile's recent history in the fight against communism and displayed considerable pride in the fact that the communist menace had been defeated in Chile. The President stressed that Chile had stood alone in this battle, and complained that United States Foreign Policy had left them stranded. The congressman added that talking to Pinochet was somewhat similar to talking with the head of the John Birch Society."

Other than to describe the warmth of the encounter, the cable does not contain any account of what McCain said to Pinochet. There is no indication that the subject of human rights or return to democracy was raised with Pinochet. At this time in history, Pinochet was overtly ostracized by most world democratic leaders because of his refusal to move toward a restoration of democratic, civilian rule.

From his meeting with junta member Merino, however, McCain passed on an tidbit of political intelligence that the embassy found useful. "The most interesting part of the conversation, according to the congressman, was Merino's statement that he and other members of the Junta had recently told Pinochet that he should not expect any support from the junta if he should decide to be a candidate for president in 1989."

In fact, three years later Pinochet was defeated in a plebiscite in which he was the only candidate, and free elections a year later restored democratic government. A healthy list of U.S. congressmen traveled to Chile in support of the transition to democracy, including Republican Senator Richard Lugar. McCain, by then a first term senator, did not return to Chile.

In addition to the Chilean document and the U.S. cable cited above, at least four other declassified documents refer to McCain's meeting with Pinochet and his interest in Chile.

McCain campaign press office said no one was available to comment on the story.

Former ambassador Errazuriz, reached by phone, said repeatedly "it is not true" that McCain met with Pinochet, that he would have known about it if it had, and that the state Department cable was possibly a fabrication.

On September 11, 1973, Army General Pinochet led a bloody coup that overthrew the democratically elected government of President Salvador Allende. The four-man military junta that seized power bombed the presidential palace, padlocked the congress, outlawed all political activity and actively persecuted its opponents. Pinochet remained in power until 1990 and in 2006 he was charged with 36 counts of kidnapping, 23 counts of torture and one count of murder. He was spared a trial for health reasons and died at age 91 in December 2006.

John Dinges is the author of Assassination on Embassy Row (with Saul Landau) and The Condor Years: How Pinochet and His Allies Brought Terrorism to Three Continents.