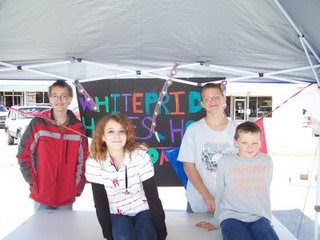 The 22nd annual White Christian Heritage Festival was another great success with friend coming from many different states. We had many visitors at the festival. Local towns people along with tourists stooped by our many booths, bought a hot dog or a piece of pie from the refreshment stand or just sat a listened to Heritage Connection sing songs from their CD's. 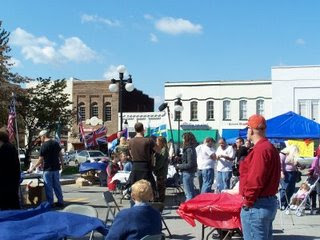 Folks getting ready for the Walk for White Pride

Aryan Warrior continues to be the most requested.

We had a great Walk for White Pride after which I spoke to the assembled crowd. In the evening a few of our friend met for a small gathering at a local conference room and further enjoyed fellowship. Rachel Pendergraft gave an inspiring message based on the concept of Mud and Guts which examined the dedication of the American Revolutionary War soldier and how God brought the victory when all else seemed hopeless. Heritage Connection a few more songs and then I spoke on a subject titled Due Season and how all things are planned and fulfilled in due season included the eventual victory of our people. ...