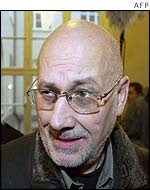 POTSDAM, Germany (AP) — A founder member of a left-wing terrorist group turned neo-Nazi went on trial in Germany Wednesday accused of publishing documents on the Internet denying the Holocaust.

Horst Mahler, a founding member of the Red Army Faction in 1970, is accused of regularly posting documents online between 2001 and 2004. ...

He was also convicted in the mid-1970s for RAF related activities — including several bank robberies and for helping notorious terrorist Andreas Baader, another founding member of the group, to escape from jail.

He was sentenced to 14 years in prison but was released in 1980 after he made several public statements condemning terrorism and Red Army Faction methods. Mahler then joined the far-right National Democratic Party, from 2000 to 2003, and acted as its attorney. The Potsdam trial is expected to last until at least mid-November. ...