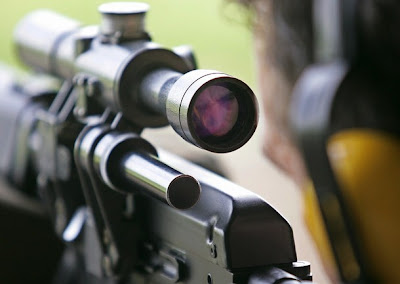 Piece by piece, judicial investigators have spent seven years assembling a searing accusation that penetrates the shadows of a dirty global trade.

Kalashnikov rifles and Soviet-made land mines poured by the planeful into Angola as it fought a civil war. In exchange, Angolan oil flowed to multinational companies. And a pair of savvy negotiators allegedly reaped millions of undeclared dollars in profits.

Their stacks of cash were then doled out to French and Angolan officials given secret code names, in exchange for political and commercial favors, according to the version laid out by French authorities.

On Monday, the case goes to trial in a Paris court.

Though the weapons sent to Angola weren't made in France, French arms vendors, like other major players in the world weapons market, have long been accused of similar machinations.

French President Nicolas Sarkozy has pledged to clean up the way his country peddles military materiel abroad, to better compete with the United States, the No. 1 seller. The trafficking trial demonstrates how hard it will be to regulate an industry that prefers to operate out of sight.

Prosecutors allege that corruption in the Angolan arms trading case went to the pinnacle of power in France, starting with a nod from the son of then-President Francois Mitterrand, and growing into a tangle of laundered money and parallel diplomacy that left a stain on France's relations with Africa and on the country's reputation in the global arms market.

Jean-Christophe Mitterrand and 41 other defendants feature in the climax of what the French dub "Angolagate."

Investigators got wind of wrongdoing after an apartment break-in not far from Paris' Arc de Triomphe in 1997, according to the indictment viewed by The Associated Press.

Three years of digging later, it says, they traced the apartment's ownership back to two men who have taken center stage in this legal drama: Arkady Gaydamak and Pierre Falcone.

Soviet emigre Gaydamak, 56, is an Israeli billionaire who is eyeing the Jerusalem mayor's post and owns Israel's Beitar soccer team. He is named in international arrest warrants issued by France, but Israel historically has not extradited its citizens, so France has not sought his extradition.

Falcone, 54, is an Algerian-born French businessman with oil industry ties. He now serves as Angola's representative to UNESCO, the United Nations' cultural agency, a post that provides him limited diplomatic immunity. He faces many legal cases in France, and spent 11 months in detention during the trafficking probe.

Their names pepper the indictment. Both are accused of illegal weapons sales, influence trafficking, tax evasion, corrupt practices and misuse of company funds, and face up to 10 years in prison if convicted.

Through their attorneys, both deny wrongdoing. Falcone's lawyers are seeking dismissal of the arms trafficking charges, and perhaps the whole case.

In July these lawyers produced a letter from Defense Minister Herve Morin saying there was no reason to prosecute the case in Paris because the weapons never crossed French territory.

Gaydamak built up a translation service in France in the 1980s and then, as the Soviet empire imploded, used his knowledge of it to capitalize on oil wealth and huge arsenals thrown open to world markets, often at cut-rate prices.

"Our family is very proud of Arkady Gaydamak. All those who know him know that he has every reason to be proud of what he has done, what he has done for France," his wife, Irina Tsirulnikova, told the AP by telephone from her Paris apartment. She would not comment on the charges against him, nor would his office in Jerusalem.

The indictment says French and Russian intelligence services had suspected illegal activity by Falcone and Gaydamak as far back as 1996.

Angola in the early 1990s was among the world's poorest, sickest and hungriest places, ravaged by a civil war that erupted in 1979 and became a Cold War proxy conflict between the Marxist government of Jose Eduardo Dos Santos, aided by Cuban soldiers, and the UNITA rebels of U.S.- and South Africa-backed Jonas Savimbi.

Dos Santos was looking for weapons to hold back UNITA's territorial gains. But France and others shied away from selling arms to a country at war. Dos Santos had no money, but he had oil.

French investigators say Gaydamak hooked up with Falcone, and the two enlisted Jean-Christophe Mitterrand to put them in touch with the Angolan leader. Mitterrand had served as Africa adviser to his father, then the president of France.

Via a Slovak company called ZTS-OSOS that they controlled, Gaydamak and Falcone arranged for military goods to be dispatched, mostly from Russian arms depots, to Angola starting in 1993, according to the indictment.

Dos Santos regained the offensive in city-by-city battles in a country nearly twice the size of Texas. Survivors in the city of Kuito recall 1992-93 as "the time we ate our dogs," and a decade later still had no electricity or running water. Land mines rendered swaths of the fertile country uninhabitable.

Investigators say arms supplies from ZTS-OSOS continued through 2000, for a total worth $791 million.

Mitterrand, 61, says he is "totally innocent," that he was merely consulting a French business interested in Angola, using contacts built during his years as Africa adviser. "I never discussed arms with Mr. Falcone," he said on France-Info radio this week. "The case rests on nothing."

But the case is not just about weapons sales.

Other defendants include politicians of the left and right as well as Charles Pasqua, France's one-time top cop; Chinese opera singer Alexandre Jia; Jean-Noel Tassez, a tycoon with a huge Monte Carlo casino debt; and Paul-Loup Sulitzer, a novelist who specializes in tales of espionage and organized crime.

According to the indictment, Falcone told investigators the money was spent to "facilitate things, not to buy people."

In depositions cited in the indictment, other secretaries described greeting influential visitors to Brenco's tony Paris offices while Delubac went into the basement to fetch envelopes of cash.

When the probe began under the presidency of conservative Jacques Chirac, who had succeeded the Socialist Mitterrand, many thought the case would never get to trial. Prosecutors annulled part of the probe in 2001 for procedural reasons, but later reopened it.

Sarkozy won election last year in part by pledging to rip up traditions of the past, including those dictating French relations with Africa and the arms sector.