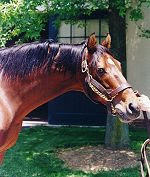 Lane’s End in Versailles, Kentucky, pensioned champion sprinter and prominent sire Gulch on Thursday. The announcement was coupled with the release of Lane's End's stud fees for the 2010 season.

“We are also announcing the retirement of our great international sire Gulch due to declining fertility,” Lane's End owner Will Farish said.

Out of multiple Grade 1 winner Jameela, by Rambunctious, Gulch has sired 596 winners from 881 starters that have earned $80,729,530 through Wednesday.