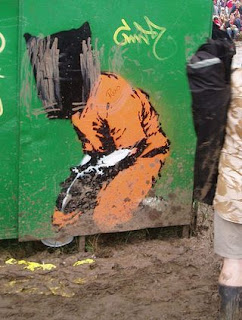 Atlantic Blog's Andrew Sullivan on "terrorists" captured by the CIA's cut-outs in Pakistan: " ... Cheney and Rumsfeld simply 'knew' these people - mostly shifty types handed over by bounty hunters or seized in Pakistan - were the worst of the worst. They didn't need any proof. They were never going to put them on trial. Their use for Cheney was as a demonstration project for what America could do to bad guys with funny names and long beards. And once they had been seized and described as the 'worst of the worst,' Cheney could not admit he had seized dozens of innocent human beings. So he doubled down on the lie. But you know it's a lie because he always acted as if it was. ... "
http://www.governmentalityblog.com/my_weblog/2009/09/andrew-sullivan-cheney-rumsfeld-gitmo-what-next.html
-------
Excerpt: CIA offers bounties to Pakistani intelligence: report
AFP

WASHINGTON — The CIA provides hundreds of millions of dollars to Pakistan's spy service, including payments for the capture or killing of wanted militants, a US newspaper reported, citing unnamed officials and former officials.

The CIA's financial support accounts for as much as one-third of the Inter-Services Intelligence (ISI) agency's budget, the Los Angeles Times reported on Sunday. ...

The clandestine program that offers bounties to the ISI for the capture or killing of militants has prompted fierce debate within the US government, officials told the paper, as ISI is suspected of retaining ties and providing support for Taliban and other Islamist extremists in Afghanistan.

The payments were first approved by former president George W. Bush and have continued under President Barack Obama, the report said. ...

In an indication of close ties to the Pakistani spy service, the CIA has regularly invited ISI agents to a secret training facility in North Carolina, it said.

Top US officials, including Admiral Mike Mullen, the chairman of the Joint Chiefs of Staff, openly voiced concern earlier this year about ISI's suspected ties with the Taliban.

Pakistan switched from top Taliban backer to US ally after the September 11, 2001 attacks. But the ISI has long faced allegations of insubordination to Pakistan's government and of channeling support to the Taliban as a counter to arch-enemy India, which has cultivated friendly relations with the Kabul government.

During the Cold War, the ISI worked with the CIA to arm Islamist groups that fought Soviet forces in Afghanistan. The ISI later backed the Taliban, which imposed austere Islamic rule on the war-torn country.

US media have previously reported that American officials had found evidence that ISI operatives provided money, military supplies and even strategic planning to Taliban commanders in Afghanistan.