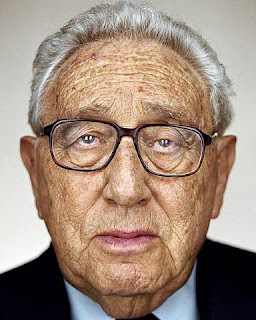 For all David Cameron's attempts to modernise his party, many Tories still hold a candle for the Reagan-Thatcher years. On 10 November, Henry Kissinger received the Margaret Thatcher Medal of Freedom from The Atlantic Bridge, a purportedly non-partisan charity founded by shadow defence secretary Liam Fox.

Dedicated to "the simple aim of strengthening the special relationship exemplified by the Reagan-Thatcher partnership of the 1980s", The Atlantic Bridge advisory board includes several members of the shadow cabinet, including George Osborne, William Hague, Chris Grayling and Michael Gove. The charity has helped Tories meet their US allies, and came to prominence this summer when its US members launched scathing attacks on the NHS. Other activities have included supporting the US launch of one of William Hague's books.

Baroness Thatcher, the charity's patron, endowed the medal and the annual lecture in her name to the Atlantic Bridge in 2007. The cheap seats at this year's event, at which Kissinger delivered a lecture, cost £400. Priority seating was available at an extra £350.

Yet the party may soon be over. Following allegations that it is not politically neutral, the organisation is being probed by the Charity Commission. One can only hope the Kissinger lecture boosted spirits. Things may be downhill from here.

http://www.newstatesman.com/uk-politics/2009/11/kissinger-thatcher-charity
------
RE THE ATLANTIC BRIDGE

... The Reagan-Thatcher partnership was a particularly dark time.

The pair famously sponsored the Taliban in Afghanistan; Saddam Hussein in Iraq as he embarked on genocide; Pinochet in Chile as he made thousands of people disappear; it defended the apartheid regime in South Africa (the only evil for which current Tory leader David Cameron has apologised).

Britain’s aid budget was used not to boost development, but to subsidise the arms trade and businesses who donated to the Conservative Party.

Nevertheless, generous observers may dismiss the Atlantic Bridge as a harmless relic from a bygone age.

But in 2003, the Atlantic Bridge registered as a charity, claiming to be a non-partisan education and research scheme or think tank. UK charities are forbidden from playing a role in party politics and last year the Charity Commission investigated the Smith Institute following allegations it had become too close to Labour.

The Commission asked if the charity’s work was of educational value or merit; balanced and not seeking to promote a particular point of view; and made sufficient work available to the public.

The Atlantic Bridge appears to fail on these requirements. It is hard to imagine any non-Conservatives signing on for a Reagan-Thatcher revival, all of its trustees are prominent Conservatives, it has published no research, and lectures like those delivered by Kissinger could hardly be described as publicly accessible.

When it registered as a charity, the Atlantic Bridge supplied a quite different set of objectives to the Charity Commission to those on its website. References to the Reagan-Thatcher partnership disappeared and it pledged to commit itself to public education and to research into relationship between Europe and America.

In August, I complained to the Charity Commission that the Atlantic Bridge was not a charity. An investigation was opened shortly after. The commission is notoriously slow, typically taking eighteen months to complete an investigation such as this. It’s usual response it to work with the charity involved to bring it into compliance with the law. This approach worked both with the Smith Institute and with the Reform and Policy Exchange think tanks, which had become too close to the Conservatives.