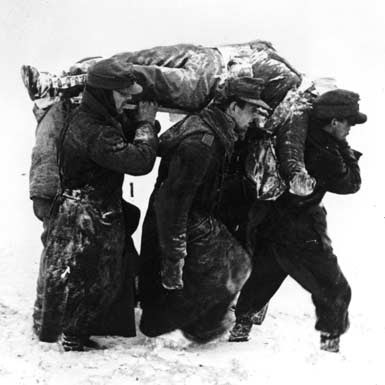 The Battle of the Bulge was protracted deliberately by the American military-corporate leadership to allow German military-corporate officials time to flee the Reich, via "ratlines," with their plundered wealth. The pointless delays attributed to General Eisenhower below were not due to inexplicable lapses in judgment that happened to extend the war - they were intentional. - AC

SIXTY-FIVE years ago, in November 1944, the war in Europe was at a stalemate. A resurgent Wehrmacht had halted the Allied armies along Germany’s borders after its headlong retreat across northern France following D-Day. From Holland to France, the front was static — yet thousands of Allied soldiers continued to die in futile battles to reach the Rhine River.

One Allied army, however, was still on the move. The Sixth Army Group reached the Rhine at Strasbourg, France, on Nov. 24, and its commander, Lt. Gen. Jacob L. Devers, looked across its muddy waters into Germany. His force, made up of the United States Seventh and French First Armies, 350,000 men, had landed Aug. 15 near Marseille — an invasion largely overlooked by history but regarded at the time as “the second D-Day” — and advanced through southern France to Strasbourg. No other Allied army had yet reached the Rhine, not even hard-charging George Patton’s.

Devers dispatched scouts over the river. “There’s nobody in those pillboxes over there,” a soldier reported. Defenses on the German side of the upper Rhine were unmanned and the enemy was unprepared for a cross-river attack, which could unhinge the Germans’ southern front and possibly lead to the collapse of the entire line from Holland to Switzerland.

The Sixth Army Group had assembled bridging equipment, amphibious trucks and assault boats. Seven crossing sites along the upper Rhine were evaluated and intelligence gathered. The Seventh Army could cross north of Strasbourg at Rastatt, Germany, advance north along the Rhine Valley to Karlsruhe, and swing west to come in behind the German First Army, which was blocking Patton’s Third Army in Lorraine. The enemy would face annihilation, and the Third and Seventh Armies could break loose and drive into Germany. The war might end quickly.

Devers never crossed. Gen. Dwight D. Eisenhower, the supreme commander, visited Devers’s headquarters that day and ordered him instead to stay on the Rhine’s west bank and attack enemy positions in northern Alsace. Devers was stunned. “We had a clean breakthrough,” he wrote in his diary. “By driving hard, I feel that we could have accomplished our mission.” Instead the war of attrition continued, giving the Germans a chance to counterattack three weeks later in what became known as the Battle of the Bulge, which cost 80,000 American dead and wounded.

Garrison Davidson, then Devers’s engineering officer and later a superintendent of West Point, believed Devers’s attack would have succeeded and pre-empted the Bulge, writing, “I have often wondered what might have happened had Ike had the audacity to take a calculated risk, as General Patton would have.” Patton wrote in his diary that he also believed Eisenhower had missed a great opportunity; the Seventh Army’s commander, Lt. Gen. Alexander Patch, felt the same way.

Why did Eisenhower refuse to allow Devers to cross? Eisenhower disliked Devers — a prim teetotaler who rubbed many gruff Army commanders the wrong way — and refused to include him among the generals fighting in northern France. Devers was appointed to lead the southern invasion by the Army chief of staff, George Marshall. Eisenhower would likely have fired Devers once the Sixth Army Group fell under his command in September 1944, but Devers had powerful patrons in Marshall and President Franklin D. Roosevelt.

Eisenhower was also a cautious, some would say indecisive, commander who favored a “broad front” strategy with all Allied armies moving in tandem on a solid front. His military objective was Germany’s main industrial area to the north, the Ruhr. Devers was operating too far south to help that effort.

True, the Germans knew the Ruhr was vital to them and fiercely defended it. But, as we know from several of their generals’ postwar memoirs, what they really feared was an incursion across the Rhine, which would have been a military catastrophe and a devastating symbolic blow to the German people.

The Rhine wasn’t crossed until March 1945. Had Eisenhower let Devers make his attack, we might now be celebrating the 65th anniversary of a cross-Rhine attack that quickly ended the war in Europe. Instead, we will soon mark the anniversary of the costliest battle in American history, the Battle of the Bulge.

David P. Colley is the author of “Decision at Strasbourg: Ike’s Strategic Mistake to Halt the Sixth Army Group at the Rhine in 1944.”