Rupert Murdoch is a 'Skinhead in a Brooks Brothers Suit' 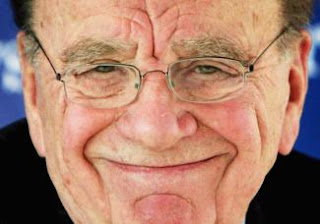 Rupert Murdoch of Australia, owner of Fox News Network and ever increasing media sources, is in my opinion, far more dangerous than all of the leaders of all the radical Islamic groups put together.

Most Americans are aware enough of these sects to know their agenda. However, there is an alarming number of uneducated, easily led Americans that actually believe the hate mongering propaganda flooding the airwaves such as the likes of Hannity, O'Reilly, Beck and rest of the Fox flock.

These unbalanced commentators and thier listeners either knowingly or unknowingly, if left unchecked, are turning the clock back to the days of the KKK. Only this time, the violence will be unleashed against Latinos and Muslims, as well as all people of color and sexual orientation. I'm old enough to remember the days of Adolph Hitler and his reign of terror, and I'm fearful that the "skinhead in Brooks Brothers suit," Rupert Murdoch has the same agenda. ...