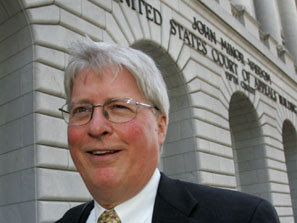 Apparently the shrinking “party of no” is purging its moderate members to such an extent, that the only Republicans left standing would be insane extremist teapartiers. In other words, the GOP will soon become, if it isn’t already, the sole Party of Sarah Palin, Rush Limbaugh, Glenn Beck and wacky right-wing Rep. Michele Bachmann (R-MN).

Ironically, Bopp’s purity test is named after Ronald Reagan. It’s called, the “Resolution on Reagan’s Unity Principle for Support of Candidates.” Since Reagan raised taxes, expanded the deficit and also bailed out Social Security, while he was in office, Bopp’s test would not allow the RNC to fund Reagan’s candidacy, if he were running today.

Bush also increased the federal deficit and supported amnesty for undocumented immigrants, so Bush would fail as well. Sen. McCain would also not fare too well under the right-wing loyalty oath, since he voted against the Defense of Marriage Act.

Bopp’s purity resolution also calls for candidates to join in “solidarity in opposition to Obama’s socialist agenda.” Bopp previously pushed a resolution to label President Obama and the Democrats as Socialists, which failed to garner enough support to pass.

GOP candidates would have to agree to at least seven of 10 conservative standards, if they expect to be financially supported by the RNC.

The full text of the loyalty oath can be found here.