Other stories in the news related to S. Korean fascist Sun Myung Moon and the lies of the Times: "Feuding sons, questionable finances threaten Unification Church", and "Media, Money and Sun Myung Moon" 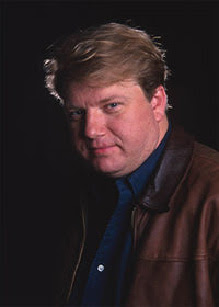 The former editorial page editor of the Washington Times has filed a discrimination complaint against the paper, saying he was "coerced" into attending a Unification Church religious ceremony that culminated in a mass wedding conducted by the church's leader, the Rev. Sun Myung Moon.

Richard Miniter, who was also vice president of opinion, made the claim in a filing Tuesday with the Equal Employment Opportunity Commission that also disclosed he was fired last month. He said in an interview that he "was made to feel there was no choice" but to attend the ceremony if he wanted to keep his job, and that executives "gave me examples of people whose careers at the Times had grown after they converted" to the Unification Church. A Times spokesman said the paper would not comment.

Miniter, an Episcopalian who tried to avoid attending by saying he had to worship at his own church, said he found the religious weekend in New York last December to be "creepy" and that the Times had invited him to other such events. He said that Moon spoke for about an hour, that ceremonies were conducted in which water was poured from small urns into larger ones, and that Moon married 20 to 30 couples.

The Times paid for his travel, Miniter said, and he and other company executives, including church member Thomas P. McDevitt, then the Times' president and publisher, stayed at the church-owned New Yorker Hotel.

The Times, owned by Unification Church officials, has said since its 1982 founding that it is editorially independent of the church; numerous editors and reporters have said over the years that they encountered no interference from the ownership. Still, Miniter's complaint raises a sensitive issue for the newspaper.

The conservative commentator said he was "stunned" by the turn of events because no one at the Times gave him an explanation when he stopped receiving pay and benefits in September. "Now I'm sad and angry," Miniter said. "It's the strangest thing. . . . It was a chance to reinvent the most boring opinion section of any major paper. I thought it was a way to bring the paper more to the center and do good journalism."

The Miniter filing follows a major shake-up at the Times. Three top executives, including McDevitt and chairman Dong Moon Joo, were ousted last week. Executive editor John Solomon, who like Miniter was hired by McDevitt, resigned and has offered no public explanation. The money-losing newspaper said it would assemble "a market-based plan that supports the sustainability of the Washington Times."

In the EEOC complaint, Miniter, 42, also charges the Times with discriminating against him on the basis of age and disability. He said Times executives expressed concern about the frequency of his medical appointments after a 10-day hospitalization for chest pains.

Miniter is a former Wall Street Journal editorial writer and author of such books as "Disinformation: 22 Media Myths That Undermine the War on Terror." He was hired as a Times consultant last October and tapped for the editorial page in March, and he remains on the masthead. Larry Klayman, Miniter's lawyer, said the Times is "trading off his name. . . . but he's not being paid."

Asked earlier this month about Miniter's lengthy absence, the Times issued a statement praising his "insights and innovation" and saying that the two sides "are discussing his compensation."

In May, the complaint says, Miniter refused to sign a "fraudulent statement" at the request of a Times vice president. As a result, the Times launched a "background investigation" and "questioned everyone who worked for me" but turned up nothing negative, the filing says. Miniter elaborated in an interview that the statement involved certifying his Arlington County address for a child of the vice president, who had moved to Maryland, so the child would be eligible to remain at an Arlington school.

The next month, Miniter alleges, the Times conducted a second investigation after he joked to his deputy about Moon's long, flowing garb in a church brochure. That probe was never concluded, Miniter said, and in July the company asked him to work from home. He said he was never given a reason for his termination.