" ... Arizonans in general are far too forgiving of neo-Nazis and white supremacy, and this apathy needs to end. This state is a hotbed of racist activism. ... Arizona needs to wake up. These people are not fucking around, and they are in our backyard. ... " 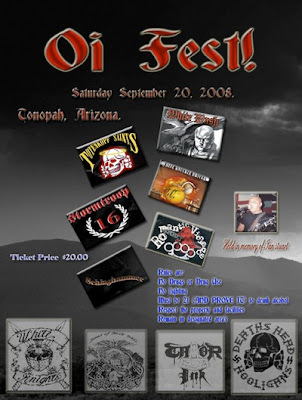 A flier for Tonopah's upcoming Oi Fest!, one of many neo-Nazi/white power events scheduled for Arizona.

As you might have read in the far right Sonoran Alliance blog this morning, three GOP Congressmen from Arizona -- Jeff Flake, John Shadegg and Trent Franks have called on Tom Husband, Chairman of the Maricopa County Republican Party to boot J.T. Ready from his post as a Republican precinct committeeman. Precinct committeemen are at the lowest rung of the party structure, and Ready, a Mesa neo-Nazi, has been a committeeman for several years now, but the letter from the three U.S. Representatives to Husband brooks no compromise.

"We are not familiar with the process by which elected Precinct Committeemen are removed from office," the missive states. "We’re not even sure our bylaws contemplate such a situation. If such a remedy is available, it should be immediately pursued. If it does not, we should, at a minimum, adopt a resolution asking for Mr. Ready’s immediate resignation.

"We simply cannot allow Mr. Ready to serve out his term, even if that term were to expire next week. We need to take action now and send a message that such behavior has no place in the Republican Party."

Ready himself was not impressed when I spoke with him this afternoon.

"Here's three Congressmen stumbling over their shoestrings," Ready said via phone, "who can get this letter together and do this thing to a precinct committeeman that lives in the Third World here, that's not even going to be in office in three weeks if he's moving? What is the point, you know what I mean? If I'm going to be the proverbial whipping boy, there must be a reason."

(Ready explained that because he'll be moving soon, he did not put his name in to run for pc again. Stay tuned for more of my interview with J.T., which I will post shortly.)

Maricopa County Elections Department confirmed that Ready is not a candidate for reelection to the post. Back in a 2007 Bird column, I first revealed that J.T. Ready had slipped in under the wire in the 2006 GOP primary to take the open, unpaid position. (Ready has since advised me that he's been a pc since 2002, which I've yet to verify.) GOP executive director Sean McCaffrey was unaware of Ready's position in his party when I informed him in 2007. Check this excerpt from what I wrote back then:

"A call to campaign finance director Kristi Passarelli at Maricopa County Elections confirmed Ready was telling the truth about his PC-ship. Passarelli informed this pelican that Ready was elected in 2006 from precinct 529, also known as Mesa 67. There were two slots open for Republicans, but Ready was the only one on the ballot in that primary. He received 36 votes.

"...Sean McCaffrey, executive director of the state GOP told the Taloned One the party was unaware of Ready's Republican position. He vowed Ready will be asked to step down. If Ready refuses, the party will field candidates for his PC-ship in '08, when Ready's term's up, to make sure Ready's not re-elected."

Needless to say, Ready did not step down. And there was no great hue and cry from the AZ GOP or the Maricopa County GOP demanding that some action be taken. In January of 2008, the Mesa white pride advocate once again bit Republicans in the ass, handing out anti-Semitic, racist literature at a County GOP function, as I revealed in a February blog post:

"Take the events of January 19 in Tempe," I wrote at the time, "where the Maricopa County Republican Party hosted its `mandatory meeting' and elected a new chairman, Tom Husband, who replaced outgoing county chairman Lyle Tuttle. At this MCRP assembly, Mesa neo-Nazi J.T. Ready distributed several racist and Holocaust-denying tracts, leaving copies on the seats of attendees for them to pick up."

The letter from the three Congressmen notes this incident as well. I'm not unaware of the politics behind this letter, as Jeff Flake is the brother-in-law of Kevin Gibbons, the Republican going head to head with erstwhile Ready-pal Russell Pearce in LD18. But so what? It's long since past time for the local Republican Party to take a stand, and if it takes a hard-fought Republican primary to do it, so be it.

Arizonans in general are far too forgiving of neo-Nazis and white supremacy, and this apathy needs to end. This state is a hotbed of racist activism, with almost an event a month geared toward neo-Nazi skinheads, white separatists and others. Recently, the local Nationalist Coalition, a descendant of William Pierce's neo-Nazi National Alliance, was instrumental in publicizing the June appearance of infamous Holocaust-denier David Irving at a Phoenix restaurant. Some 40 neo-Nazis paid $20 a head to hear Irving speak as part of his American book tour, though some later were pissed (if you read their accounts on the neo-Nazi site Stormfront.org) at having to cough up the green to hear Irving bloviate.

Also, Jesse Curnow, the Nationalist Coalition's Arizona coordinator, recently announced that the neo-Nazi org would be hosting "Stormfront Family Nights," with the first one to take place this Saturday, August 23rd.

Think they'll be making S'mores as they hang a black man in effigy? If so, my guess is that they lose the Hershey bars. The graham crackers, as well. Too, um, brown. Actually, might as well scrap the whole thing and just eat the marshmallows.

But white power family night ain't just for married folk. Singles can also go looking to hook up with an Aryan mate.

"White Nationalists who are not parents are also encouraged to attend," Curnow states. "And, as soon as possible, to meet a member of the opposite sex, and have at least 4 or 5 children."

Better hurry. According to the U.S. Census, whites will be a minority by 2042. Y'all ofays got a lot of catchin' up to do. But if you miss family night, the Nationalist Coalition regularly holds BBQs, and every year, they have a pagan, Xmas-type event called Winterfest.

If the Nationalist Coalition seems a little effete, keep in mind that the NC's father figure, the late William Pierce, was the author of The Turner Diaries , a racist dystopian novel that J.T. Ready once listed as one of his favorite reads. The novel also inspired The Order, the neo-Nazi group that killed Denver talk radio host Alan Berg in 1984. And most famously, it inspired Oklahoma City bomber Timothy McVeigh to commit the most heinous act of domestic terrorism in U.S. history.

There's rougher trade than the Nationalist Coalition to be found in the Valley skinhead scene. This September 20, The White Knights of America, the Deaths Head Hooligans, Thor Ink, and the Sons of Aesir Motorcycle Club will be putting on Oi Fest!, a white power music festival to be held in Tonopah. According to the flier, the event will feature bands such as White Wash, Stormtroop 16, White Knuckle Driver, Romantic Violence, and the Totenkopf Saints, whom you can watch a clip of at the 2005 NordicFest, here. Their lyrics read like the soundtrack for an all-American genocide:

Arizona needs to wake up. These people are not fucking around, and they are in our backyard. If it takes the Ready-Pearce controversy to make people pay attention to hate in our midst, so be it. We should be vigilant and mindful of what these groups and events represent, and do everything we can to oppose their creep into the mainstream here in Arizona. Moreover, the local Republican Party has a right and a duty to protect its legacy as the party of Abraham Lincoln, Dwight D. Eisenhower, and Barry Goldwater.