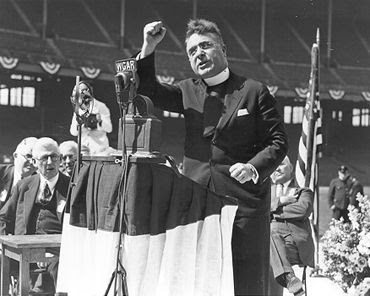 Father Coughlin, “the Father of Hate Radio,” was born in Hamilton, Ontario. This rabidly right-wing, Catholic priest started with a weekly broadcast on WJR, Detroit’s “Good Will” station. CBS broadcast it nationwide in 1930 and 1931. He started his own radio network that grew to 30 stations. John Spivak, estimated that Coughlin’s broadcasts reached 40 million, said: “Only the President…had a bigger audience… The President spoke only on special occasions, the priest every Sunday…. To me, he was the most dangerous divisive influence in the country” (A Man in His Time, 1967).

Coughlin originally supported FDR, but turned against him in 1934 and created a political party, the National Union of Social Justice. Former Louisiana Governor, Huey Long was supposed to be their candidate, but he was assassinated in 1935. Journalist George Seldes said Long was America’s “first notable Fascist leader,...a very smart demagogue, [who] once said, ‘Sure we’ll have Fascism here, but it will come as an anti-Fascism movement.’” In the late 1930s, Coughlin called for FDR’s impeachment because he was “leaning toward international socialism or sovietism.”

Coughlin’s radio sermons praised Adolf Hitler and Benito Mussolini. The Nazi press praised Coughlin as “America’s most powerful radio commentator.” He ranted against Jews, the “Christ-killers and Christ-rejecters.” When a Boston Globe reporter asked him for proof that communists were influencing FDR, Father Coughlin belted the journalist in the face.

Coughlin's weekly paper, Social Justice, reached one million. It was sold in 2,000 churches. In 1938, it reprinted the anti-Semitic forgery “Protocols of the Elders of Zion.”

While visiting the [FBI] in 1936, Butler told Hoover about a plot by Father Charles Coughlin to invade Mexico to protect the Catholic Church from harassment. Smedley said that Coughlin, the famous "radio priest" whose voice he recognized, had approached him by telephone and that the call was traced back to Coughlin afterward. It seems that Butler was being hoaxed. In any case, he was clearly wary of becoming involved in another publicized plot exposé. Butler mentioned the Coughlin plot again to an FBI agent in 1940 in connection with what he termed dozens of "screwball" organizations that had invited him to appear as a speaker.

Whether it really was Coughlin who phoned Butler about this bizarre plot to invade Mexico is unknown. However, we do know that Coughlin really was allied with the openly-Nazi German-American Bund. By 1939, Coughlin had inspired and was directing a nation-wide, fascist network, the Christian Front, which John Spivak described as “street-fighting toughs.” Roy Carlson, who infiltrated and exposed U.S. fascist groups said:

"Like Hitler’s Brownshirts, the Christian Front was ostensibly organized to combat the ‘rising tide of Communism.’ All Jews,... liberals, New Dealers and labor organizations were called Communist; and since the Communist Revolution in America was scheduled to take place ‘any day now,’ the Christian Front–always under Coughlin’s inspiration and guidance—shouted that a private army was the only means to ‘save America.’ Coughlin filled the pages of Social Justice with Hitler’s sewer-spawned lies. He made direct use of Goebbels’ speeches, quoting the Nazi almost word-for-word.... He denounced the ‘poppycock of Democracy’ and branded Democracy as a version of Communism” (Under Cover, 1943).

In Shrine of the Silver Dollar (1940), Spivak said Coughlin “cynically used the prestige of a priest and the heart-tug of Christian charity as a cloak for a fast deal.” Spivak showed that Coughlin was playing the stock market while denouncing this on air as “shooting craps with other people’s money.” Coughlin, secretly one of the America’s largest silver owners, urged his followers to lobby for silver as the money standard. Coughlin’s “monetary forms…are of great help to the Rockefeller interests, [Henry] Ford and [William Randolph] Hearst” (Spivak, New Masses, Feb.5, 1935).

Not long after Spivak’s exposé in 1940, Coughlin went off the air and his paper was denied use of the mails. That year, when an FBI raid found weapons in a Christian Front office, J. Edgar Hoover said the Front was planning to murder Jews, communists and “a dozen Congressmen.”

Although Coughlin was criticised by some high-ranking Catholics, he was never defrocked for hate-mongering, political campaigning or deceptive fundraising. Neither was he prosecuted. He continued to churn out virulent anti-communist pamphlets until his death in 1979.

Mickey Z., "The A Word"
http://www.pressaction.com

Source: Press for Conversion! magazine, Issue # 53, "Facing the Corporate Roots of American Fascism," March 2004. Published by the Coalition to Oppose the Arms Trade.

Order a Copy: Order a hard copy of this 54-page issue of Press for Conversion! on the fascist plot to overthrow President F.D.Roosevelt and the corporate leaders who planned and financed this failed coup.