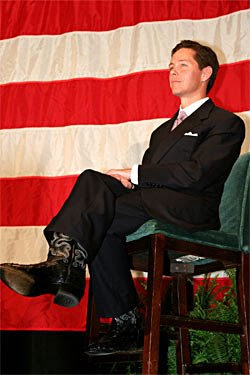 John McCain has often boasted that he led the way in the investigation that helped put Jack Abramoff in prison -- but apparently Abramoff's business associates are just fine for fundraisers.

The Atlanta Journal-Constitution reports that McCain is set to hold a fundraiser next week with none other than Ralph Reed, the Christian right leader and former Abrmaoff business partner whose 2006 bid for lieutenant governor of Georgia was derailed by the publication of numerous e-mails describing how Reed could launder money from Indian tribes to make it appear as if he wasn't actually working for pro-gambling interests.

"If you read this space, you knew this was coming," says Journal-Constitution columnist Jim Galloway. "But even now that the odd-couple alliance between Ralph Reed and John McCain is complete, you still can't believe that it's true."

Late Update: In all fairness, Barack Obama has previously raised money with Greenberg Traurig, a law/lobbying firm that was caught up in the Abramoff scandals.