Lessons Not Learned at the Bay of Pigs 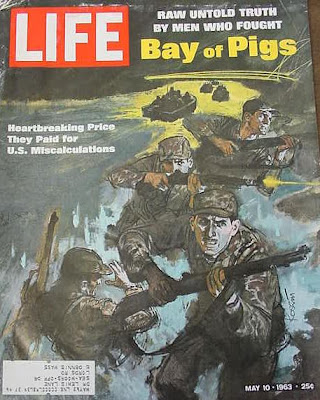 " ... The Bay of Pigs debacle provided ample warning of the dangers inherent in any interventionist foreign policy. ... "

Mr. Jones is the author of the just-published book, The Bay of Pigs (Oxford University Press).

On April 17, 1961, a small band of 1500 Cuban exiles invaded their former homeland at the Bay of Pigs in an attempt to overthrow Fidel Castro. Masterminded by the CIA, the operation hinged on covert action, a pre-emptive strike, and, its greatest novelty, an arrangement with the Mafia to assassinate Castro and set off a popular insurrection. The Kennedy administration had taken a new direction in foreign policy, one that rested on assassination and military force. Indeed, the assassination of Castro was just one part of an executive action program under development inside the CIA that aimed at regime change by simply eliminating troublesome state leaders.

The landing, as is well known, was a spectacular failure. Castro not only survived the invasion but outlasted ten presidents despite every effort to force him from office—including at least six attempts at assassination.

The question is, what lessons can be extracted from this fiasco of nearly half a century ago? The short answer is that “regime change” has remained a central part of American foreign policy, meaning that the White House failed to learn anything constructive at the Bay of Pigs.

We should start with the CIA. The agency had appeared invincible after its covert triumphs in Iran and Guatemala in the 1950s—which was why the Eisenhower administration authorized it to plan a covert program in Cuba that unexpectedly escalated from guerrilla tactics into an amphibious military operation. At this point, such a highly complex enterprise should have come under the purview of the Joint Chiefs of Staff, but the CIA jealously guarded its mandate, telling the Joint Chiefs that this was “not a military operation” and “You will not become involved in this.”

The CIA did not use common sense in partnering with the underworld. Its operatives have often recruited help from unsavory characters—but in this case, they went beyond the pale. “Assassination was intended to reinforce the plan,” insisted Richard Bissell, chief architect of the operation. Castro’s death would make the invasion “either unnecessary or much easier.” Castro had stripped the Mafia of its casinos and other businesses, leaving a thirst for vengeance that provided the CIA with a cover story for plausible deniability—the notion, first stated publicly by agency director Allen Dulles, that one can escape culpability for an act by instituting a loose chain of command that leaves no trail of evidence.

Plausible deniability, however, was an illusion. The CIA assured the White House that it could deny complicity in one of the most open secrets in the annals of secret history. From the beginning came warning signs. The CIA established a training camp in Guatemala for Cuban dissidents run by U.S. Army Special Forces—all known by the Latin public, American newspapers, Castro’s spies, and the Soviet news agency Tass. The invasion would take place on April 17, reported the Soviet embassy in Mexico City to Moscow earlier that month.

Nevertheless, it was an illusion that Kennedy clung to, particularly because political considerations began to take priority over military strategy. Concern about public exposure led him to reject the original plan for a dawn landing at Trinidad, an anti-Castro town of 18,000 inhabitants that offered potential for a popular uprising, several landing docks, geographical isolation from the regime’s forces, and close proximity to the Escambray Mountains, home of a thousand anti-Castro guerrillas and a base for future operations. Kennedy, however, opposed a Normandy-like invasion that exposed U.S. involvement and called for an alternate site allowing a quiet, night-time landing dependent on surprise—which undermined the chances of a popular uprising.

Bissell all too quickly found another landing spot—Zapata, whose focal point for the invasion was much closer to Havana—the Bay of Pigs. But the Zapata peninsula, known as the “Great Swamp of the Caribbean,” was sparsely populated, which virtually eliminated an insurrection, and it had no landing docks and was rimmed by shark-infested waters too deep for anchoring in some areas and ribbed with razor-edged coral reefs capable of ripping the bottoms of boats as well as the legs of men. Its beaches wrapped around a million miles of hot tropical wilderness that was overrun with tangled mangrove trees and shrubs, nearly impenetrable thickets, alligators and crocodiles, ferocious pigs, poisonous snakes, voracious insects, and millions of sharp-shelled, toxic red land crabs that in the spring of every year (the time of the invasion) scurried out of the jungle, carpeting the passageways and the beaches in their haste to breed in the sea. Furthermore, the landing site lay eighty miles from the Escambrays, no longer affording a sanctuary because of distance and the deadly swamp lying between. If Bissell was aware of these problems, he did not alert the president to them.

The strategists underestimated the enemy. The CIA and the Joint Chiefs assumed that Castro’s forces were lukewarmly loyal and too poorly trained to run the tanks, fight effectively, and pilot his small air force of B-26s, Sea Furies, and T-33 jet trainers. To assure success, the CIA planned two days of pre-invasion strikes by its own B-26s—D-2 and D-1 bombing and strafing that would disable Castro’s air and ground forces—followed by D-Day air cover. But Kennedy cut the number of planes in the initial D-2 strikes from sixteen to eight, and then canceled the D-1 operations. Finally, he called off the air cover for D-Day—all to hide the American hand and maintain plausible deniability.

Moreover, the Kennedy administration did not seriously consider the opposition’s arguments that even success, which was unlikely, would damage America’s international stature. The president dismissed the warnings of Ambassador to India and close confidant John Kenneth Galbraith, Senators J. William Fulbright and George Smathers, Undersecretary of State Chester Bowles, and former Secretary of State Dean Acheson. White House adviser and historian Arthur M. Schlesinger Jr. wrote extensive memos forecasting a public relations catastrophe that would undermine the good will and credibility amassed by the young president in his first months in office. Regardless of the outcome at the Bay of Pigs, the United States would stand as the imperial colossus from the north.

Instead, the White House relied on luck and ingenuity to smooth over the cracks in the plan. Kennedy ignored his own instincts in succumbing to his unusual attraction to guerrilla warfare and the James Bond mystique. Still clinging to the fig leaf of plausible deniability and trusting in the CIA and Pentagon experts as well as in his Midas touch, the president approved the plan. So confident were the planners in a last-minute resort to direct U.S. military action if necessary that they drew up no exit strategy in the event of failure.

In a three-day battle, everything that could go wrong for the Cuban brigade did.

Kennedy’s decision to change the landing site from Trinidad to Zapata, and to call off the D-1 and D-Day air strikes doomed the operation from the start. The first move eliminated any chance of a popular uprising; the second left the invasion force with no air cover. Not only did the sharply curtailed D-2 strikes warn Castro of an invasion, but the D-1 and D-day cancellations surrendered the skies to his planes and permitted the more expeditious arrival at the battle scene of his Russian tanks and thousands of militia.

Crucial to the outcome was the absence of a mass uprising. The CIA had not established a network of connections with the local populace; Castro had broken the back of any potential insurrection by clapping thousands of suspects into prison; the invasion had occurred in a place remote and isolated from populated areas; the guerrillas in the mountains were poorly armed and prepared; and the poison plot had failed when the potential assassin feared discovery and sought asylum in the Mexican embassy in Havana.

The most incisive appraisal of the invasion came from Castro, who attributed the brigade’s failure to lack of air cover. The rebel planes dropped their airborne battalions too close to the beaches, allowing his tanks and artillery to enter the three causeways leading to the battle sites. The landing spot was superb in military terms, but only if the invaders had closed the causeways and with air protection held the beachhead long enough to build a military and naval base, announce a provisional government, and seek recognition and outside aid. They had a “good plan, poorly executed.”

Kennedy’s nightmarish experience at the Bay of Pigs certainly helped him stand up to the Soviets in the ensuing Cuban missile crisis; yet one doubts that such a crisis would have occurred without the Bay of Pigs. It is questionable whether Soviet leader Nikita Khrushchev would have challenged him at Vienna to pull out of Berlin, but it is inconceivable that he would have risked placing missiles in Cuba had the young president thrown out an invasion plan pockmarked with flaws and aimed at a country posing no threat to U.S. security. Indeed, the Kennedys became so obsessed with Castro that during the missile crisis they spent valuable time planning his elimination out of vengeance for his welcoming the missiles.

But—and here is the critical point—both the president and his brother ignored the lessons left by the Bay of Pigs. Less than two weeks after the invasion and months before the missile crisis, the president gave contingent approval to an air- and marine-force assault on the Havana area followed by the landing of 60,000 American troops. While the Joint Chiefs worked out a detailed plan in the fall of 1961, Kennedy appointed CIA legend Edward Lansdale to head a top-secret program code-named Operation Mongoose which, with Robert Kennedy as its real leader, sought to eliminate Castro by any means necessary—including assassination. When Mongoose failed and White House attention turned to other trouble spots, the CIA tied the executive action plan to a revived collaboration with the Mafia. In the meantime, both before and after the missile crisis, the agency conspired with a potential assassin to eliminate Castro—Army Major Rolando Cubela, an associate of Castro who had become disenchanted with the political direction of the revolution. On the very day president Kennedy was assassinated in Dallas, Cubela (code-named Amlash) was meeting in Paris with a CIA operative, making plans for killing Castro either by sniper fire or in the course of a military coup.

President Kennedy soon afterward removed Bissell from his CIA post but praised his “enduring legacy.” Bissell had left a lasting mark on foreign policy—but not the type the president had in mind. In a statement that revealed an unintended double meaning if not a healthy dose of naiveté, Kennedy administration insider Richard Goodwin later noted that “Latin America was considered a kind of training ground for Southeast Asia.” Indeed, covert tactics aimed at regime change became the norm in Africa and the Middle East as well as in Latin America and Southeast Asia as Washington became enamored of what it could accomplish by clandestine and deniable means.

The Bay of Pigs debacle provided ample warning of the dangers inherent in any interventionist foreign policy. Yet the warning remains unheeded—as shown in Vietnam and Iraq.