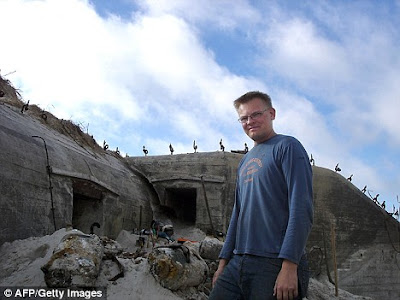 HOUVIG, Denmark (AFP) — With a tight grip on his flashlight, Tommy Cassoe looks like a Danish Indiana Jones as he crawls out of a bunker buried under the sand, one of 7,000 the Nazis built along Denmark's western shores to fend off an allied invasion.

"Mission accomplished. The bunker is empty," Cassoe exclaims, showing off his bounty on the Krylen beach to a crowd of onlookers: rusty cans, a plastic vial containing medicine in case of a mustard gas attack, and electrical cables.

This bunker and three others, entombed under the sand dunes of Houvig since 1945, were uncovered a few months ago in a violent storm, when giant waves swept away the sand, exposing glimpses of the cement and iron structures.

The discovery was "a sensation" for history buffs like Cassoe and archaeologists.

"What's so fantastic is that we found them completely furnished with beds, chairs, tables, communication systems and the personal effects of the soldiers who lived inside," says Jens Andersen, the curator of the Hanstholm museum that specialises in Nazi fortifications.

The Nazis built some 8,000 bunkers in Denmark, 7,000 of them on the western coast. They were "emptied by the Danes of their contents after World War II to salvage the scrap iron and electrical devices that were needed."

The discovery in May of the four fully-furnished bunkers, untouched after 63 years under the sand, is considered "unique in Europe," according to Bent Anthonisen, a Danish expert on European bunkers.

They were located by two nine-year-old boys after they spotted a bucket in front of the entrance to one of the bunkers.

Their discovery was reported by a local newspaper, drawing the attention of Cassoe, an electrician who has been fascinated by the existence of the thousands of bunkers since childhood.

He rushed immediately to the scene, and was the first to enter the still-furnished bunkers.

"It was like entering the heart of a pyramid with mummies all around. I dug a tunnel through the sand that was blocking the entrance to the bunkers and what I saw blew me away: it was as if the German soldiers had left only yesterday," he said.

Experts and archaeologists also hastened to the scene, and, working together with Cassoe, emptied the structures within a few days of boots, undergarments, socks, military stripes, mustard and aquavit bottles, books, inkpots, stamps featuring Hitler, medicines, soda bottles, keys, hammers and other objects.

"It was a race against the clock because of the risk of looters. We lied to keep them at bay, saying that there was only one furnished bunker and that it was guarded around the clock, which wasn't true. But even so there were two attempted break-ins," Anthonisen says.

Due to the intense media coverage, the long Krylen beach peppered with bunkers has become the big attraction this summer, drawing thousands of tourists from Denmark and neighbouring Germany for guided tours.

Anthonisen leads a group on a tour of one of the bunkers. Nine soldiers and their commander lived in the cramped, 20-square-meter (215-square-foot) space for five years.

"It was surprising to see the soldiers' living conditions in the bunkers," says Ute Eichorst, a German tourist surrounded by her children and grandchildren.

The bunkers have sparked strong reactions among tourists and the local media.

"In a way, this discovery can be compared to Tutankhamun's tomb almost a century ago. It has to be preserved, and to blow up the bunkers as some have suggested would be like denying that World War II ever existed," says Ole Becher, a Dane whose grandfather was part of the resistence and who was denounced to the Gestapo toward the end of the war.

Local resident Mogens Kock Hansen disagrees, writing in the local newspaper that "everything should be blown up". He's "disgusted that people want to attract tourists to this kind of garbage."

The head of the Ringkoebing-Skjern museum, Kim Clausen, said that while the find "was not from the bronze age, what has been found is incredibly authentic and tells us a lot about how they lived in these bunkers."

All of the objects from the shelters have been taken to the conservation centre at Oelgod museum, some 30 kilometres (20 miles) from the beach, to be examined.

The centre's German curator Gert Nebrich judged the find "very interesting because it is so rare."

"We don't expect contemporary objects like these to be so well preserved. Maybe it's because they were kept for 60 years in the cold and dark like in a big vacuum," he says, carefully showing four stamps featuring Hitler's image and the German eagle.

They were used by soldiers to "send Christmas presents to their families in 1944," which consisted mostly of packets of Danish butter, Anthonisen says.

"World War II and its memories will not just go away. And discoveries like these breathe new life into the story and the fascination that still surrounds this war," the local newspaper, Dagbladet Ringkoebing-Skjern, wrote in an editorial recently.

That is why the bunkers need to be preserved, it said, adding: "They are part of our common European history."