" ... US authorities are playing down the ability of the arrested men to carry out an assassination. ... The evidence suggests a well-planned assassination attempt, with weapons assembled, a truck rented and hotel rooms booked in a town where most accommodation was full months before the convention. ... " 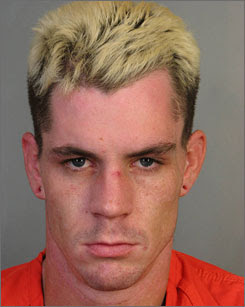 Tharin Gartrell was arrested Sunday in Aurora, Colo., on drug and weapons charges.

THE three men arrested over a reported plot to kill the US Democratic presidential candidate, Barack Obama, have ties to the white supremacist group Aryan Nations, police said last night.

Shawn Robert Adolf, 33, Nathan Johnson and Tharin Gartrell are all said to have links to the group.

Adolf – his real name according to police – and the others were arrested on weapons charges after an apparent move to assassinate Mr Obama during his party's convention in Denver this week.

All three belong to Aryan Nations, according to Victor Ross, the police chief in Glendale, a suburb of Denver where one of the suspects was arrested. The other two were held in Aurora, another suburb.

"We don't usually have that number of Aryan Nations people here,'' Mr Ross said. "It was suspicious to us. We turned everything over to the federal authorities."

It is said the group planned to shoot Mr Obama during his convention acceptance speech, to be delivered outdoors at a football stadium tomorrow night – the anniversary of Martin Luther King's famous "I have a dream" address. While federal agents are downplaying the plot as being of "no credible threat" to Mr Obama, the discovery of such a plan – and the way it was discovered – are certain to raise security concerns over the man who could be the next president of the United States.

Events started to move in the early hours of Sunday, the day before the Democratic National Convention was due to open, when a police patrol car stopped a pick-up truck driving erratically in Aurora.

In the back of the vehicle, officers found two high-powered rifles, one with telescopic sights, a spotting scope, a flak jacket, camouflage clothing, a bulletproof vest, boxes of ammunition, three fake identity cards, two wigs, two walkie-talkies and a quantity of the drug methamphetamine, a form of speed known as crystal meth.

The driver, Gartrell, 28, unemployed, was arrested.

Four hours later, police raided a nearby hotel where alleged accomplice Adolf, a wanted fugitive, was staying. He tried to escape by jumping from a sixth-floor window, breaking his ankle in the attempt.

He has a long history of convictions for drugs and violence, and when arrested, police found he had the key to handcuffs in one hand and a ring with a swastika emblem in the other.

Shortly afterwards, police made two more arrests, of Johnson, 32, and his girlfriend, Natasha Gromek, both on drugs charges, at another hotel. In an extraordinary interview from his jail cell, Johnson told a reporter from CBS television that Adolf had planned to kill Mr Obama during his nomination acceptance address to 75,000 supporters at Denver's Invesco Field at Mile High football stadium tomorrow night.

"He (Adolf] said at one point, yes, it would be on probably the day of his acceptance speech," Johnson said. He had told FBI investigators "it would be from a high vantage point with the named rifle". But Johnson insisted he himself had no part in the plot.

Aryan Nations is the most influential of dozens of neo-Nazi groups spread across the US. Last year, one of its members, Jason Hamilton, went on a shooting spree that left three people and himself dead in Idaho, home to one of the group's three branches. Hamilton was a member of The Order, a self-styled commando group within Aryan Nations.

The group's website is blunt about its role in creating a whites-only state in North America. "We realise that it takes a cold-blooded, pragmatic and realist viewpoint to enact the changes which will be necessary to achieve our goals," it says.

But the US authorities are playing down the ability of the arrested men to carry out an assassination amid tight security. "We're absolutely confident there is no credible threat to the candidate, the Democratic National Convention or the people of Colorado," Troy Eid, the state attorney, said.

Opinion is divided about whether groups such as Aryan Nations represent a genuine threat or can be dismissed as cranks, but the US has a long and unhappy history of cranks with guns. The 1963 assassination of John F Kennedy was the work of a disgruntled loner, Lee Harvey Oswald, and in 1995, Timothy McVeigh, a former soldier, aided by two accomplices, built a bomb and detonated it outside a federal building in Oklahoma City, killing 168.

Prosecutors yesterday said they had evidence to charge the three men only with drugs and firearms offences.

Security fears have been heightened by Mr Obama's decision to hold his acceptance speech not in the convention centre in Denver, but in the open-roofed football stadium, a much harder venue to police.

The evidence suggests a well-planned assassination attempt, with weapons assembled, a truck rented and hotel rooms booked in a town where most accommodation was full months before the convention.

But police sources doubt such an attempt could have been carried out. Metal detectors will search all those entering the stadium; the nearest rooftops are 750 yards from the ground and will be monitored by police snipers; helicopters will guard a no-fly zone over the stadium, and even a McVeigh-style truck bomb would be kept away by a large cordon around the area.

Nevertheless, the arrests have touched a raw nerve .

Thursday's nomination acceptance takes place on the anniversary of the "I have a dream" speech by Martin Luther King, and King's campaign for racial equality saw him assassinated 40 years ago.

And while Democrats of all races are euphoric about the Obama campaign, that is countered by some resentment.

As a result, security is tight, verging on paranoid, across the city. On Sunday, a full security alert was triggered and a hotel evacuated – those that had to leave included House speaker Nancy Pelosi – after a man checked-in with two hunting rifles he had brought to Denver for repair.

On the main highway leading to the airport, police patrols have begun stopping vans and minibuses, apparently after fears about home-made bombs.

Meanwhile, a large part of downtown Denver has been closed off, with high metal gates and concrete barriers to thwart bombing attempts. Inside this zone, police vehicles cruise the streets with armed officers in black jumpsuits clinging to the sides.

Since Sunday, Denver police have been hunting through derelict and public buildings for weapons, flags and petrol bombs that they fear rioters may have stockpiled, intending to use during demonstrations planned for later this week.

The media are also under pressure from the Democratic establishment, which wants reporting to concentrate on their scripted conference and not be diverted into covering an alleged assassination conspiracy.

A target of hatred from the outset

THE men and women of the Secret Service, dressed in dark suits, wearing sunglasses and carrying SIG Sauer P229 automatic handguns, arrived at Senator Barack Obama's side at exactly 1pm on 3 May, 2007. And they don't look likely to leave anytime soon.

Mr Obama was given official protection under Public Law 90-331, introduced after the assassination of Robert F Kennedy, which authorises the protection of major presidential and vice-presidential candidates.

Usually the armed protection begins 120 days prior to the election, however, Mr Obama was given early and elevated security because, as Dick Durbin, a Democratic senator, explained: "Mr Obama's African-American heritage is a cause for very violent and hated reactions among some people."

While Senator John McCain, the Republican nominee-in-waiting, is understood to have just eight full-time Secret Service agents in his detail, Mr Obama is thought to have dozens more. All are trained in the use of a variety of close-combat weapons, such as the Remington Model 870 shotgun, the IMI Uzi and the HK MP5 (including the MP5KA4) submachine-guns among others. Each is issued with a radio to maintain communication with a central command post and other personnel. Basic strategies include: shield the protectee from any threat; evacuate the protectee to a safe location; conduct extensive research in order to plan for all contingencies.

Protection goes beyond surrounding the candidate with well-armed agents. The Secret Service website states that the agency does extensive advance work and threat assessments.

It has been reported that the Secret Service's codename for Mr Obama is "Renegade". The Senator has a relaxed, good-natured relationship with the men charged with taking a bullet for him.

While Mr Obama's team insist the candidate has "the best protection in the world", there have been allegations that the vast numbers flocking to hear the senator speak are forcing the Secret Service to cut corners. It was reported that, at a rally in Dallas, agents ordered local police to stop searching each supporter before entering the arena.