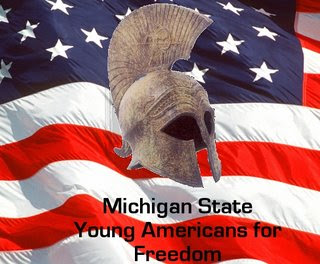 By TODD A. HEYWOOD
8/12/08
www.michiganmessenger.com

Members of the Michigan State University chapter of Young Americans for Freedom (YAF) have gotten a ton of publicity over the last two years for racist and homophobic antics on campus, earning the YAF a listing as a “hate group” by the Southern Poverty Law Center (SPLC) and as an “extremist group” by the Anti-Defamation League (ADL).

Kyle Bristow, the former chair of MSU-YAF, ran for and achieved the post of precinct delegate of the 29th district in southeast Michigan’s Clinton Township.

This is not Bristow’s first time in an elective position. He served a short term as representative to Associated Students of Michigan State University (ASMSU), the student governing body of MSU. He was recalled from that post, representing the James Madison College after students learned of his plans to eliminate all minority groups, create a white council and “hunt down illegal immigrants in the Lansing area.” In April, Bristow was involved in bringing Canadian Nazi Paul Fromm to Lansing.

Tyler Whitney, a 20-year-old MSU student with links to the 2007-2008 presidential campaign of anti-immigration and anti-gay Colorado Congressman Tom Tancredo, as well as to the YAF MSU chapter, made a quiet, unnoticed bid for a slot as a Republican trustee for Bath Township in Clinton county north of Lansing.

He came in fourth in Tuesday’s primary in a five-way race, but what’s more interesting is how he presented himself to voters. That is, his time as the webmaster for Tom Tancredo for President as well as his participating in an anti-gay protest in Lansing with MSU YAF did not make it into either his campaign literature or any media coverage of the would-be trustee.

Nor did his time working with the Michigan Taxpayers Alliance to recall Republican State Rep. Richard Ball. The 2008 effort sponsored by the Howie Rich and Grover Norquist-funded Americans for Tax Reform was labeled a blackmail effort by the far right-wing, free-market extremists attempting to punish moderate Republicans who voted for tax increases.

Instead, Whitney, who trained at the Leadership Institute in Virginia — which trains conservative youth activists from across the country — ran a campaign with platforms that included encouraging new businesses and saving green space. No mention of his attendance at Nick Griffin’s speech about the British National Party at MSU. Griffin and his party are openly racist, running a platform to prevent all non-whites from immigrating to England. During the appearance at MSU, Griffin made claims that parts of the Holocaust were fabricated by the Allied powers. He claimed the chimneys at Auschwitz were added by the Allied troops who liberated the infamous death camp.

If Whitney were elected a trustee, he would be in charge of such decisions as zoning changes, ordinances and other related local government issues for the small township.

Whitney’s attempt at running for office follows that of Dennis Lennox III. Lennox was the chair of YAF’s chapter at Central Michigan University (CMU) back in April of 2007 when CMU’s student government considered ousting the group by labeling them as a hate group. The student government-led move was in response to an anti-gay graffiti incident on campus, combined with the close ties the CMU YAF chapter had with MSU’s more infamous YAF chapter. Lennox threw his hat in the ring to run as a Republican for the state House, but quickly backed out when the incumbent of the 105th, Kevin Elsenheimer, announced he planned to seek re-election.

Lennox is known nationally as the controversial student who followed Gary Peters, who is running for the 9th Congressional District as a Democrat, around CMU with a video camera. Lennox was on Peters for taking a position at the university and running for office. Lennox was recently punished by the school for passing out literature against Gary Peters in violation of university rules.

Lennox has since started a new group at CMU called The Conservatives that is funded in part by the aforementioned Leadership Institute.