Incompetent or Cursed: Minot Air Force Base in the News Again! 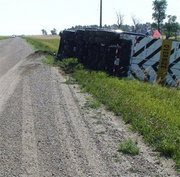 After this most recent incident of a overturned truck carrying an Intercontinental Ballistic Missile (ICBM) booster, one thing is certain: North Dakota’s Minot Air Force Base is in the news again.

Since June, the Peace Garden State, with some of the United States' largest nuclear weapons arsenals, has provided headlines that have put North Dakota in the limelight unfortunately by an Air Force fraught with systemic problems including the removal of their current leadership, aircraft mishaps, fraudulent multi-billion dollar contracts, and the continued mismanagement of their nuclear devices.

To add to the long list of Air Force calamities, this Thursday a truck carrying the booster for a Minuteman III missile overturned a few miles east of Parshall in northwest North Dakota. The Air Force said there was no danger to the public, since it was an unarmed booster rocket for an intercontinental ballistic missile.

The truck and booster rocket, which is 66 feet long and weighs 75,000 pounds, were still sitting along the road Saturday under armed guard.
"The scene is still in the assessment phase," said Maj. Laurie A. Arellano, an Air Force spokeswoman. "It's still on its side in the ditch."

According to the Associated Press, “the truck was traveling from Minot Air Force Base to a launch facility in northwestern North Dakota when it crashed on the gravel road Thursday morning between Parshall and Makoti, about 70 miles from the air base. Two airmen in the vehicle were not seriously injured.”

Folks in this area are used to missiles being transported, and they trust the Air Force. Residents of the small towns seem unfazed by an ICBM rocket booster lying in their ditch.

Darwin Quandt, a resident of Makoti said he wasn't worried. "As long as it ain't going off, we're OK," he said. "And if it did, it wouldn't matter anyway."