John McCain, The Most Dangerous Man in America 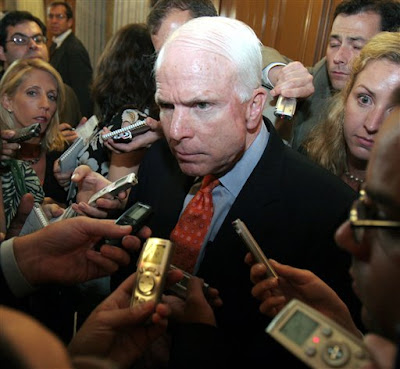 The first crisis over North Korea's nuclear program arose in late 1994. It was obvious there was not much the United States could do to step in unilaterally and disarm the North Korean regime. Sanctions, the normally inevitable option short of war, had no meaning – the United States had no trade with the North in the first place and the regime followed a policy of economic autarky (Juche) in any case. There was really only one feasible course of action: gather as many regional allies as possible, agree to a process of inducing North Korea to freeze its nuclear program, and tender an offer to the North Koreans on the basis of a quid pro quo.

When the Clinton administration outlined its proposed course of action to Congress there was some grumbling. Arm-waving professional patriots of the American political class do not like seeing the slightest diminution of their country's God-given prerogative to impose its will abroad when and as it likes. But there was no rational alternative, and apart from a few obscure, back-bench House Republican members a general consensus emerged that the administration's Agreed Framework was the best of a bad series of options.

Only one politician of any political standing dissented. His name was John Sidney McCain III. His modest proposal was that the United States should be prepared to bomb the North Korean reactor sites. Never mind that he could be condemning several thousand U.S. troops (and tens of thousands of South Korean civilians) in the vicinity of the Demilitarized Zone to a virtual death sentence. It had never occurred to this self-proclaimed military expert that the North Korean regime had amassed thousands of long-range artillery pieces and rocket launchers and concealed them in tunnels north of the DMZ. From these positions the North Korean military could unleash an avalanche of fire south of the border. The result would probably have been a repeat of the Korean war of 1950-53 but with even more murderously lethal weapons.

Fast forward to 1999 and the Clinton administration's great crusade in the Balkans (carefully calculated to target a weak and isolated country – Clinton was no fool). Humanitarian intervention was all the rage but it had to be designed to minimize the exposure of U.S. troops; after all, with no conceivable vital U.S. interest at stake, the public would not contemplate the spilling of American blood without an attendant drop in Clinton's all-important poll numbers.

Some politicians were actually able to set aside their reflexive jingoism and smell the scent of wag-the-dog in the sanctimonious statements of Bill Clinton, Madeleine Albright, and Richard Holbrooke. The vote on an authorization of the use of force against Serbia failed in the House on a tie vote of 215-215 — the only time the equivalent of a war declaration failed in either house in U.S. history.

In the other chamber John McCain was also critical of the administration's Balkan policy. Only for him, it wasn't bellicose enough. Rather than limiting it to a bombing campaign he introduced a joint resolution to authorize the introduction of ground troops into a full-scale war with Serbia, something the Clinton administration did not even ask for. Fortunately, in a rare show of good sense, the Senate tabled the McCain resolution by a vote of 78-22. 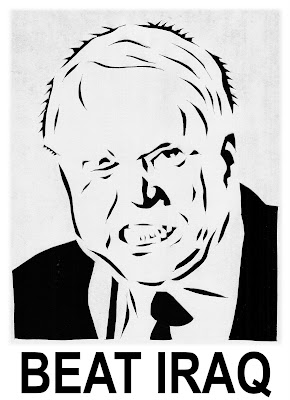 McCain's unbridled, almost manic, bellicosity with respect to the quagmire in Iraq is too well known to require elaboration. But the sophistication of his military strategy with respect to that country can be inferred from his remarks to a group of bikers in Sturgis, S.D.: "We'll win it the right way, and that's by winning it!"

Apparently, though, McCain's neoconservative handlers have already grown tired of the generational struggle against "Islamofascism" (not to mention their long-planned intention to bomb Iran), for they are already pivoting McCain into a stance of maximal belligerence against Russia.

Much has been made about McCain's relationship with his principal foreign policy handler, Randy Scheunemann, heretofore a paid lobbyist of the Republic of Georgia, and who still benefits financially from part ownership of the lobbying firm that continues to service the Georgia account. This is clearly a conflict of interest and indicates the corruption that is endemic to political campaigns of both parties. But to try to explain McCain's actions in this way is to misunderstand the man.

Scheunemann is merely a toad overstuffed by one too many lunches at the Capitol Grill, in sum, a typical Washington success story. But McCain is sui generis. If Scheunemann had never existed someone else would be writing precisely the same talking points for the presumptive Republican candidate. McCain's love of war and diplomatic brinkmanship is nothing if not sincere. Perhaps it is the only sincere thing about the man.

Democrats are finally stumbling onto the fact, although the press has yet to discover it, that McCain is a serial flip-flopper and prevaricator. Across virtually the entire spectrum of domestic policy McCain has held one position and then jumped to the polar opposite, apparently without noticing the inconsistency (and his pals on the press bus are too polite to bring it up):

A recipient of cash and favors from savings and loan fraudster Charles Keating, McCain reminted himself as the Conscience of the Senate, to the hosannas of an adoring and amnesiac press.

McCain could not in good conscience support tax cuts that disproportionately favored the rich – until he began to sniff the incense of a Republican presidential coronation ceremony.

He was against offshore oil drilling before he was for it.
Wearing the garb of the Serious Centrist (a mythical species that David Broder venerates), McCain railed against "agents of intolerance" like Jerry Falwell, but crawled to Canossa when Republican base-pandering mandated that he must give a cringing speech at Falwell's Liberty University.
Even on his signature issue of torture McCain postured as an implacable foe of the Bush policy right up until the primary season commenced. Since then he has voted "no" on measures that would ban torture or confine CIA interrogation techniques to those permitted by the U.S. Army Field Manual.
And so on. McCain's hypocrisy is perhaps somewhat more egregious than the practices of the average politician, but not markedly so. After all, politicians do not have principles, they have positions. No doubt the Democrats will make heavy weather of these flip-flops, as they are clearly entitled to. But in so doing they miss the central point about John McCain.

All these flip-flops illustrate McCain's near-total lack of sincerity: he doesn't really care about the issues at all. In practice he changes positions so easily because the positions themselves are throwaways. He is required to have them for political purposes, but they mostly bore and annoy him.

There is only one thing he cares about, and that is building an altar to Mars. War is the one fixed star in the McCain universe. You will find no flip-flopping or prevaricating there.

While McCain admits he doesn't understand the economy (and then denies that he doesn't), he claims unlimited expertise in national security matters. His belligerent megalomania with respect to the Georgian crisis has now, finally, even earned him a mild reproof from the neocon-friendly Washington Post: "Standing behind a lectern in Michigan this week, with two trusted senators ready to do his bidding, John McCain seemed to forget for a moment that he was only running for president."

In a development little reported in the U.S., Georgian President Mikheil Saakashvili "claimed that Georgia's ports and airports would be placed under U.S. military protection, a suggestion quickly denied by the Pentagon." Assuming that the Department of Defense is telling the truth (and granted that it is difficult to determine whether the Pentagon or Saakashvili is more prone to fabrication), then where did the Georgian president get his information that the United States would be militarily intervening? Given that McCain claims to talk to Saakashvili every day, and given a string of grandiose pronouncements by McCain and his handlers regarding Georgia, is it possible that he misled Saakashvili, either deliberately or by implication, to believe that U.S. military intervention would be forthcoming?

It is still unclear whether McCain promised Saakashvili anything, or whether it was simply the Georgian president's own delusion that he was the apple of Washington's eye, but McCain's buttinski tactics would already have been a major scandal if any other American politician who was not the sitting president had made such inflammatory pronouncements on foreign policy. As it is, McCain is already, in his campaign ukases, dramatically downgrading relations with Russia in a manner that suggests he thinks he is president.

The public is inclined to believe the worst of a politician when he is insincere, inconsistent, or dishonest; indeed, such personality traits are virtually what makes the typical politician as we know him today. But such creatures are merely nuisances, like mosquitoes. The really dangerous politician is one with an idée fixe, and when that obsession centers on the desirability of perpetual war, the possibility of catastrophe is all too real.

Given who he is, what makes him tick, and the potential that he might actually realize his ambitions on the world stage, John McCain is the most dangerous man in America.