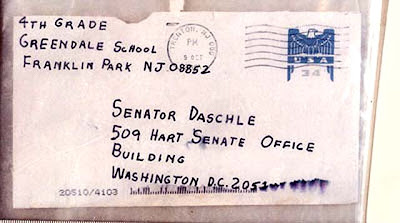 "You simply don't develop a new hyper-weaponized strain of anthrax powder for military defense, and then commission the top U.S. anthrax expert to report on this new weapon's capability and lethality from mailed delivery, unless that's how you foresee it being used." - Ingri Cassel, director, National Vaccination Liberation Association

The corporatists in the post-911 war profiteering loop derive a childlike thrill from their weaponized anthrax stockpiles.

A "new and highly lethal strain" was produced in advance of 911, a nameless Pentagon general told the New York Times in September 2001.

He mentioned something called Operation Jefferson.1 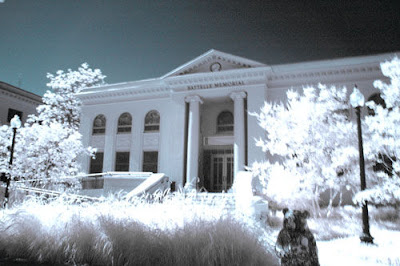 What was "Operation Jefferson?" Before the anthrax mailings, William Patrick III went to work at the Battelle Memorial Institute (BMI). Patrick holds five classified patents in the manufacture of weapons-grade anthrax.

BMI – a contractual partner of BioPort – hired him to conduct a risk-assessment study involving the dissemination of anthrax powder through the mail system.2 BMI is located in West Jefferson, Ohio. The work was done at the BL-3 Anthrax Lab.3

Battelle had exclusive control of the Ames strain, a fact the press has not made clear. It's true that Dugway Proving Ground had an anthrax program of its own, as reported, but Battelle directed that program as well. This narrows it down quite a bit...

The FBI was drawn straight to William Patrick III, Stephen Hatfill's "mentor" at Ft. Detrick, and Ken Alibeck, a BMI consultant with a background in CBW research for the Soviets.4

One independent Internet news site reports that the FBI investigated "the possibility that financial gain was the motive behind the anthrax mailings."

Two federal laboratories were searched, BMI and Dugway, but "a contradictory announcement was relayed the same day [December 21, 2001] by Ohio Senator Mike DeWine. Based on an ABC News report concerning a BMI employee who had been under FBI investigation for an anthrax threat, FBI Director Robert Mueller had, according to The Dispatch, assured Senator DeWine that the bureau was not investigating, nor intending to investigate, anyone with, or formerly with, BMI."5

Nevertheless, the FBI's stalling perplexed reporters assigned to the story. George Monbiot wrote in the Guardian in May 2002: "Last week, I phoned the FBI. Why, I asked, when the evidence was so abundant, did the trail appear to have gone cold? `The investigation is continuing,' the spokesman replied. 'Has it gone cold because it has led you to a government office?' I asked. He put down the phone." Had the FBI spokesman remained on the line, there were a number of related outrages he might have explained:

"The army's development of weaponized anthrax [the processed Ames strain], for example, directly contravenes both the biological weapons convention and domestic law. So does its plan to test live microbes in `aerosol chambers' at the Edgewood Chemical Biological Center, also in Maryland. So does its development of a genetically modified fungus for attacking coca crops in Colombia, and GM bacteria for destroying materials belonging to enemy forces. These, as the research group Project Sunshine has discovered, appear to be just a tiny sample of the illegal offensive biological research programmes which the US government has secretly funded..."6

Some of the government's anthrax has been weaponized, kills effectively but is otherwise useless. It is also illegal. Ingri Cassel, director of the National Vaccination Liberation Association, points out that vaccines "are developed to help guard against pre-existing threats." Ames was processed illegally, "apparently for offensive military uses, sabotage, and even terrorism. You simply don't develop a new hyper-weaponized strain of anthrax powder for military defense ... and then commission the top U.S. anthrax expert [William C. Patrick, III] to report on this new weapon's capability and lethality from mailed delivery, unless that's how you foresee it being used."7

Once the anthrax was weaponized – milled and capable of airborne transmission – BMI ran a classified test in the Nevada desert. This was in early September 2001.

It was reported that Patrick's study on the mailing of milled anthrax spores was instrumental to the test.

Were Stephen Hatfill recruited for the next phase of "testing?

"This appears to be the case and explains the FBI's capricious explanations to the press: "Operation Jefferson" is a federally-sanctioned covert
operation that would have never come to light had it not been for the
doggedness of independent journalists and the scientific community.

"In 1957, at the Dugway Proving Grounds in Utah, the Q-Fever toxin was discharged by an airborne F-100A plane. If a more potent dose had been used, the Army concluded 99 per cent of the humans in the area would have been infected. In the 1960s, conscientious objecting Seventh Day Adventists, serving in non-combat positions in the Army, were exposed to airborne tularemia..."8 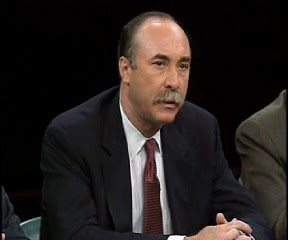 The West Nile outbreak and the anthrax mailings began with a 1998 BioVax meeting held in the Truman Room of the White House, attended by SAIC's Jerry Hauer and William Patrick.

Another participant at the meeting was William Cohen, who, as a Republican Senator, signed off on the heavily-spun Cheney-Hamilton Iran-contra report. In 2004, he was elected to the American International Group's (AIG) Board of Directors.

AIG is part-owner of Kroll Associates, the infamous private security firm. Kroll – run by former CIA, FBI, British secret service, Scotland Yard and British Special Air Service agents – was once known as the CIA of Wall Street because the firm did everything from corporate espionage to the training of foreign armies. A Kroll partner offers counter-terrorism instruction in Saudi Arabia.

Another attendee "of interest" at the 1998 Truman Room conference was Thomas Monath, former chief of the virology division at the SAIC-USAMIID facility at Ft. Detrick, and VP/chief scientific officer at BioVax, since renamed Acimbis.

Monath was a friend of Stephen Hatfill's. He was introduced to Rudolph Giuliani by Jerry Hauer, SAIC scientist and president of Rockefeller University - the fruits of this relationship were the aerial spraying of malathion, resmethrin or sumithrin in the New York City area.9 Nevertheless, the mosquito-borne disease has spread rapidly across the country.

The anthrax scourge also recurs from time to time. An increasingly feasible theory for the origin of Gulf War Syndrome is military experimentation with anthrax vaccines. Were the following incidents further "tests" of anthrax delivery systems by the "counter-terrorists" at SAIC-Ft. Detrick? ...

A) Exposure at a children's hospital – blamed on an "accidental" shipment of live spores from the Southern Research Institute in Frederick, Maryland. (BioPort director David Franz comes from SRI, a leading producer of depleted uranium - Franz worked closely with Bruce Ivins, and would later opine to the press that he found it hard to believe that his colleague was guilty as charged):

A possible shipping mistake in late May resulted in at least half a dozen researchers at Children's Hospital Oakland Research Institute being exposed to live anthrax.

Some of the researchers, working on an anthrax vaccine, handled the live anthrax bacterium and others were present at the time. So far, none have shown any signs of illness. Seven of the workers are taking the antibiotic Cipro as a precautionary measure, the Oakland Tribune reported.

State health officials said there is no risk to other staff or residents living in the area.

The researchers believed they were handling a dead sample of the anthrax bacterium. However, according to hospital officials, the researchers were mistakenly sent live anthrax by the supplier, Southern Research Institute of Frederick, Md.

The U.S. Centers for Disease Control and Prevention is investigating the incident. 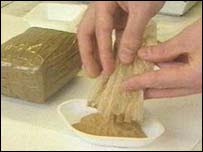 ANTHRAX, a virulent disease used as a biological weapon, could be responsible for a spate of deaths among heroin addicts in Scotland, it was disclosed yesterday.

Ten heroin users in Glasgow and one in Aberdeen have died of a
mysterious illness in the past three weeks, which led scientists, who had heard of a similar death in Oslo, to send the victims' blood samples to Porton Down, the biological defence laboratory.

Two of the five tested so far have shown low levels of antibodies to anthrax, suggesting that the addicts were exposed to the disease through a contaminated heroin supply.

Although the results are not conclusive, experts are carrying out tests
on the others who died and on nine more heroin addicts who have come down with the illness. One survivor still has the black scab that is typical of localised anthrax infection.

David Goldberg, deputy director of the Scottish Centre for Infection and Environmental Health in Glasgow, said that tests were also being made for anthrax spores on heroin batches seized by police in the city.

Meanwhile users were being advised to smoke the drug rather than inject it, and especially not to inject into the muscle.

He believes that the weak results in the anthrax test may be because all the victims were treated with antibiotics before their samples were taken.

6) George Monbiot, "Riddle of the spores: Why has the FBI investigation into the anthrax attacks stalled?" Guardian, May 21, 2002.