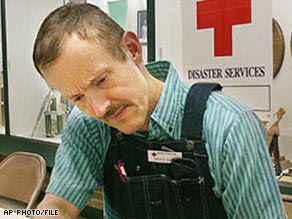 At least one of the anthrax mailings came from overseas, so neither of the key suspects could have possibly acted alone. Manipulation of the limited hang-out allows the FBI and controlled media to "clear" Hatfill - with fear of a libel suit ensuring that the press lays off him - but there is still a mountain of suppressed evidence that damns the beleaguered but now affluent virologist. The convenient "suicide" of Bruce E. Ivins, a patsy, takes the heat off of Hatfill completely, but he remains an obvious perpetrator, and the others will never be exposed ... according the the cover-up script ...

The West Nile Virus outbreak of 1999 made 67 people in New York City ill, and brought with it endemic anxiety. But the anthrax mailings two years later brought death and high anxiety. Emergency measures in a jingoistic package, under consideration in the House of Representatives, arrived at the same time as the Ames strain and the emergency measures floated through Congress on a cloud of lethal white powder.

Right-wing propagandists stepped up to finger the obvious culprit. Laurie Mylroie explained to CNN, "it takes a highly sophisticated agency to produce anthrax in the lethal form. Not many parties can do that." Saddam Hussein "continues his part of the war in the form of terrorism. It is unlikely that anthrax will remain in letters. It is likely that it will be used in the subway of a city, or in the ventilation system of a U.S. building. Saddam wants revenge against us. He wants to do to the U.S. what we've done to Iraq."

This cover story didn't hold up under the tension of scientific deduction, though. The true culprit - it emerged after Dr. Barbara Rosenberg of the Federation of American Scientists pestered the Bureau with facts and public exposure - was an obscure, right-wing biochemical warfare "counterterrorist," withal. The serial killer took his training at the NIH in Bethesda, Maryland and other civilian-run, federal facilities, also a two-year fellowship from the National Research Council, the country's leading CBW defense lab. He moved on to the U.S. Army Medical Research Institute of Infectious Diseases - USAMRIID - at Fort Detrick. He experimented with biological responses to filoviridae, the family of viruses that transmit Ebola. In September 1999 - as the Jerry Hauer-SAIC-Fort Detrick-USAMRIID West Nile Virus was taking hold in New York - the terrorist began working at the very same lab.

By March of 2002, it was clear that the FBI was protecting him. Spokesmen for the Bureau were evasive about the source of the anthrax but it gradually emerged, by process of elimination and genetic analysis, that the culprit worked at the same classified USAMRIID facility in Maryland that employed Jerry "West Nile" Haurer. 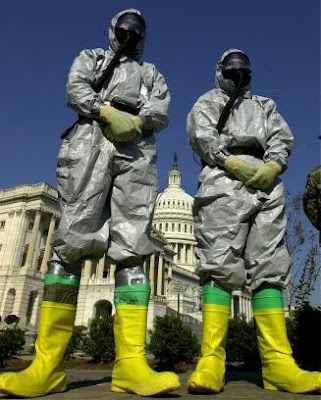 CounterPunch commented a month later on geographic connections that bore directly on the case: "The South African media [have] been abuzz with details of that nation's former biological warfare program and its links to the CIA. The South African bio-chemical war program was code-named Project Coast and was centered at the Roodeplat Research Laboratories north of Pretoria. The lab maintained links to the US biowarfare facility at Fort Detrick and Britain's Porton Down Laboratory. The head of the South African program, Dr. Wouter Basson, was reportedly offered a job with the CIA in the United States after the fall of the apartheid regime. According to former South African National Intelligence Agency deputy director Michael Kennedy, when Basson refused the offer, the CIA allegedly threatened to kill him." The U.S. pressured President Mandela to relinquish Basson's research files and they were transported to Fort Detrick.1

The FBI pushed on with the investigation but withheld from public disclosure that the terrorist had worked with Wouter Basson in South Africa, and that he'd been a member of the South African Nazi Party.

But some of Hatfill's closest friends maintained his innocence. Stan Bedlington, a veteran CIA agent, told the Washington Post that he'd known Hatfill for several years: "They were drinking buddies who'd both been involved in anti-terrorism efforts long before the World Trade Center crumbled. Now, suddenly, people were saying that Hatfill could be responsible for the country's first case of domestic bioterrorism, a release of lethal anthrax through the mail that had left five people dead and 17 others infected in the fall of 2001."

Bedlington had fond memories of Hatfill, though he hadn't seen him for some time. They'd met at a Baltimore symposium on bioterrorism. Bedlington had spent six years bent over a senior analyst desk at the CIA's Counter-terrorism Center. Hatfill was a virologist at the U.S. Army-SAIC Medical Research Institute of Infectious Diseases, "where he'd begun making a name for himself preaching the dangers of a bioterror attack. Soon they ran into each other again at Charley's Place in McLean, then a favorite hangout for the U.S. intelligence community." Hatfill "showed up there with men whom Bedlington recognized as bodyguards for Saudi Arabian Prince Bandar bin Sultan."2

To respond to intrusive media, Hatfill's friend Pat Clawson served as spokesman. Clawson was a radio executive who worked with Iran-contra's Oliver North.

Clawson, reports the Baltimore Sun, was a "former CNN reporter who has known Hatfill socially for six years, said he and Hatfill are part of a group of friends who visited a house in the Virginia mountains near Shenandoah National Park in October for a weekend of skeet-shooting and socializing. The visit, in the middle of that month, came at the peak of anthrax hysteria, Clawson said. He told Hatfill that a few weeks earlier he had opened a vitriolic letter addressed to Oliver North, whose radio program is produced by Clawson's employer, Radio America. White powder had spilled from the envelope, which Clawson discarded"3

After Stephen J. Hatfill was named as the FBI's leading suspect, the same ultracon media opinion-shapers who had immediately blamed Saddam Hussein now hustled to Hatfill's defense. Rupert Murdoch's Evening Standard opined that his status as "interesting" to federal inevestigators "inspired a mini-industry of speculation that he may somehow be implicated in last fall's deadly anthrax attacks. [But] much of that speculation pretends to be something more: certainty of his guilt, and certainty that in every nook and cranny of his life must be found some blot or scar or mark of the devil that proves his guilt"4

A peek at a few of those nooks and crannies are proof of Hatfill's guilt:

• Bloodhounds found him of some interest after snuffling letter inside of
envelope put there by Hatfill, preserved in a hermetically-sealed bag. The
hounds responded to him alone.

• A return address on one of the anthrax-bearing envelopes was Greendale,
Rhodesia. Hatfill lived in Greendale.

• The neo-fascist Selous Scouts in Rhodesia spread anthrax. Hatfill was a
member of the Scouts at the time of the contagion's spread.

• Hatfill had no fit alibi for the days of the anthrax mailings.

• Hatfill's PhD was forged. He was caught lying on his resumé.

Some of most damaging evidence was discovered in ponds recently searched near his home. Items pulled from the mud included a clear box with insert holes for rubber gloves to protect someone working with toxic materials. Also recovered were glass vials in plastic wrap, and gloves.5

One wonders which expletive David Kay, the SAIC vice president and Hatfill's
boss, whispered to himself the moment he heard that these items had been
found not to mention a positive lab test for traces of anthrax FBI technicians detected on these objects, later changed to "inconclusive."6 But then, Kay was out of the country, conducting a WMD "search" of his own