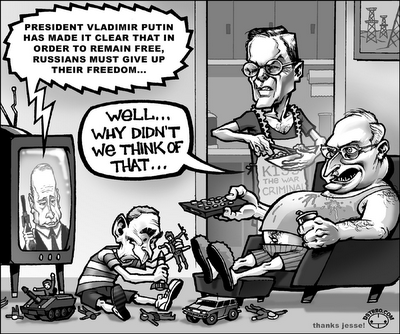 [This is a repost: The entire Khashoggi/9/11 series can be found on the Net. Parts 1-25 are not posted here, but the latest entries, parts 26 onward, can be found in the archives of my site. - AC]

TWO YEARS before the towers in Manhattan crumbled under the weight of global political corruption, a spate of bombings in Russia left surviving relatives and those injured in the blasts, as CNN reported on September 10, 1999, "searching for answers." 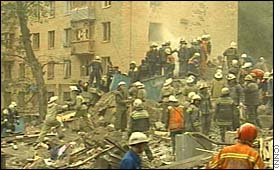 At least 90 bodies, including seven children, were dragged from the wreckage of a bombed-out apartment building in Moscow in early September 1999. Russian Prime Minister Vladimir Putin, in a televised speech, suspected terrorism; if so, he said, "we are facing a cunning, impudent, insidious and bloodthirsty opponent."1

CNN reported: "Russian President Boris Yeltsin declared a day of mourning on Monday for the victims of Russia's last three explosions and bombings - the Moscow blast, the bombing of a shopping center near the Kremlin and the September fourth car bomb that demolished another apartment building in Buinaksk, in the southern Russian region of Dagestan"

By the third week of September, the death toll rose to over 200. Chechen forces were behind the bombings, Yeltsin proclaimed, a belief shared by Yuri Luzkhov, the mayor of Moscow. Interior Minister Vladimir Rushailo oversaw the investigation and announced that the Russian government "will consider itself within its rights to use all resources at its disposal to rebuff the aggression."2

And none of this added up.

The harried Russian proles were quick to accept the government's explanation that Chechens were responsible for the blasts in Moscow and the Caucasus. But the Asia Times editorialized, "it is highly unlikely." And no one stood to benefit by the outbreak of bombing but but, well ... Boris Yeltsin ...

In a statement of denial, Chechen leader Shamil Basayev stated, "We had nothing to do with the explosion in Moscow. We never kill civilians. This is not our style."

Provisions anticipating the Patriot Act were proposed. The Duma considered
declaring a state of emergency. Until the bombings, the public had steadfastly opposed such measures, but even Yegor Stroyev, Federation Council speaker (the Council is the upper hall of parliament) had to admit that he'd firmly opposed emergency measures in the past but after the second Moscow explosion, well, there was an obvious "need to consolidate the legal base for combating the rampage of terrorism and crime."3

Still, there were the usual skeptics. 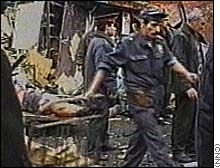 Viktor Ilyukhin, a Communist leader, dismissed the bombings as provocateur actions: "Political hysteria is being fanned artificially, including by way of explosions to cancel parliamentary and presidential elections through a state of emergency."4

Day by day, the true, sordid details emerged in Versiya, Novaya Gazeta and England's Independent to erode Yeltsin's credibility. It developed that there was more to the bomb plot than the government had revealed that its true
origins lay not in the Russian satellites ... but in a meeting of conspirators held at the flat of ADNAN KHASHOGGI.

"It is clear that apartment explosions in Moscow would not have happened if
somebody in the Russian political elite did not want them," Novaya Gazeta
opined on January 24, 2000. "One by one, pieces of puzzle were put together. 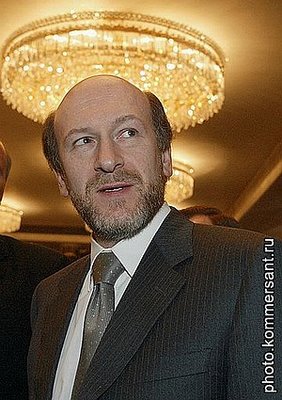 But there were a few details that were lacking. They began to clear in January, when Zhirinovsky and Chubais finally broke up. And at the same time, some of the participants started to tell their version of events. In the Versiya newspaper, there was an article about the meeting of [Alexander] Voloshin with [Shamil] Basayev in France." Basayev was the radical Muslim leader who planned the violence on Dagestan. "This did not happen in Paris, as some of the newspapers reported later, but on the villa of Adnan Khashoggi, gadfly Arabic millionaire, on the Mediterranean."

French intelligence agents monitored the meeting and details surfaced in the public print. Khashoggi denied that he had attended the meeting. But Its main participants - Anton Surikov, "formerly" of Army special forces, and Aleksandr Voloshin, Yeltsin's Chief of Staff - offered no comment. When reporters asked Surikov, he claimed that he hadn't travelled abroad in years, especially not to France. This did not quite square with the public record, however, Just a few months before, he was in Washington, D.C. to meet with Yuri Maslukov, Russia's deputy prime minister, and Michel Camdessus, managing director of the IMF. Surikov had also flown to France on a couple of occasions - once in December 1994, and again in the summer of 1999. He had departed on June 23 aboard an Aeroflot bound for Paris, in fact, and returned from Nice on July 21, nearly a month later.5

A book on the Russian spy agency, Spetzsnaz GRU, written by former spies, reports that when the rebels entered from Chechnya, the government's forces were "commanded not to enter into battle with them and not to hinder the movement of the rebels."6 (We've seen the same intelligence "lapses" in the U.S.)

The 1999 bombing campaign punctuated an uneasy period of calm. From August 1996 through August 1999, Chechnya had been relatively still. "Hostilities resumed following a bold incursion from Chechnya into neighboring Dagestan by an 'international' force of Wahhabis," John Dunlop at the Hoover Institute reports, "whose titular leaders were the legendary Chechen field commander Shamil Basaev and the shadowy Arab commander Khattab. In September of 1999, there occurred the notorious terror bombings of large apartment complexes in Moscow, Volgodonsk and Buinaksk which served to infuriate the Russian populace in a way similar to the American public's reaction to the events of 11 September in this country. On 23 September, Moscow once again commenced the bombing of Chechnya, and the second Russo-Chechen war of the past decade was on."7

Alexander Voloshin, who attended the meeting at Khashoggi's villa, is a
singular political figure in Russia – outspoken in his support of the United States ... in temperament, well, comparable to an American Cold Warrior, an Al Haig or Donald Rumsfeld. 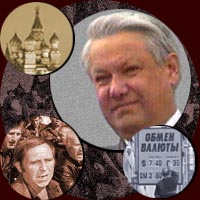 On October 23, 2003, the Guardian reported that Vladimir Putin's chief of staff was at the center of "a furious row" between Moscow and Kiev "after he reportedly suggested Russia might bomb Ukraine if it did not back down in a diplomatic tiff over a small island between the two former Soviet states. Alexander Voloshin, the head of the president's administration, made the remarks while he was briefing Ukrainian journalists at the Kremlin. The row is over 100 metres of sand."8

In the end, however, Voloshin was forced out of government not for his ties
to the meeting at Khashoggi's villa, or to terrorists, but to Big Oil: 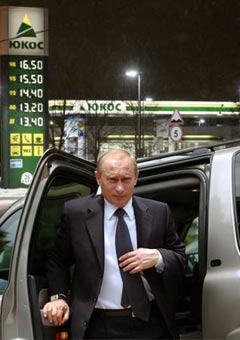 MOSCOW: Moscow press reported Wednesday that Kremlin's powerful chief of staff had resigned in protest of the arrest of a top oil tycoon in a widening political scandal on the eve of Russian parliamentary elections.

Newspaper reports said that Voloshin had handed in his resignation on
Saturday only hours after Russia's richest man, Yukos Oil magnate Mikhail Khodorkovsky, was hauled in by secret service men at gunpoint in a Siberian
airport and flown to Moscow for questioning. 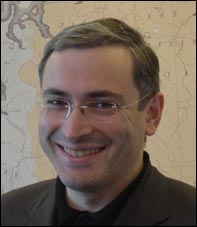 Yukos Oil magante Mikhail Khodorkovsky before his fall from grace

Voloshin, 47, is seen as one of the last figures in the Kremlin to have hung on from the era of Putin's predecessor Boris Yeltsin and a leader of an administration clan known as "the Family" that battled the hawkish "siloviki" camp of former secret service agents that recently emerged in Putin's court. He was seen as a strong backer of big business and an instrumental Kremlin aide who managed to skilfully mediate between the various administration factions and parliament lawmakers on key economic reform issues.

His potential resignation had been rumoured in Moscow for months as the
Family – which supported big businesses including Yukos – was being squeezed out by the "siloviki" clan.

Western investors said that Voloshin's resignation – if officially confirmed – would mark an escalation of political instability on the eve of December 7 parliamentary elections.

"Assuming Voloshin's departure is confirmed today, this will only underline
the seriousness of the political crisis resulting from Putin's decision to deal with the political problem of Khodorkovsky using KGB methods," the United Financial Group wrote in a research note. The investment house noted that Voloshin "seems to have made himself indispensable to Putin as a discreet but effective administrator with a good grasp of the reform policy agenda and adept at arbitrating between competing interests." Besides heading Putin's administration, Voloshin for the past four years has also served as chairman of the board of the United Energy System electricity monopoly that has been struggling to undertake reforms for the past four years.

But the United Financial Group predicted that Putin would probably try to seek a balance within his administration and was unlikely to give the post
to any of the top members of the secret service Kremlin factions.

Voloshin became deputy head of Yeltsin's administration in 1998 and became chief of staff the following year. He was attributed with drafting economic portions of Yeltsin's speeches. Putin kept Voloshin on his post when he took the presidency following Yeltsin's abrupt resignation on December 31, 1999.9 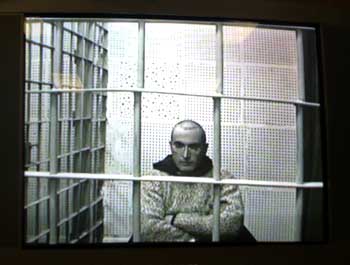