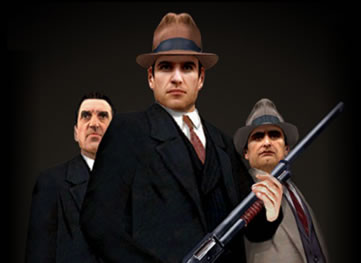 (NOTE: Further information on the Comair crash in posted in the Sept.-Oct. archives.)

"Lies that life is black and white
Spoke from my skull.
I dreamed Romantic facts of musketeers
Foundationed deep, somehow ... "

Two of the investment houses financing the Intergraph deal have been shown to be bloodless vermin. The buyout partnership has been divided into parts, and the degrading secret histories of each laid open like a patient on a table. The Texas Pacific Group and Hellman & Friedman are financial and political opportunists who prey on the free market in the pursuit of fascistic objectives in collaboration with the clandestine "services." But there is one more component to this consortium of swindlers, Nazis and spies that hasn't been mentioned – JMI Equity in San Diego.

JMI Equity is another financial bucket shop with connections to European fascists and the intelligence underworld, but one other criminal faction wields influence at JMI – the Mafia. 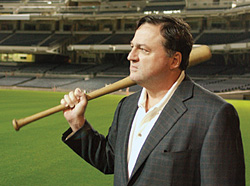 JMI was founded in 1992 by John Moores, owner of the San Diego Padrés. Moores' career is as littered with casualties as any examined so far. 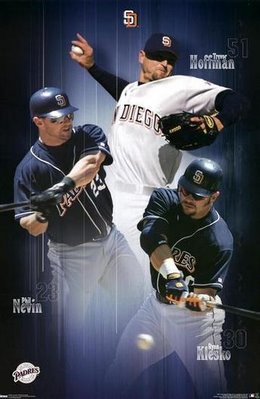 "ARE THE PADRES MARRIED TO THE MOB?"

... and it appeared to be the case. The scandal turned on a couple of entrepeneurs "with less than stellar reputations" who repeatedly kicked in Padré sponsorship fees in the six figures. They ran a diet-drug company called Metabolife, founded by Michael Ellis, then "on probation for a 1988 federal conviction stemming from methamphetamine-making in Rancho Santa Fe." Ellis fought a sustained legal fight to keep his court file sealed, with no success. "When it was opened in November, it and related civil cases revealed that Ellis and his friend and codefendant Michael Blevins (who allegedly dealt marijuana and cocaine for 20 years) were allegedly promoting real-estate deals on Otay Mesa done with cash the government said was from Blevins's drug trade. Blevins, who served three years in prison on the methamphetamine rap, and who a government agent claimed was once an associate of reputed Chicago mob boss Sam Sarcinelli, is also a founding partner of Metabolife.104

The Union-Tribune reported in May 1999 that Metabolife 'is closely associated with the ball club and is one of the team's 1999 corporate sponsors. It pays for Qualcomm Stadium signage that is visible on television, sponsors the 'Seventh Inning Stretch' during the game, and advertises on the Padres' radio broadcasts. In those commercials, Padres announcer Ted Leitner endorses Metabolife's herbal dietary supplement, 'It changed my life!'"105

Moore's advisor on sponsorship deals was Jay Emmett, who lived in Manhattan and sat on the Padres' board. Emmett was president of the now-defunct Entertainment Sports International, Inc. 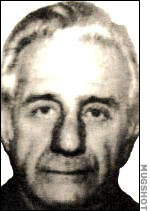 In the '80s, Emmett was a ranking executive at Warner Communications, proprietor of Warner Brothers studio and sundry other entertainment assets. In September 1980, Emmett was indicted on bribery and racketeering charges "for his role in the infamous Westchester Premier Theatre scandal. The theater, built in the early 1970s on a dumping site near New York's Tappan Zee bridge, became noted as the place where Frank Sinatra was photographed in 1976, beaming alongside New York's top mafiosi, including Thomas Marson, Carlos Gambino, Jimmy 'the Weasel' Fratianno, and Paul Castellano. 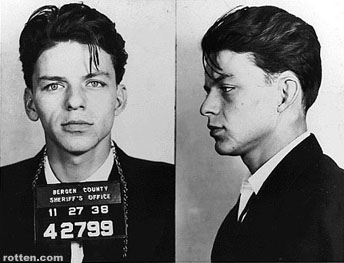 Master of the Game, author Constance Bruck's 1994 biography of Time-Warner CEO Steve Ross, offers that "the theater was a Mafia front from its inception." Partners in the theater included Richard 'Nerves' Fusco of the Colombo crime family, and Gregory De Palma, a soldier for the Gambino family. "Later, Salvatore Cannatella, who, the government would allege, was connected to the Genovese family, would put $1.4 million into the theater and assume a dominant role. "Besides performances by Sinatra, Bruck notes, the theater was the scene of all manner of rackets. 'Skimming was incessant, with cash looted from the box office to pay back some of the 'shylock' money that had been used to start the theater and to line the pockets of those at the theater."

Sinatra, a ranking stockholder in Warner, "had been recruited to appear at the theater by Louis 'Louie Dones' Pacella, who worked for Frank 'Funzi' Tieri, head of the Genovese family." Jimmy Fratianno, a mobster turned federal informant, "implicated Sinatra in the theater's skimming operation. 'Fratianno told prosecutors that De Palma had paid Sinatra $50,000 or $60,000 in cash, in Las Vegas, to persuade him to play the theater in 1977.'"

Another key investor in Westchester Theater was Tommy Marson, "a former New York plumbing contractor who had relocated to a sprawling mansion in Rancho Mirage near Palm Springs. He frequently did business in San Diego County and owned property on Otay Mesa. Among Marson's other friends were mobsters de Palma, Jimmy 'the Weasel' Fratianno, Mike Rizzitello, Dominic Brooklier, and Frank 'the Bomp' Bompensiero [later to be found shot to death in a Pacific Beach phone booth]." The FBI, "in search of information about Alfa Chemical Company, a cleaning-services company owned by Marson, Fratianno, Teamsters head Jackie Presser, and Las Vegas mafioso Tony Spilotro, bugged Marson's Rancho Mirage home in 1977. The FBI agents heard those present in Marson's house discussing 'extortion, loan-sharking, land frauds, bribery, and bankruptcy frauds.' They also heard about Marson's investment in the Westchester Premier. From a series of other informants, the feds soon learned that the corporate brass at Warner Communications had invested large sums of money in the theater and had accepted at least $170,000 of cash bribes in return. Jay Emmett was fingered as the principal go-between. 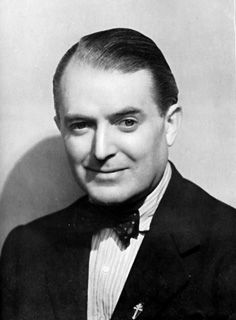 "Though the government never said what the kickbacks paid to Warner by the mob-run theater were used for, theories abounded." One theory held that "the cash was needed for payola in WCI's record business. Or, for entertaining WCI's performers, which would include providing them with their drugs of choice," according to Bruck. Campaign contributions to Richard Nixon were also suspected. Mafioso Tony 'the Pro' Provenzano, who was an associate of a Warners executive, 'in early 1973 collected about $500,000 in cash for Nixon and arranged to have it delivered to Charles Colson.... And Colson, during this period of time, was a highly paid consultant to WCI.'" (A friend and associate of Charles Colson died in the Comair crash, and this connection will be discussed in the section on that passenger.)

Emmett was dragged to court in September, 1980.

He agreed to a deal with prosecutors and pleaded guilty to two felony counts. Jay Emmett was summarily evicted from the Warner board of directors. "Emmett had been advised by Micky Rudin, Sinatra's agent and attorney, to assert his Fifth Amendment right against self-incrimination when called before the federal grand jury investigating the case, but had been told by Warner corporate counsel Arthur Liman to testify."

Liman, a partner at Paul, Weiss, Rifkind, Wharton & Garrison, had a rather large role in covering up the Iran contra affair, also the Attica riots. The Infoplease web site describes Liman as a "prominent legal strategist for tycoons and criminals."106 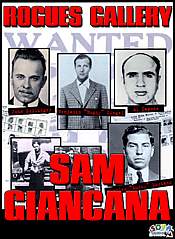 When Emmett went shopping for legal cousel, Liman referred him to Edward Bennett Williams, "an ultra-connected [particularly at the CIA] Washington defense lawyer, as his attorney. Williams's client roster included Frank Sinatra, along with Teamsters Union head Jimmy Hoffa, Mafia godfather Frank Costello, and Sam "Momo" Giancana." Williams freed Giancana from prison "only to later see him gunned down in a bloody 1975 mob hit after he returned home to Chicago from an agreed-upon Mexican exile, prepared to testify to a congressional committee about what he knew about the CIA's purported role in the assassination of John F. Kennedy." 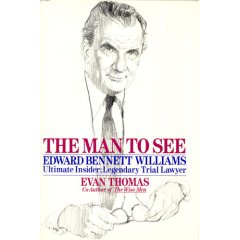 Williams, it seems, had a protégé – Lawrence Lucchino, co-owner, with John Moores, "of the Padres."

When Lucchino went looking for a team to invest in, he "was introduced to John Moores, who wanted to buy the Padres and build a new stadium. Someone at Alex Brown [a brokerage firm] in Baltimore ... told him that he should hook up with me and that we should talk," Lucchino explained to a reporter. "I met with Moores and he turned out to be such a charming and attractive partner that it made my decision easy, and I chose to join with him and come [to San Diego]." Emmett "was an integral part of the deal." 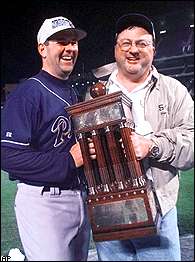 WHO IS JOHN MOORES?