THE FALCON: A "Mach-10 unmanned aircraft that can spy on foreign powers, drop bombs or even lob satellites into orbit... " 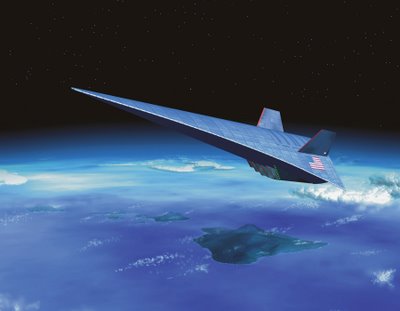 A decade after the retirement of Lockheed Martin's Mach-3 SR-71 Blackbird spy plane, the Air Force is preparing to test a plane that flies more than three times as fast. Two Falcon Hypersonic Test Vehicles, built by Lockheed Martin with input from NASA and the Defense Advanced Research Projects Agency (Darpa), will take to the air in 2008. The $100-million program aims to field a Mach-10 unmanned aircraft that can spy on foreign powers, drop bombs or even lob satellites into orbit.

The Blackbird, which was first retired in 1990 then briefly resurrected between 1995 and 1997, reached its Mach-3 top speed by way of its hybrid Pratt & Whitney J-58 engines, which featured a conventional turbojet engine installed inside a ramjet optimized for supersonic flight. At low speeds, the turbojet did most of the work; at high speed the turbojet throttled back and the ramjet took over.

Engineers are improving on this so-called "combined cycle" to propel the Falcon, using a more powerful "scramjet" in place of the ramjet. "We need propulsion that transitions seamlessly from Mach 0 to Mach 9 or 10," says Lockheed Martin's Bob Baumgartner.

"For low speed, we're looking at turbine engines that can perform at speeds from Mach 0 to Mach 4, then a scramjet ... that takes over anywhere between Mach 2 and Mach 4 and goes up to higher Mach numbers -- depending on the fuel, up to Mach 10," says Steven Walker, a Darpa researcher. "For sure, we know how turbines work, but we don't have turbines that work at Mach 4."

"The scramjets are still at a low-technology readiness level," he adds. "Combining both flow-paths and looking at how you transition from one to the other and the transition back ... that's all new, break-through technology."

"Thermal protection ... is the next major enabling technology," Baumgartner says, referring to ways of coping with the high temperatures that Mach-10 flight generates. "We're looking at durable metallic thermal protection panels to withstand heat and keep it away from structure. We're also looking at ceramic panels."

Foil insulation is an option too, he continues. And for the engines, developers are looking at new ceramic or metal-alloy coatings that can withstand temperatures reaching thousands of degrees.

Lockheed Martin's Craig Johnston, who works on a hypersonic engine project, sees many applications for Falcon and similar vehicles. "I can easily envision this technology eventually making its way into advanced aircraft ... something like long-range strike aircraft, supersonic bombers or future fighters."

Darpa also foresees using Falcon to cheaply launch small satellites. "Falcon will develop a low cost, responsive Small Launch Vehicle that can be launched for $5 million or less," an agency statement reads. "The SLV will be capable of launching small satellites into sun-synchronous orbits and will provide the nation a new, small-payload access to space capability."