The Lexington Comair Crash, Part 15: The GPS Angle – Who is John Moores? 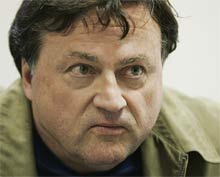 John Moores has a fat address book that the FBI needs to confiscate. 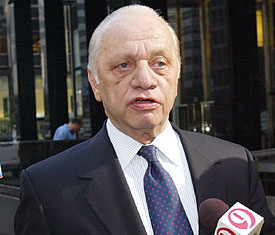 In 1993, a new stadium (subsidized by the residents of Baltimore) was built for the Orioles. Peter Angelos, a local attorney who made his fortune in asbestos suits, Tom "Red Dawn" Clancy and other minority investors picked up the team for $173 million. Lucchino collected a tidy 11 percent commission. 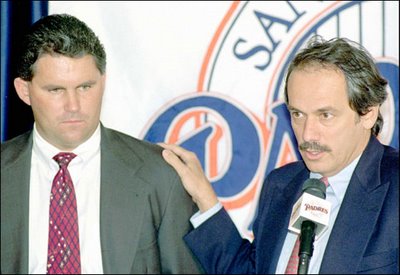 In a 2000 exposé, the San Diego reader recalled Lucchino's first meeting with the magnate. Moores was looking to to buy the Padrés at the time – "Someone at Alex. Brown [brokerage] in Baltimore ... told him that he should hook up with me and that we should talk," Lucchino says. "'I met with Moores and he turned out to be such a charming and attractive partner that it made my decision easy, and I chose to join with him and come [to San Diego].' By all accounts, [Mafioso Jay] Emmett was an integral part of the deal."107

As for the CIA, the interaction of the Agency with the organized sports world (a hive of organized crime) is not uncommon. 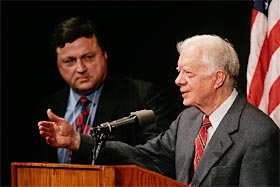 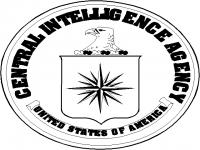 The Cincinnati Reds, San Diego Padres, Houston Astros and Philadelphia Phillies are on very friendly terms with the Agency. One wag notes in his blog, "It has now become public during investigations into the CIA practice of exporting torture known as 'extraordinary rendition' that Red Sox part owner Phillip H. Morse, a multimillionaire Florida businessman knowingly leased his private Gulfstream jet – complete with Red Sox decals – to The Company, who then kidnapped Abu Omar on the streets of Milan Italy in 2003 before sending him to Egypt where he was tortured horribly for more than a year. 'They hit him day and night. They made him listen to sounds at full blast, which was the reason why his hearing was impaired. They closed him in a sort of sauna and then in a refrigerator cell' [Chicago Tribune, June 25, 2005]."108

John Moores' interaction with the Bush syndicate and CIA comes through his work at JMI Equity (the firm bears Moores' initials) in San Diego, one of the score of companies he has founded, including a dozen or so software concerns in Texas.

This curious episode, reported on September 06, 2005 by Editor & Publisher, is the sort of thing that may be not be of seismic importance, but is unforgettable:

"The seemingly carefree behavior of top Bush administration officials early last week, who stuck to their vacations as tens of thousands cried for help in New Orleans, gained another twist with revelations that Pentagon chief Donald Rumsfeld was taking in a ball game in San Diego last Monday night – about 24 hours after Katrina hit ... [From the San Diego Union-Tribune] 'Baseball Hall of Famer Dave Winfield wasn't the only VIP who joined Padres President John Moores in the owner's box last night at Petco Park. Secretary of Defense Donald H. Rumsfeld, here to join President Bush at the North Island Naval Air Station today, took in the game, too. Three weeks ago, Winfield stopped by the Pentagon with his family and later joined the Padres as they visited wounded soldiers at the Army's Walter Reed Hospital during a road trip. 'Winfield was very moved by the experience,' says his agent, Randy Grossman. 'So he invited Rumsfeld to the Padres game. After the first few innings, the plan was to shift to dugout seats, for a closer look at the action."109 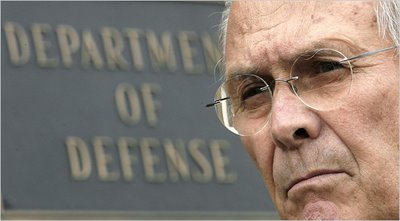 And then there is the former chancellor of the University of California at San Diego, currently president of the UC system, Robert Dynes (see part 13), the aforementioned close friend of Randy "Duke" Cunningham.

Matt Potter, in the San Diego Reader on March 23, 2006, reported that State senators "would soon question Dynes's leadership ability. In an era of state budget shortfalls, the University of California was in transition. Venture-capital financiers were taking over much of the university's research agenda, and administrators' bonuses, according to one state senator, reflected 'corporatization.' Dynes was well connected, with a wealthy wife and father-in-law [F. Warren Hellman] who was closely tied to California's financial establishment. Collaboration with industry was Dynes's vision for the university's future. 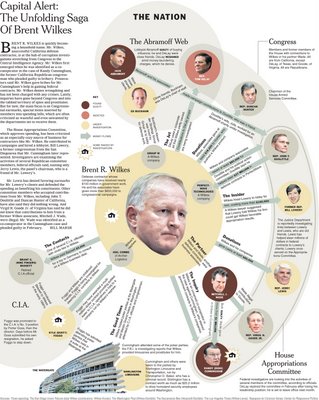 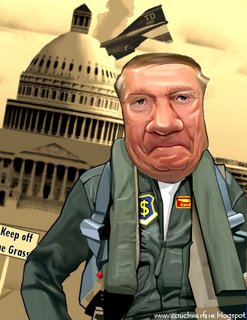 This next step returns us right back to a circle that recurs in this story: "Randy 'Duke' Cunningham was not alone in his fondness for Dynes.," we learn. "The San Diego establishment loved Dynes when he was UCSD chancellor. He had cozy relationships with Qualcomm's Irwin Jacobs and with Padres owner JOHN MOORES. The Union-Tribune was enthusiastic about Dynes and the direction UCSD was taking. 'Dynes, a physicist by training, keenly understands that close cooperation between academia and high-tech entrepreneurs is the surest way to accelerate the new economy,' effused a December 2000 editorial. ... "Dynes spent 22 years at AT&T Bell Laboratories before joining UCSD. His considerable experience in the private sector gives him a healthy appreciation for the bottom line."

Moores and the UC president were tight business associates as well as friends: "In July 1999, according to a filing with the Securities and Exchange Commission, Regent Moores and Chancellor Dynes joined the board of Leap Wireless International, a company Qualcomm had spun off the previous year."110

The fate of Leap Wireless doesn't bode well for Intergraph:

"In April 2003, Leap, loaded up with more than $2.4 billion of debt, went bankrupt, blaming a downturn in the demand for its 'Cricket' flat-rate wireless services following the burst of the dot-com bubble. Critics claimed that the company had been badly mismanaged and the board of directors was A FRONT." And it WAS a front - for the CIA and Mafia, as we've seen.

"A bankruptcy-court judge ruled that the company was 'hopelessly insolvent.' Stockholders were wiped out. Leap emerged from bankruptcy in August 2004, but by then both Dynes and Moores were gone from the board. 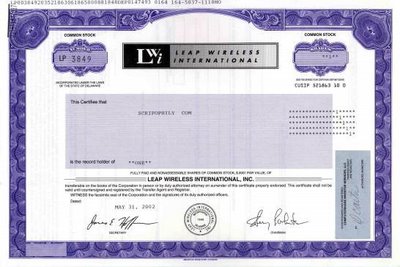 Original issue of Leap stock: "Leap, headquartered in San Diego, Calif., is a customer-focused company providing innovative communications services for the mass market. Leap pioneered the Cricket Comfortable Wireless service that lets customers make all their local calls from within their local calling area and receive calls from anywhere for one low, flat rate. Leap has begun offering new services designed to further transform wireless communications for consumers. In March 2000, the company's stock traded for $100 / share and it's now hovering around $1/share. Some of the investors may want to leap without wires."
[See: www.scripophily.net/leapwirininc.html]
_________________________________
"In October 1999, Hellman's investment firm and Moores paid an undisclosed sum to buy a small but rapidly growing South Carolina outfit called Blackbaud, Inc., which created accounting software for nonprofit organizations. Hellman's son Marco became chairman of the board."

Then an incredible denial: In a January 2000 interview, the UC officer was asked about Blackbaud, and "Dynes said he'd NEVER HEARD OF IT and was unaware of any other investments Moores and Hellman had made together. By then, Securities and Exchange Commission records showed, the two men had jointly invested in at least one other venture, Mitchell International, a San Diego-based data provider. In November 2004, Hellman and Moores purchased Vertafore, a software provider for insurers. In July 2005, Hellman & Friedman and JMI Equity, an investment firm controlled by Moores, acquired DoubleClick, Inc., an Internet-related firm, from its stockholders for $1.1 billion." 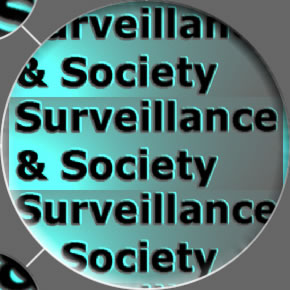 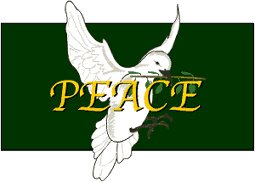