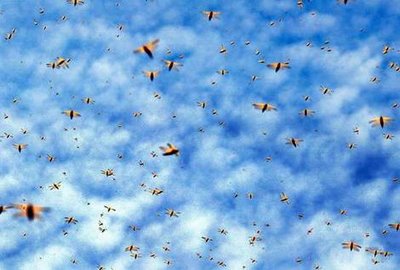 To her, death is quite romantic.
She wears an iron vest.
Her profession's her religion,
Her sin is her lifelessness ... "
– Bob Dylan
"Desolation Row" 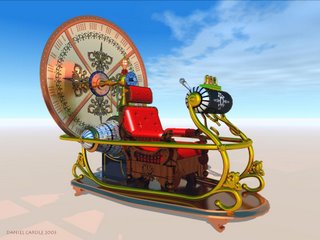 Haroldson L. Hunt was born in Fayette County, Illinois in 1889 – the same year that a devastating flood in Johnstown, Pennsylvania, the worst in American history to date, left 2,200 dead. It was also the year Thomas Huxley published an essay on agnosticism. 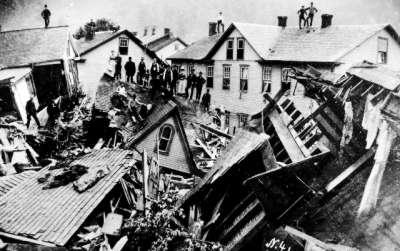 H.L. Hunt incorporated the Placid Oil Co. in 1935, and Excelsior Refining a year later. Haroldson set up his base of operations in Dallas, Texas. It was reported after WW II that Hunt was the wealthiest man in the United States. His political outlook was increasingly reactionary and "conservative."

In 1951, Hunt threw himself into the MacArthur for President campaign. To turn back creeping left-wing deviance (and its designs on his wealth a privilege), H.L. and his sons, Nelson Bunker and Lamar, founded an ultra-conservative intelligence cell, the International Committee for the Defence of Christian Culture. 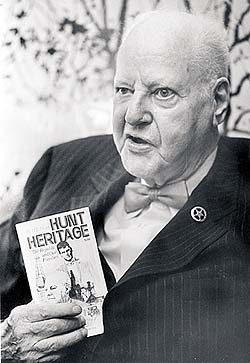 H.L. allied himself with the John Birch Society and befriended General Edwin Walker.


He despised Castro, and supported the Cuban Revolutionary Council, a CIA-Mafia hybrid. GHW Bush and Nazi spy George DeMohrenschildt were among his intelligence contacts. Remnants of Operation Underworld – the recruitment of Mafioso, deployed during WW II for covert operations against Il Ducé – were mustered after the war for Operation Mongoose – Lansky, Roselli, Ginancana, Costello, and other organized black baggers, gun runners and hit men. (Debby Conway's "CIA-Mafia" timeline ((http://www.jfklancer.com/cuba/index.html)) plots the interaction by way of FBI files, memos and investigative reports).

... Forty years later, a multitude of disparate names, business fronts and secret histories have been traced from Lexington to Dallas and California and back to Dallas again. The name Hunt surfaces. In the process of "following the money," you come to the edge of the TPG-H&F-JMI-Deutsche-AB investment circle – Redwood Investments, the Hunt family's hotel venture capital arm.

The path has been lined with the dregs of domestic industry and finance – Darwin Deason, Jack Abramoff, Kovar and Wilkes, the Wyly and Bass brothers, and so on, all tied to Dallas.

Now to take this right-flanking colonnade, the many disparate names, histories, etc. and reconstruct them, working back to the center - Dallas. 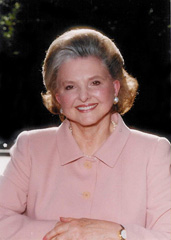 The prime of Caroline Rose Hunt

The names Caroline Hunt and Rosewood may not seem particularly significant to the casual observer. Rosewood Hotel is the crown of a posh hotel chain headquartered in Dallas, Texas.

The investment firm of the same name is also a Hunt asset. Current Rosewood projects include the development of luxury hotels in Los Cabos and Jeddah, Saudi Arabia. Business Travel News reports, "Luxury hotels have benefited from increased demand boosted by the resurgence of corporate profits, and hoteliers within that tier are capitalizing on that demand."114 The Hunt family of Dallas owns the chain and Caroline Hunt is chief
executive.

The Hunt family, of course, is widely-known for involvement in the JF Kennedy murder.115 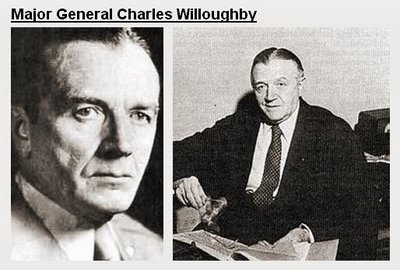 Not much has changed over the years. 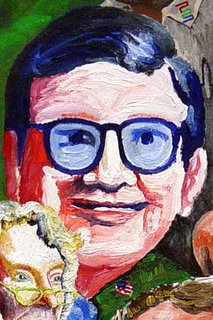 A few more steps ... and it all gathers around the center of gravity. Bob Fitrakis, writing in the Columbus Free Press in 2004, put Caroline Hunt in context, starting with her ties to Howard Ahmanson, Jr., "... a fundamentalist Christian [and] multi-millionaire who uses his fortune to promote so-called traditional family values. ... By waving fortunes under their noses, Ahmanson has the ability to cajole candidates into backing his right-wing Christian agenda. Ahmanson is also a chief contributor to the Chalcedon Institute that supports the Christian reconstruction movement. The movement’s philosophy advocates, among other things, 'mandating the DEATH PENALTY FOR HOMOSEXUALS AND DRUNKARDS.'"

(The Quandts and Deutsche Bank had found their water level – a Google search for "Deutsche Bank" and "Holocaust" boots over 86,000 hits – in this cabal.)117 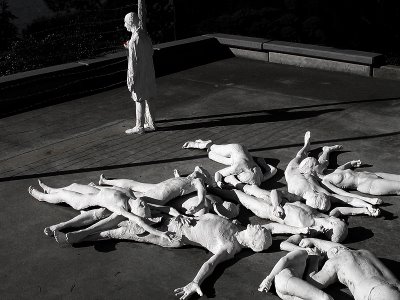 The Ahmansons sold their stock in American Information Systems (AIS) to the McCarthy Group and World Herald Company in Omaha, Nebraska.

"Republican Senator Chuck Hagel disclosed in public documents that he was the Chairman of AIS and claimed between a $1 to 5 million investment in the McCarthy Group. In 1997, AIS purchased Business Records Corp. (BRC), formerly Texas-based election company Cronus Industries, to become ES&S. ONE OF THE BRC OWNERS WAS [CAROLINE] HUNT of the right-wing Hunt oil family, which supplied much of the original money for the COUNCIL ON NATIONAL POLICY. In 1996, Hagel became the first elected Republican Nebraska senator in 24 years when he did surprisingly well in an election where the votes were verified by the company he served as chairman and maintained a financial investment. 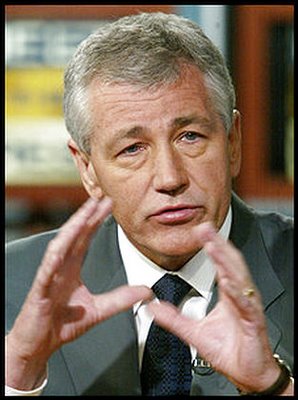 "In both the 1996 and 2002 elections, Hagel's ES&S counted an estimated 80% of his winning votes. Due to the contracting out of services, confidentiality agreements between the State of Nebraska and the company kept this matter out of the public eye. Hagel's first election victory was described as a 'stunning upset' by one Nebraska newspaper. ...

"Bob Urosevich was the Programmer and CEO at AIS, before being replaced by Hagel. Bob now heads Diebold Election Systems and his brother Todd is a top executive at ES&S. Bob created Diebold’s original electronic voting machine software. Thus, the brothers Urosevich, originally funded by the far Right, figure in the counting of approximately 80% of electronic voting in the United States.

"Like Ohio, the State of Maryland was disturbed by the potential for massive electronic voter fraud. The voters of that state were reassured when the state hired SAIC to monitor Diebold’s system. SAIC's former CEO is

"ROBERT GATES, former CIA Director and close friend of the Bush family, also served on the SAIC Board. Wherever Diebold and ES&S go, irregularities and historic Republican upsets follow. Alastair Thompson, writing for scoop.com of New Zealand, explored whether or not the 2002 U.S. mid-term elections were 'fixed by electronic voting machines supplied by Republican-affiliated companies.' The scoop investigation concluded that: 'The state where the biggest upset occurred, Georgia, is also the state that ran its election with the most electronic voting machines.' Those machines were supplied by Diebold." 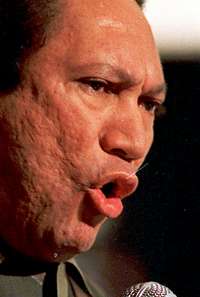 "Documents illustrate that the Reagan and Bush administration supported computer manipulation in both Noriega’s rise to power in Panama and in Marcos’ attempt to retain power in the Philippines. Many of the Reagan administration’s staunchest supporters were members of the Council on National Policy."118 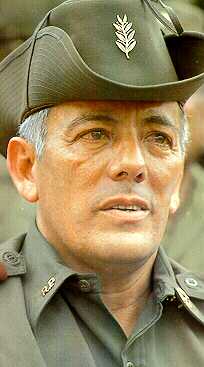 Noriega succeeded Torrijos to power. Michael J. Niman, a journalism instructor at Buffalo State College, writes that in 1981, Panamanian General Omar Torrijos "thumbed his nose at the Reagan/Bush administration and threatened to destroy the Panama Canal in the event of a U.S. invasion. Torrijos died shortly thereafter when the INSTRUMENTS IN HIS PLANE FAILED TO FUNCTION UPON TAKEOFF. Panamanians speculated that the U.S. was involved in the death of the popular dictator, who was replaced by a U.S. intelligence operative, Manuel Noreiga, who previously worked with George Bush Senior."119 Former CIA jackal John Perkins, in his book Confessions of an Economic Hit Man, reports that Torrijos was assassinated by order of American businessmen who arranged for a bomb to be planted aboard his plane. He died shortly after the inauguration of Ronald Reagan.

The motive was the fierce opposition of American business interests to talks Torrijos engaged in with Shigeo Nagano and other Japanese corporatists who wanted a share in development of the Panama Canal. Noriega also wrote of the episode in America's Prisoner, verifying that ruthless business interests in the U.S. were displeased with the negotioations. 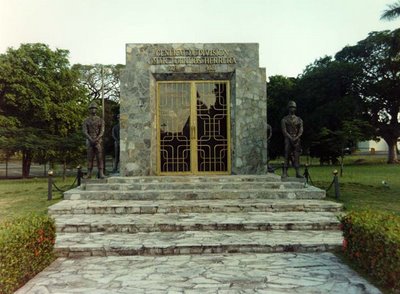 The many disparate names, histories, etc. are now finding a center of gravity in the Hunt family, Caroline in particular. Caroline and the Council for National Policy.

Now to lay the first layer of icing on the cake, as reported by Canadian author Jeff Wells (Anxious Rainbow) on March 20, 2000 – the origin of Jack Abramoff and the interminable "culture of corruption":

" ... in the long run, what we need more than anything is for money to be invested in the future of a democratic alternative. Ever since the early 70's, the right has been pouring money into their think-tanks and other institutions. Not only that – they've regularly sought out PROMISING YOUNGSTERS and brought them aboard. JACK ABRAMOFF AND PALS WERE TAKEN INTO THE COUNCIL FOR NATIONAL POLICY THROUGH ITS YOUTH MOVEMENT when they were just out of college, and were GIVEN well-funded organizations to run. Groups like the Intercollegiate Studies Institute and Morton Blackwell's Leadership Institute are still at it today ... "120

The second layer of icing relates to the election theme. It has recurred in this investigation, given us ES&S and DIEBOLD. The realization comes that Caroline Hunt and Darwin Deason (among other persons of interest) have long been partners in directing ES&S.

There is a legion of skeletons to exhume here.

More icing: The post-Kennedy assassination cabal has its hands in the elections process (see parts 1, 8 & 16), and with this another mystery is explained – why this clutch wanted the SMART CARD, the beating heart of emergent voting technology.

Dominance of smart card patents and technology has numerous advantages. It enables covert human target tracking (the Italians used it to locate CIA agents) and data mining, may well combine with various emergent technologies related to satellite technology and digital communication (future prospects may even include bio-engineering via stem cell research ... such as that conducted in the California state University system ... under the auspices of Dynes, Hellman, Moores & Co.), but also, to view it in the short-term, the rigging of elections. 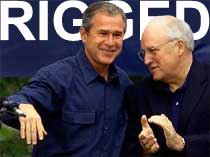 There are any number of ways to set the card to throw an election, as the Freedom to Tinker web site notes:

"One of the problems in voting system design is making sure that each voter who signs in is allowed to vote only once. In the Diebold AccuVote-TS system, this is done using smartcards. (Smart cards are the size and shape of credit cards, but they have tiny computers inside.) After signing in, a voter would be given a smartcard — the 'voter card' — that had been activated by a poll worker. The voter would slide the voter card into a voting machine. The voting machine would let the voter cast one vote, and would then cause the voter card to deactivate itself so that the voter couldn’t vote again. The voter would return the deactivated voter card after leaving the voting booth."121

Who controls the smart card technology? The Hunt cabal ... the core of which advocates the death penalty for homosexuals and alcoholics ... 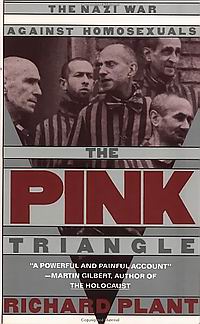 It's a VERY conservative cabal ...

But there are still so many names, histories, etc. to reconstruct, and you are completely unaware that the leads will drag you into places you didn't imagine, and didn't particularly want to go ... 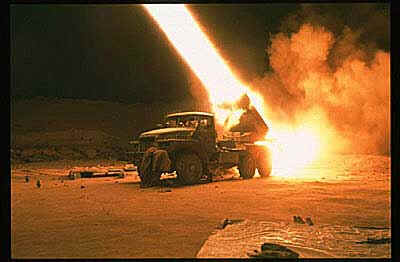