... Also interesting to note that L-3/Titan's GSI division was situated next door to Archer Logistics – a firm run by by Brent Wilkes – "like any good neighbors, they certainly do business together. Archer Logistics is an approved distributor for L-3's night vision Holographic Weapon Sights for M4 guns, used by U.S. soldiers in Iraq," CorpWatch reported.69

Wilkes, however, for all the ink that has been spent on him, was a CIA bit-player – it is the big boys in multinational industry and finance who make wheels like Wilkes go 'round. Step back and look at all of this from another perspective, a historical, geo-political one.

The Allies rolled back and crushed the German military in 1945, but not the covert operators of the Nazi Party who fled the wasteland via escape routes set up every 40 miles along the German border. They left behind an industrial base tainted by failed world conquest and genocide. The German-American barons of industry who profited from the chaos that left 50 million dead were faced with a pressing public relations dilemma.

In his postwar biography of Martin Bormann, Hitler's secretary, Paul Manning described a photo op event *staged* on June 5, 1972, featuring Chancellor Willy Brandt at Harvard with an announcement that the German government would graciously donate $47-million toward the creation of a German-American foundation – "a statesmanlike approach to the recovery of former enemies." Brandt pledged that the German-Marshall Fund would be "an independent American-run educational foundation" to study and recommend "solutions" to European economic problems.

Manning notes that the mission of the German George C. Marshall Research Foundation is "public relations, to cosmetize" the industrial-financial underpinnings of Hitler's Reich.70

Some of the corporations and organizations that have made substantial contributions to the German-Marshall Fund, a division of the Bormann Brotherhood:

In October 1978, the German-Marshall Foundation sponsored a luncheon chaired by Wall Street's John J. McCloy (Nazi recruitment, Pentagon design, J.F. Kennedy murder cover-up). Hermann J. Abs (1901-94 – Hitler's banker, "architect" of the postwar German "economic miracle," honorary president of Deutsche Bank A.G., to be cherry-picked by the Pope after the P-2 Masonic money-laundering scandal to reorganize the Vatican Bank) addressed this conclave of "businessmen and bankers and members of the Foreign Policy Association in New York City on the ‘Problems and Prospects of American-German Economic Cooperation.’"

Rubbing elbows with McCloy and the Reich's ranking banker at the dais were "Henry H. Fowler, Wall Street investment banker and former U.S. Secretary of the Treasury; Henry Cabot Lodge, former U.S. ambassador to the Federal Republic of Germany; George C. McGhee, another former American ambassador to West Germany, also a trustee of the Marshall Foundation and a member of various private and government advisory groups. These, along with the others on the dais and in the audience, represent firms and banks that are among the most prestigious in the United States and throughout the world." Every one of them had one thing in common – "all benefited from the rebirth and rebounding prosperity of the new Federal Republic of Germany. Knowingly or no, these figures and their corporations are indebted to the man who was not there, the financial and administrative genius who set the foundation for the postwar recovery of West Germany, Martin Bormann."72 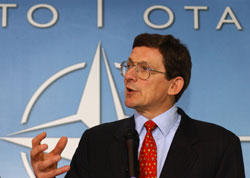 Under Secretary of State – and nuclear black marketeer – Marc Grossman of the German Marshall Fund and the Cohen Group lobbying firm.

Wind forward to the present. At the State Department under Condoleeza Rice, a trustee of the German-Marshall Fund is her deputy, one Marc Grossman, vice chair of the Cohen Group, Lockheed lobbyist and black marketeer.71 As trustee of a German industrial front set up by Nazi Bormann, Mr. Grossman might be expected to maintain connections to international terrorists.

Pakistani journalist Amir Mateen of Karachi News Service reported – one day before the air assaults on New York's World Trade Center – that Pakistani ISI Chief Mahmoud, a CIA surrogate, best-known for transferring $100,000 to Mohammed Atta, was a "week-long presence in Washington" before the destruction in Manhattan, prompting "speculation about the agenda of his mysterious meetings at the Pentagon and National Security Council... Official sources confirm that he met [George] Tenet this week. He also held long parleys with unspecified officials at the White House and the Pentagon. But the most important meeting was with MARC GROSSMAN, U.S. Under Secretary of State for Political Affairs. ... "73

Another German-Marshall trustee who served as deputy secretary under Condoleeza Rice, from February 22, 2005 to July 7, 2006, was Robert B. Zoellick. The State Department web site posts these career highlights: 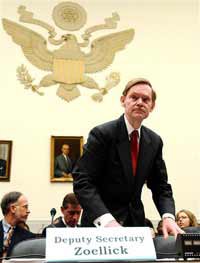 "During President George H.W. Bush's Administration, Mr. Zoellick served with Secretary of State James A. Baker, III, as Under Secretary of State for Economic and Agricultural Affairs, as well as Counselor to the Department (under-secretary rank).... He served as the senior U.S. official in the 'Two-plus-Four' negotiations for German unification and worked closely with Secretary Baker on the policies pertaining to the end of the Cold War.... Mr. Zoellick received the Distinguished Service Award, the Department of State's highest honor. The German government awarded him the Knight Commanders Cross for his role in developing the U.S. strategy toward German unification. the U.S. strategy toward German unification. From 1985 to 1988, Mr. Zoellick served at the Department of the Treasury in various positions, including Counselor to Secretary James A. Baker, III."74 Choice stuff.

The German-Marshall Fund is a Nazi military-industrial front, and its presence at the State Department is a statement on American foreign policy, undeniably ... but of immediate interest here is another GMF trustee and torch-bearer of Bormann's dream: "Jeffrey A. Goldstein, Managing Director, HELLMAN & FRIEDMAN LLC"

The managing directors of Hellman & Friedman are a hair-raising lot. At the H&F web site, we find:

Brian M. Powers – Mr. Powers is Chief Executive Officer of Hellman & Friedman. He oversees the firm's day-to-day activities. Powers a Director of AXEL SPRINGER AG and ProSiebenSat.... (Greg Pavlik, writing in the Rothbard-Rockwell Report in 1997: "The U.S. Senate’s Church committee reported that ... German media magnate Axel Springer received the then-substantial sum of more than $7 million from the [Central Intelligence] Agency to build his press empire. His relationship with the CIA was reported to have extended through the 1970s.76)

Jeffrey A. Goldstein – Mr. Goldstein serves as a Member of the Board of Trustees and Chairman of the Investment Committee of Vassar College, Trustee of the German Marshall Fund, member of the Council on Foreign Relations.

Mark Fariborz – a Director at Hellman & Friedman in the New York office. Prior to joining the Firm in 2006, Mr. Fariborz was employed by The CARLYLE GROUP ... 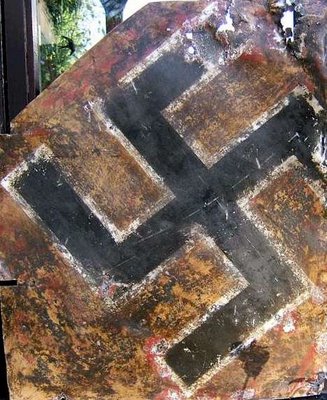 Constantine A., "Adnan Khashoggi Linked to 9/11 Terrorists, Part 37:
Mercenaries," – "[Grossman's] importance is multilateral. Mark Grossman is considered a key figure in the Plame investigation, but proescutor Fitzgerald has his own hidden conflict-of-interests, and is not likely to make substantive progress in the case against any ranking official. A Wikipedia entry explains his appointment, and when considered in context, why the investigation has no legs: ' ... Fitzgerald was named by Deputy Attorney General James B. Comey after then-Attorney General John Ashcroft recused himself from the case due to conflicts of interest. ..." Comey "appointed the U.S. Attorney in Chicago, close friend and former colleague Patrick Fitzgerald, as Special Counsel to head the CIA leak grand jury investigation.
In August 2005, Comey left the DOJ and he is now General Counsel and Senior Vice President of LOCKHEED MARTIN."3 The deputy AG has been richly rewarded. Fitzgerald can expect the same if he plays ball. Off duty, Mark Grossman sits on the Cohen Group board of directors - and Cohen interlocks neatly with Lockheed's board. As mentioned, James M. Loy, senior counselor at the Cohen Group, directs Lockheed, and so does Joseph W. Ralston, vice chairman the Cohen Group – a Lockheed Martin sub-contractor."
http://911review.org/Alex/Khashoggi-37_COHEN_DEAN.html