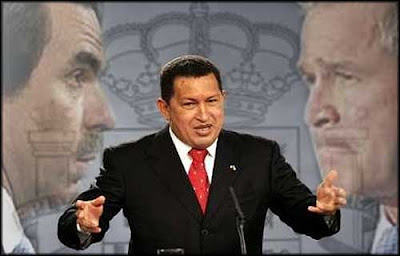 Yesterday morning, Caracas awoke to the news in the Venezuelan daily paper, 2001, that US intelligence sources had reported the existence of a secret agreement between Iran and Venezuela whereby Iran will be sending nuclear weapons to Venezuela and Cuba.

Venezuelan Minister of Foreign Relations, Ali Rodriguez Araque, was up before the Caracas morning traffic had begun, denying the claim as “absurd” in an interview with Venezuelan Television. “It tops a chain of absurdities that have been unloaded on Venezuela in recent years," Rodriguez continued. "We have no arms deal with Iran, and the country’s military relations are totally clear and public."

He indicated that Venezuela believes in the elimination of all weapons of mass destruction in the world, although he added that any country should have the right to use nuclear energy with peaceful goals. He went on to condemn the intense US propaganda campaign to portray Iran as a “dark beast.”

Curiously, yesterday’s 2001 article, which caused the stir, is no longer available online.[1] In its place is an article on the Minister’s reaction.[2] A reaction, which has been covered by over 80 media outlets around the world. But according to the AP, which reported only a tiny blurb on the piece, “other papers did not carry the [original] report and the newspaper did not give any details about how it obtained the information.”

A deeper investigation, however, reveals an uncanny similarity between yesterday morning’s 2001 article and the information found in an article by former self-proclaimed criminal and current US law-enforcement collaborator Kenneth Rijock.

According to Washington Technology, “Kenneth Rijock [was a] former banking lawyer and money-launderer in Miami in the 1980s, who spent two years in jail for his crimes and is now teaching law enforcement how financial criminals work and think.”

In 2000, he proudly testified before the House Subcommittee on Financial Institutions, that he is “a veteran of over one hundred domestic and international bulk cash smuggling operations.”[3]

But lately, it seems, he’s been busy doing anything he can to defame Latin America, Cuba, and especially Venezuela. Writing for various websites under the tagline of “Financial Crime Consultant” or “Investigative Reporter,” over the past three months, he has written articles accusing President Chavez of money-laundering Venezuelan funds offshore and of promoting a foreign policy that “can only result in an armed conflict in the Caribbean.” Of course, as Rijock explained in one of his recent articles, his sources “must remain anonymous for their own safety.” Which explains why rarely is anyone cited.

Last month Rijock charged the director of the Venezuelan daily paper, Diario Vea, Guillermo Garcia Ponce with arranging to buy nuclear missiles from North Korea. Garcia adamantly denied the charges and according to Prensa Latina, “added that such lies are part of the US drive to destabilize the Chavez administration, and recalled that weapons of mass destruction were the pretext to justify the war on Iraq.” 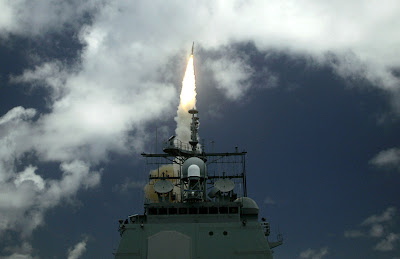 Rijock’s article is entitled “Chavez Assists Castro In Moving Offensive Weapons Into Cuba,” and is found on Ryan Mauro’s worldthreats.com.[4] Although the page cites petroleumworld.com as the primary source for the article, Petroleum World editors have confirmed that they have never published a Rijock article by that name. Which is not surprising, considering that this does not seem to be the only sourcing problem the website has. Rijock’s article is undated. There also appears to be a Spanish version of the article, published under a different title, at La Nueva Cuba on March 13.[4a]

Yesterday morning’s article in 2001 was written by veteran journalist Jesus Eduardo Brando, and entitled “Iranian Missiles for Venezuela.” Beyond talk of the Venezuelan delegation that visited Tehran last week, for the “Third International Conference in Support for the Rights of the Palestinian People” and a brief explanation of the Iranian nuclear program, the bulk and most tantalizing meat of this article is the nearly top-secret information that it claims that US intelligence agencies have reported.

However, with a close comparison of the Rijock and Brando articles, it becomes impossible to negate the fact that not only does all of the supposed “US intelligence” information from the Brando article come directly from Rijock’s piece—even down to an off-hand reference to the Chernobyl disaster—but, moreover, that Brando is actually referring to the Rijock article when he cites “sources of US intelligence.”

In the opening paragraph of yesterday’s 2001 article, Brando writes:

“US Intelligence agencies report.... Nuclear weapons would be transported in oil tankers in order to evade satellites and spy planes. This would enormously increment the offensive capacity of the Cuban regime and of true threat to the security of the United States.”[5]*

“It is believed that Venezuelan oil tankers will be the method of shipment, thereby concealing the cargo from any prying overhead spy satellites or American aircraft. These missiles will give the Castro regime an offensive capability that, in essence, will affect the balance of power in the Caribbean, and pose a threat to the US.”

Towards the end of his article, Brando writes:

“The reports add that this would constitute a nightmare for the Western Hemisphere that should be seriously considered. They warn against the danger of accidental detonation or the release of radioactive material as occurred at the Russian plant Chernobyl.”[6]

“That nightmare should make all of us in the Western Hemisphere wake up in the middle of the night, but there is another alternative threat to consider.... Will there be an accidental detonation... that would make the Chernobyl disaster seem tame.”

In his last paragraph, Brando writes:

“[The reports] suggest that Washington take a moment of attention, in the middle of its focus on Iraq to ‘insure that those missiles never get to Venezuela.’ At the same time they ask questions about whether it is once again time to toughen positions against Cuba including the possibility of a new blockade and “action against Venezuela and Señor Chavez.”[7]

Rijock writes in one of his last paragraphs:

“The real issue is whether the United States will take a moment from its focus on Iraq and insure that those missiles never get to Venezuela.... Is it time for a hard look at another blockade of Cuba? Other alternatives include external action against Venezuela, so Senor Chavez' tenure as President of his country could soon to come to an end.”

This leads us to the question of whether Rijock is on the take from the US government. Rijock’s history of work with US Law Enforcement after his time in jail is adequately documented, so it wouldn’t be out of the question. But considering his outrageous reports, undocumented claims, and criminal history, it is most likely he is being paid to disseminate misinformation, disinformation, and lies, and not to actually collect “intelligence.” As VEA director Garcia Ponce responded last month to Rijock’s accusations against him, “such lies are part of the US drive to destabilize the Chavez administration.”

As for veteran journalist Jesus Eduardo Brando, it is hard to believe that he was unaware that Rijock’s article was not in-fact “a US intelligence report.” Even given the benefit of the doubt, the use of unconfirmed information written by a self-proclaimed criminal at best results in an absolute disregard for journalistic ethics and at worst; misinformation, manipulation and outright lies.


All necessary translations have been done by the author of this text, and sources have been cited: