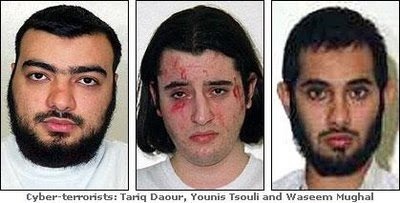 Two articles here, the second bearing the thesis ... "Wishing to show how al Qaeda was beating the pants off the good guys on the Internet, [accused terrorist] Tsouli was the perfect example for them, one of FEAR-MONGERING at its finest. ... "


Official denials that there WAS a bomb plot (excerpted from the ending of the first article and placed up front for emphasis):

• "Lorin Mock, the chief of the city's Emergency Preparedness Division, said the city was not notified of the plot. Mock said threats NOT DEEMED CREDIBLE are typically not passed on to the city."

• "The local office of the FBI issued a statement saying that 'hundreds' of threats were investigated in 2006 resulting in criminal charges in the U.S., Great Britain, Bosnia and Canada, but that the one centering on Mayport was "NOT CREDIBLE."

• "'The threat that is referenced in today's published report was thoroughly investigated by the FBI and DETERMINED NOT TO BE CREDIBLE,' the FBI said in its statement."

Yet convictions were handed down ...

Three Muslims in England who used the Internet to incite terrorist attacks included Mayport Naval Station among their targets.

The men were convicted in London of inciting terrorist murder on the Internet and given sentences of six and a half to 10 years, according to the Central News Service in London. The sentencing came after a two-month trial. The men were arrested in October 2005.

Details of the plans were found on a Web site run by one of the three and included discussion of using car bombs and rocket-propelled grenades to attack Mayport.

"The first target, which will be penetrated by nine brothers, is the naval base which gives shelter to the ship Kennedy," read one message, which is thought to refer to the aircraft carrier John F. Kennedy, which was based at Mayport until it was decommissioned in March.

The message also referred to targets off the base: "These are clubs for naked women, which are opposite the First and Third units."

Younis Tsouli - irhabi007 - was earlier this month jailed for ten years. It's a good sentence for the cyber-jihad twit, someone who became fodder for television news shows like 60 Minutes. Wishing to show how al Qaeda was beating the pants off the good guys on the Internet, Tsouli was the perfect example for them, one of fearmongering at its finest.

Tsouli was called the "jihadist James Bond," which would seem something of an insult to Ian Fleming, and was most often credited, as a so-called Godfather of al Qaeda's cyberterrorism operation, with world wide distribution of videos of the murders of Nick Berg and Daniel Pearl.

He was part of a "cyber-jihad" trio with Tariq al-Daour and Waseem Mughal - they pled guilty and were sent over for slightly less time.

However, Internet jihad is not quite like Iraq or Afghan jihad, none of the three became an expert in the study of inkjet cartridges and then set himself on fire in an attempt to get at airport patrons, like Kafeel Ahmed. Judge Charles Openshaw commented that the trio had used the Internet to encourage the killing of "kuffars" although "[Tsouli]" came no closer to a bomb than a keyboard." There can be no argument with this, but also interesting was the idea that the case had uncovered a nascent plot of "45 Muslim doctors in the US who threatened to use car bombs and rocket grenades in terrorist attacks in their home country," according to the Observer.

"The details of the terror discussions were found at the Shepherd's Bush home of the [cyber-jihad trio's} 23-year-old leader Younis Tsouli, reported the Evening Standard.

Fortunately, we have a copy of the e-mail chats on the "plot" and it's certainly worth a look over.

By now, there is enough evidence on the books to indicate that al Qaeda terror men - or jihadists inspired by them - engage in the hatching of many plots, some of which are utter nonsense and a few of which have been carried out only to fail in everything except the generation of spectacular publicity, and claims from leaders which spit belligerently into the face of anyone with common sense. By example, "A recent terrorism plot in London and Scotland has America's defense system on alert, [Department of Homeland Security leader Michael Chertoff]" told the Los Angeles Times.
"If you look at that picture, you see an enemy that is improving itself..."
But back to the Tsouli plot on America.

"Recently, we have begun to understand that our dear and venerable shaikh OSAMA was send [sic] by Allah to be the thorn in the throat of all those who are hostile to the creed of 'there is no God but Allah and Muhammad is his messenger,'" begins a series of recovered e-mails.

"So, despite the fact that we are not members of al-QA'IDA we are members of the trend, in that al-QA'IDA's objective is the same as that of any united group or course of action. "We are 45 doctors and we are determined to undertake Jihad for Allah's sake, and to take the battle inside damaged America, Allah willing."

At this point, we begin to edit all the references to Allah's will and willingness from the text for the sake of a less deadening narrative.

"The first target which would be penetrated by 9 brothers is one we know back to front; it is the naval base which gives shelter to the aircraft carrier Kennedy which is here now," it reads. "The anticipated number of pig casualties is 200-300 and the complete destruction of the Kennedy and 12 of its smaller support vessels as well as 13 Apaches. By the way, one of the brothers who is a military pilot will take part in the attack using one of the aircraft... His mission will be to give air cover after one of the brothers completes his task of targeting the main electricity generator in the town, and he will then confront any air support which comes to give aid. This will take 1.5 to 2 hours at the quickest. He will direct them to locations where there are American soldiers, deceiving them that they are terrorists at that moment. After that, our brother will leave to spread terror in the town - let them taste the flavour of bombardment - and he will concentrate on the nightclubs."

Although not indicated in the substance of the e-mails, the plotter is presumably referring to Mayport, Florida, which was the home port of the John F. Kennedy.

What the plotter does not seem to know - more shabby jihadi research - is the Kennedy was the dowager of the American carrier fleet. Old and broken down, in recent years it regularly failed readiness inspections, so badly that its commander was relieved in 2001. This limited its deployments, resulting in it being more or less permanently moored at Mayport from 2005 until it was decommissioned earlier this year.

The jihadi is also a little off in his estimation of the Kennedy's crew complement. Whereas he modestly estimates sinking the Kennedy will result in two to three hundred deaths, the ship's company consisted of around three thousand crew and an additional twenty-five hundred attached as its air wing. Which leads one to be suspicious the plotter has never actually seen the Kennedy or been to Mayport.

The Kennedy was to be attacked with six carbombs - specifically Chevrolets - and fishing boats driven by "American sisters" who had converted to Islam after 9/11.

If you are beginning to smirk, the next bits will do nothing to wipe it from your face.

"Petrol tanks" will be blown up with rocket-propelled grenades and the thought of it - "excuse me, tears are pouring from my eyes," writes the plotter. He is saddened because the martyrs will have been burned beyond recognition, a point he makes repeatedly.

"[Our] experience of preparing car-bombs is zero, except for a method which one of the brothers who is an engineer invented, using 40 gas cylinders tied together with one detonator," continues the plotter, leading one to imagine how forty cylinders will be shoehorned into a Chevy, perhaps a Suburban SUV.

The six car bombs, writes the plotter, will hit EIGHT targets, including nightclubs where "naked women" dance so that additional casualties, "50-80 whores," can be generated. "Allah willing," of course.

The plotter will keep the US Air Force at bay with "a sophisticated anti-aircraft weapon - which the American forces have not used yet."

The operation will conclude with a bombardment of the town and the entire thing will be photographed from the ground and the air for posterity. Three American Army soldiers will also be part of the operation.

After the attack is concluded, the next target, writes the jihadi, "[Don't] be surprised - it's an operation we have called 'Operation to free the lions of Camp Delta.'" Camp Delta is the US terror gulag at Guantanamo.

"If you have any questions, please ask," concludes the jihadi.

Perhaps this is to be taken at face value and it is wrong to cast a supercilious eye on such e-mail chatter, recovered during legal proceedings from the war on terror.

On the other hand, it might be good for morale and the critical facility to not only view the jihadis and their desires to kill "naked women," "pigs" and "kuffars" with contempt, but to more frequently hold their practical initiative and know-how in the same regard.
Posted by Alex Constantine at Friday, August 03, 2007