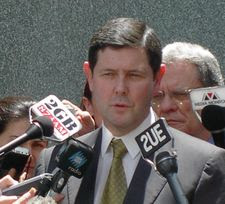 GlaxoSmithKline manufactures and distributes contraceptive pills and is involved with producing the so-called abortion drug RU-486.

The Howard cabinet has grappled with the contentious issue of allowing the prescription of RU-486 in Australia. As a member of cabinet Mr Andrews has also been involved in decisions relating to the multimillion-dollar funding of national and international reproductive health programs.

Mr Andrews, who has been a central figure in the controversy surrounding cleared terrorism accused Mohamed Haneef, immediately distanced himself from the organisation when questioned by The Sun-Herald about his advisory role.

"Minister Andrews was asked some years ago if he would agree to be what is equivalent in Australia to an 'honorary patron'," a spokeswoman for Mr Andrews said. "He has not been asked for, nor given any advice, nor is he involved in the operations of this organisation."

On the federal pecuniary interest register, along with his associations with conservative Catholic groups, Mr Andrews describes himself as an "adviser" to LDI.

His wife, Margaret, a marriage educator, is also on the LDI board but that association has not been listed on Mr Andrews's pecuniary interest register as required.

Mr Andrews refused to answer further questions about his association with the group when pressed by The Sun-Herald.

Those questions included whether he had a conflict of interest as an Australian cabinet minister who could make decisions that affect companies boycotted by the extremist body he advises.

He also refused to answer whether he supported their aims and methods, why he accepted the board position if he was not involved in the operations of the organisation and whether or not he had informed his cabinet colleagues of his association with the radical pro-life group.
Emails to LDI about Mr Andrews's role went unanswered.

LDI is vehemently opposed to any organisation that provides abortion or sexual reproduction advice.

Their main target is Planned Parenthood Federation of America.

A similar organisation, Planned Parenthood of Australia Group, is the largest provider of abortions in Australia and has been operational since the 1980s.

Established in the early 1990s, LDI claims to "educate corporate officials about the agenda of Planned Parenthood in an effort to convince them to deny financial support to the extremist group".

LDI advocates boycotting corporations that support Planned Parenthood so "those who value human life do not indirectly fund its deadly agenda". A list of boycott targets that includes corporate names, subsidiaries, products, services and contact details for each company is regularly updated.

Mr Andrews's judgment has been questioned over his intervention in the Dr Haneef affair.

His lacklustre performance in the industrial relations portfolio caused Prime Minister John Howard to shift him sidewards to immigration in a reshuffle in January.

Source: The Sun-Herald
Posted by Alex Constantine at Sunday, August 05, 2007