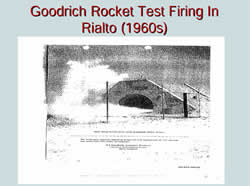 "... Investigators have yet to determine the cause of the crash, but suspicion has fallen on everything from problems with the jet's thrust reverser, to pilot error, to the short-slippery runway at Congonhas that provides little margin of error for pilots attempting land.

"Also named in the suit are International Aero Engines, which manufactured the plane's thrust reverser, and GOODRICH CORP., an AEROSPACE and DEFENSE parts supplier, which in addition to manufacturing the braking systems, has a contract with TAM to MAINTAIN THE THRUST REVERSERS, Martinez-Cid said. ... "

"The plane began operating without the cabin floor lights between July 12 and December 2 of 2004, the FAA said. FAA spokesperson Paul Turk said Tuesday, January 10, that the FAA is proposing the financial penalty because the alleged violation went on for so long, and because the airline continued to fly the plane even after it had been notified of the possible problem. ... "

A bit of background on Goodrich, a major aeronautics defense contractor:

"About $30.1 million was spent last year on various lobbying activities, the majority of it going to salaries for the nearly 912 registered lobbyists at the Capitol. Smaller amounts of the spending went to contributions to campaigns, advertising campaigns, entertainment of lawmakers and other expenses.

A new report released today reveals that Goodrich Corporation, along with other companies responsible for California perchlorate pollution in drinking water, are funding a coordinated effort to downplay the risks of contamination to public health.   The new report, entitled The Politics of Rocket Fuel Pollution: The Perchlorate Study Group and Its Industry Backers, describes an effort reminiscent of tobacco industry tactics to stave off efforts to regulate exposure to second-hand smoke.  Tactics employed by Goodrich and other perchlorate polluters include commissioning studies that appear to have employed an experimental approach inappropriate for determining the full health impacts of exposure to contamination and even hiring the same public relations firm as Phillip Morris did to run an anti-regulation campaign around second hand smoke.  “Instead of spending on cleaning up the contamination it has leaked into Rialto’s water supply,” stated Sujatha Jahagirdar report co-author and Clean Water Advocate for Environment California, “Goodrich is instead spending on efforts to downplay the health risks of rocket fuel pollution in drinking water.”  Between 1957 and 1963, Goodrich Corporation (then known as B.F. Goodrich) owned and operated a rocket fuel manufacturing and processing facility in Rialto, a small working-class city located an hour east of Los Angeles. During its tenure, the company produced rocket fuel for the Loki, Sidewinder, ASP I and ASP II missiles. According to depositions given by former employees, thousands of pounds of waste rocket fuel from the manufacturing process were disposed of in a large unlined pit behind the Goodrich facility. Federal and state officials believe that the Goodrich facility and disposal pit into which thousands of pounds of the chemical were dumped are a source of the perchlorate pollution that has decimated the Rialto’s water supply.   Although contamination in Rialto’s drinking water supply was discovered nearly ten years ago, Goodrich continues to delay cleanup, which experts say will total well over $200 million.
“The residents of Rialto are the victims of environmental injustice--over 50 years the people of Rialto were drinking high levels of perchlorate in their drinking water because of Goodrich, and for the last ten they have had to bear the brunt of the cleanup costs.  Its far time that Goodrich stop investing money in getting of hook and investing money in perchlorate cleanup,” said Davin Diaz, PASE Director at CCAEJ.  According to a recent study conducted by the Centers for Disease Control exposure to perchlorate at levels well below one drop in an Olympic-sized swimming pool can lead to abnormal hormone levels in women who experience thyroid deficiencies.  Perchlorate exposure can also lead to conditions such as attention deficit disorder, learning disabilities and decreased IQ in infants.   Internal emails, documents and a search of available research reveals that Goodrich Corporation and other perchlorate polluters funded:

1. A campaign for weak regulation of rocket fuel spills, and not to ‘increase scientific and medical understanding of perchlorate’s risk to human health,’ as described by the group’s mission;

3. Scientific research that was then used to argue that rocket fuel pollution was not a big concern.  Perchlorate polluters like Goodrich funded more than half of all studies directly addressing the health effects of perchlorate exposure between 1996 and January 2005.  Independent sources like the National Institutes of Health funded less than 10 percent of the research.
Posted by Alex Constantine at Saturday, August 04, 2007