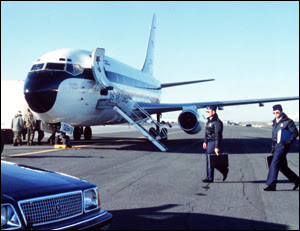 Jeppesen Dataplan, a provider of navigation charts, refueling plans and route planning based in Englewood, Colo., helped in more than 70 flights to move suspects to countries where they were not protected by U.S. law, the group said. The prisoners were tortured and interrogated, the ACLU said Wednesday in the suit.

The organization first sued Jeppesen in May, representing three people it said were on the flights. It refiled the case to add two others. The ACLU, citing a Council of Europe report, said Jeppesen misled European officials on the flights' destinations.

"Jeppesen falsified flight plans submitted to European air traffic control authorities to avoid public scrutiny of CIA flights," according to the suit, which was filed in federal court in San Jose. "Jeppesen intentionally submitted 'dummy flights' to various aviation authorities in order to conceal the true flight paths of the rendition planes."

It is not unusual for aircraft operators to file multiple flight plans because final destinations have not been determined or to avoid bad weather, said John Dern, a spokesman for Chicago-based Boeing.

He said the company's services are confidential. "As a matter of policy we don't comment publicly on any of the work done or services for any of our customers without their consent," Dern said, declining to say whether the CIA is a Jeppesen customer.

The ACLU sued under a law allowing non-U.S. citizens to bring claims against the government for violating the law of other nations or an American treaty. ACLU lawyer Ann Brick was not available to comment.