TAM Jet Sabotaged?: THE PILOTS DIDN'T KNOW OF FAILED THRUSTER - "Only one reverser. Spoiler nothing!" Last Words of the TAM Pilots Before Brazil Crash 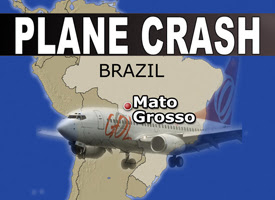 TAM executives have stated – but only after a Globo TV report exposed it – that one Flight 3054 thruster was inoperative. This was a known concern, but not a serious one because the thruster was only "complementary," "not essential" to landing. This all came, of course, after TAM's CEO stated that the airbus was in "perfect condition." So the spoilure failure was known, after all, per TAM's revised statements ... but on the cockpit tape transcript just released, the pilots are startled to find the thruster not engaging. They panic, react as if they were completely unaware of the problem.

Mechanical failure appears to be the cause of the "accident," not "pilot error" as the Luiz da Silva government suggested shortly after the crash, and THE PILOTS DID NOT KNOW about it.

I now hold open the definite possibility that the flight was sabotaged. In fact, sabotage - DELIBERATE OR NOT, this much is arguable - is the unavoidable conclusion at this stage in the investigation:

RIO DE JANEIRO, Brazil - The pilots of doomed TAM Airlines flight 3054 screamed "slow down!" and "turn, turn, turn!" seconds before their Airbus A320 skidded off the runway in Sao Paulo and slammed into a building last month, flight recorder transcripts revealed Wednesday.

According to transcripts read before a congressional commission investigating air safety in Brazil, the pilots were UNABLE TO ACTIVATE THE SPOILERS - aerodynamic brakes on the plane’s wings - as they sped down the short, rain-slicked runway.

"Only one reverser. SPOILER NOTHING," says pilot Henrique Stephanini Di Sacco, 53, giving the FIRST INDICATION that something is wrong.

The recording ends with screams and a woman’s voice, followed by an explosion. ...

IN OTHER WORDS, THE POSSIBILITY MUST BE EXPLORED THAT THE PILOTS WERE NOT INFORMED THAT THE SPOILER HAD BEEN DISENGAGED.

The story continues: "The congressional commission did not review the data recorder information publicly, but seemed to acknowledge the [Brazil Air Force] report’s accuracy by discussing how the information was leaked.

The commission’s president, Rep. Marco Maia, said he believes mechanical failure was behind the crash.

"From what we have determined, we can confirm that the machine failed," Maia told reporters in Brasilia. But he added that investigators must still "thoroughly examine all the possibilities."

Brazilian aviation consultant Elias Gedeon said it was too early to say if the pilot put the throttle in the wrong position.

Folha speculated that the plane’s computer system could have interpreted an incorrect throttle position as evidence the pilot was trying to take off again, automatically disabling the spoilers.

"There are signs that this happened," Gedeon said when asked about Folha’s hypothesis. "But we can’t say 100 percent this was the problem."

TAM’s press office declined to comment on the crash until the investigation is finished. Airbus spokeswoman Barbara Kracht said the aircraft manufacturer also could not comment on the probe, citing international aviation rules.

The airline has acknowledged that one of the jet’s thrust reversers, used for braking, had been deactivated before the crash. Planes are allowed to fly with only one functioning thrust reverser, but it can make braking more difficult.

Video footage of the plane landing showed it speeding down the runway more than three times faster than other planes.

According to the cockpit transcript, one of the pilots asked about conditions on the runway shortly before landing and was told: "wet and slippery."

Soon after the crash, some speculated that the runway, which is short and notoriously slick in rainy weather, contributed to the crash.

A finding that pilot error or mechanical failure was responsible would likely ease criticism of the government, which has been widely accused of failing to address Brazil’s aviation woes after a Gol jetliner went down in the Amazon last September, killing 154 people.

That crash touched off months of work stoppages and slowdowns by air traffic controllers, who complained of dangerous working conditions.

The runway at Congonhas had been shut earlier this year for renovations, but was opened before it could be grooved _ a process that helps water run off and provides better traction in rain.
Posted by Alex Constantine at Wednesday, August 01, 2007