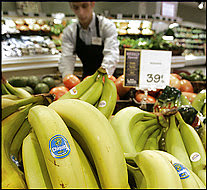 As Jonathan Schwarz recently noted, there is a deeply discouraging sameness about the outrages that dissenting writers must address — and a new front-page story in the Washington Post is a perfect example. In fact, it's a piece that could have been written any time in the last 100 years or more: "Feds Look the Other Way While United Fruit Company Peddles Death and Corruption in Latin America."

Today of course, the infamous United Fruit of yore (whose machinations in Guatemala led to a CIA coup that set off decades of mass-murdering chaos) is known by the more perky name of Chiquita, and conjures up cheery pictures of childhood banana-munching around the family table. But while corporations may change their spots (or their peels) and their personnel over the years, the nature of the beast remains much the same, because its raison d'etre remains the same: maximizing profit. And United Fruit/Chiquita has traditionally been willing to push the banana boat way out when it comes to ensuring that its exploitation of cheap labor remains undisturbed.

In the case of Colombia, this meant paying an officially designated terrorist gang — the vicious killers of the rightwing United Self-Defense Forces of Colombia (AUC) — to keep Chiquita's operations running smoothly in the war-torn nation. A whole sordid history could be written about the extensive intertwining of American government and corporate interests with AUC and the other rightwing Colombian militias, but for our purposes here it is enough to note that Chiquita not only paid AUC for protection from leftwing militias, it also took an active and direct role in "in smuggling thousands of arms for paramilitaries into the Northern Uraba region, using docks operated by the company to unload thousands of Central American assault rifles and ammunition," as the Post reports. In turn, the paramilitaries used these weapons "to fund operations against peasants, union workers and rivals."


"I regarded this as a murder investigation," says Roscoe Howard Jr., the former U.S. Attorney who spearheaded a prosecution of Chiquita for its death-squad collaboration, the Wall Street Journal reports. "Even though Chiquita didn't murder anyone, that's what the money was used for — to buy weapons."

Earlier this year, Chiquita the corporate entity paid a piddling $25 million to wash the blood from its gleaming office walls. But now some of the company's human factotums are facing personal criminal charges for facilitating the murder, kidnapping, rape and robbery of innocent human beings. To counter this, they are offering a modified version of the Nuremberg Defense; it's not exactly that they were "just following orders" from Der Leader, but they say they did receive implicit permission from the Bush Regime to carry on funding the Colombian death squads after corporate officials notified the Justice Department in 2003 of their involvement with AUC. As the Post notes:

...last week, lawyers for the former Chiquita executives sent letters to the Justice Department, asserting that their clients did not intentionally break the law but believed they were waiting for an answer from the highest levels of the Bush administration.

The man they sought out at the Justice Department the Assistant Attorney General, one Michael Chertoff, now the gut-checking head of Homeland Security. As the Post reports:

Chiquita, [company officials told Chertoff], would have to pull out of the country if it could not continue to pay the violent right-wing group to secure its Colombian banana plantations. Chertoff...affirmed that the payments were illegal but said to wait for more feedback, according to five sources familiar with the meeting...Sources close to Chiquita say that Chertoff never did get back to the company or its lawyers. Neither did Larry D. Thompson, the deputy attorney general, whom Chiquita officials sought out after Chertoff left his job for a federal judgeship in June 2003. And Chiquita kept making payments for nearly another year.

But as we all know, terrorism is in the eye of the beholder. And there were many in the Bush Regime who did not regard AUC as real terrorists; after all, they weren't Muslims, and they were only killing a bunch of piss-poor Latinos — along with political opponents of Washington's much-favored Uribe administration in Bogata. What's not to like? As the Post reports:

But legal sources on both sides say there was a genuine debate within the Justice Department about the seriousness of the crime of paying AUC. For some high-level administration officials, Chiquita's payments were not aiding an obvious terrorism threat such as al-Qaeda; instead, the cash was going to a violent South American group helping a major U.S. company maintain a stabilizing presence in Colombia.

As long as a "violent group" supports American policy or corporate interests, they can let rip. We see this dynamic in operation all over the world at the moment. It is part of a long-standing — and open — policy of the Bush Administration to arm and fund violent militias to do its dirty work. (Justin Raimondo has much more on this theme in "The New Turn," which is supplies good support to an earlier post we did here.)*

Of course, it is very good indeed that, against all odds, there remain some honest prosecutors in the federal justice system willing to do what should have been done a century ago: hold corporate chieftains responsible for the crimes they beget in their slavering pursuit of profit. But it also clear that the Chiquita executives were given the same kind of nod-and-wink for murky dealings that their illustrious predecessors have always received from Washington. That they may now be hoist on their own petard is their own tough luck; but they are certainly not the only ones who should be in the dock.