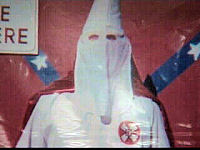 (07/30/07 -- HENDERSON) - For several weeks, the man accused of chasing a Henderson couple at gunpoint, has denied being a member of the Ku Klux Klan.

However, hours after speaking out, Eyewitness News obtained audio of a man who appears to be Anthony Finch, talking on a radio show organized by a white supremacist group, the National Socialist Workers Party.

The National Socialist Workers Party is reportedly the same group that has been sending out a mass mailing, threatening leaders of the NAACP.

The group has been printing out fliers urging Euro-Americans to aid a man at the heart of a racial incident. And it hasn't stopped with a flier.

The group is also on radio defending their decision to threaten NAACP leadership, which NAACP leaders want stopped.

"We see this as an uptake, as an escalation. And we take it as a threat against all NAACP and all people of good will," Rev. William Barber said.

The controversy started last month when Finch chased a black couple at gunpoint.

Police say the incident brings to attention whether Finch is a member or has been a member of the Klan.

"I've been a member of the Henderson Police Department and that's it for 23 and a half years, till I got sick and now I'm disabled," Finch claims.

Nevertheless, audio from a radio talk show, a man identifying himself as Anthony Finch of Henderson North Carolina spoke with a member of the national social workers party.

"What about your local Klan, the radio host said.

"Everybody sees that because it's a white on black affair they don't want to get involved. Really I feel like a t shirt on a clothes line. Hung out to dry.

The NAACP says its time for state leaders to step in.

The NAACP has also reported the threat to the FBI, an investigation is reportedly underway.
Posted by Alex Constantine at Wednesday, August 01, 2007